A Black Woman’s Place is in a Union 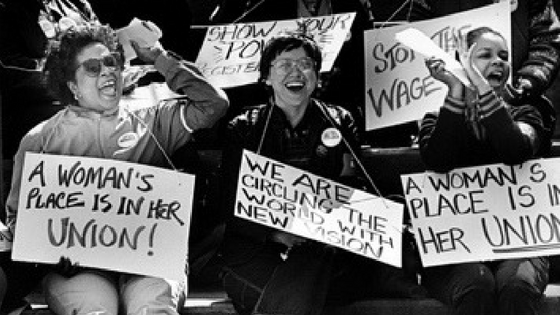 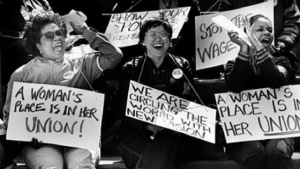 Black women struggle financially.  Many of us are doing better than many of our forebears, but on the whole, we have a sense that when it comes to who gets ahead, the U.S. is not exactly on the up and up.  For starters, we could be doing better if we were paid fairly for the work that we do.

I’m here to say that our intuition that our economic policies are not working for us is on the money!

Discrimination, past and present, is the cause of our struggle.  In addition, we don’t inherit wealth from family members who often faced even worse economic circumstances than our own.  And we work in lower paying jobs than others, including Black men.

The fact of the matter is that even when we hold “better paying, professional jobs,” due to sex discrimination, we can count on being underpaid relative to men who hold the same job – regardless of what the job is!  In How the Gender Wage Gap Differs by Occupation, Emily Baxter, a research associate at the Center for American Progress, points out,

“Male surgeons earn 37.76 percent more per week than their female counterparts […] And this does not apply only to high-paying, male-dominated careers: Women are 94.6 percent of all secretaries and administrative assistants, yet they earn 84.5 percent of what their male counterparts earn per week—a weekly difference of $126.”

A report from the American Association of University Women (AAUW) shared similar findings.  Specifically, a 2012 AAUW report controlled for workers’ relevant earning factors other than gender—education, hours worked, experience level—and still couldn’t account for 7 percent of the gap just one year out of college.

Add race discrimination to the mix, and the results get worse. Essentially, due to discrimination, Black women can count on unequal pay for the same work, regardless of the jobs that we hold.

Our situation gets worse as we move down the pay scale. Many of our sisters manage very challenging economics on a daily basis, and they have been doing so for years. They, like most employee laborers in the U.S., are suffering because the real value of U.S. wages has been on the decline for decades.  According to a report from Brookings, since the early 1970s, the hourly inflation-adjusted pay received by the typical worker has barely risen, growing only 0.2 percent per year. In other words, though the economy has grown, the primary way most people benefit from that growth – through wage increases – has almost completely stalled.  The result is that most jobs don’t pay as well as they used to.

This is particularly devastating for Black women.  Even though we are employed and working our collective fingers to the bone, we are not making more money and over twenty percent of us are poor.  If Black women are to advance in this society and take care of ourselves and our families, we must have the income to cover our basic human needs and more.

What can we do about it?

Okay, now we understand the problem: wages across the U.S. are pretty lousy for most people, and Black women’s wages are lower than anyone else’s due to sex and race discrimination.  What can we do about it?

Since Black women are among the nation’s most vulnerable workers, we need to support collective efforts to raise our wages.

You’ve heard the phrase, “Fight for 15″?  Black women activists and others are urging all of us to support a $15 an hour minimum wage nationwide.  This pay increase would help fast-food, retail, and home health care workers, and many other workers nationwide who struggle to earn a living wage.

Half of all U.S. workers are paid less than $15 per hour.  Earning $15 per hour would allow folks working a full-time job at 40 hours/week to generate annual pre-tax earnings of approximately $28,000 to $30,000; this annual income is technically above the federal poverty line for a family of four.  Workers who earn $15 per hour have a better chance at achieving economic self-sufficiency, which is a beautiful thing.

To join Black women leading this fight, reach out to your local, state and federal political representatives and tell them to promote a minimum wage of at least $15 per hour in your state.  You can also vote for politicians who support the Fight for 15.

“The two most dynamic and cohesive liberal forces in the country are the labor movement and the Negro freedom movement.  Together we can be architects of democracy.’

In addition, he believed that the labor movement was critical to interrupting the violence of poverty.

“The labor movement was the principal force that transformed misery and despair into hope and progress.  Out of its bold struggles, economic and social reform gave birth to unemployment insurance, old-age pensions, government relief for the destitute, and, above all, new wage levels that meant not mere survival but a tolerable life.”

As usual, MLK was right. U.S. workers, including Black women, have benefited from the labor movement and we need to continue to fight for systems that protect us from low and discriminatory wages, provide job security and better employee benefits.  We can do this by supporting American labor unions.

Statistics show that unions are good for Black workers in general, and for Black women in particular.  In Black Women in the United States, 2014: Progress and Challenges, by the Black Woman’s Roundtable, the authors show that Black women who work under collective bargaining agreements earn higher wages and enjoy greater access to benefits than women of all races and ethnicities who are not unionized. In fact, for Black women who are low-wage earners, union membership was a more significant factor than education in determining increased wages and benefits.  Unions also significantly boost the number of Black employees who have access to health and retirement benefits like employer-sponsored retirement plans.

Unfortunately, there has been a steady assault on labor unions in the U.S. for the past 30 to 40 years.  Participation in unions dropped from 23.2 percent in 1983 to 12.3 percent in 2015.  During the same time period, America’s middle class has struggled due to a decline in real wages.  #WonderWhy?

Unions are not all good (or bad).

As many have pointed out, discrimination exists within the labor movement as well. For decades, Black people were kept out of unions, and many unions have been sued for racial discrimination.  Nevertheless, for many workers, even discriminatory collective bargaining is better than the alternative – going it alone. Unions can keep workers in the economic game, by helping us earn wages that keep up with inflation, and secure health insurance and retirement benefits.

For Black women, who work so hard for so little, enough is enough.  We must support and follow the lead of our courageous sisters who are leading (and winning!) in the Fight for $15.  We must also come together with others to get the raises and benefits we deserve.  By joining unions and engaging in collective bargaining, we can achieve better outcomes.  Let’s do it now.  Our financial future can’t wait!

On Why Every Black Woman Needs a Plan to Protect Her Wealth: An Interview with Lori Douglass

Just Do It : An Interview With A’shanti Gholar on How and Why More Black Women Should Run for Office