Amtrak Regional 175 and an Homage to Black Women 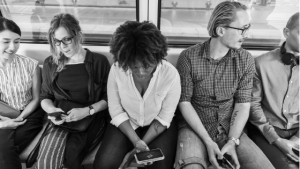 Hundreds of aggravated people had just boarded Amtrak Regional 175 from New York to Washington D.C.  The train was twenty minutes late, and it was also really full on arrival.  A lot of people were roaming from car to car, looking for a seat while lugging heavy bags. We all wondered if the train was oversold and if we would get a seat.

I made my way to the Café Car and was the third person to sit in a four-space bench. Others had the same idea and were flooding the Café Car.

The white man moved forward one café car seat away from the Black man to an empty seat across from me and said, “You’re an asshole!  You wouldn’t let me sit!”

The Black man said, “Why are you calling me names!?  Don’t disrespect me in public or you’ll regret it.”

The seated white man said “Are you kidding me?  You wouldn’t let me sit down.  You are a f—- asshole!  You want to teach me something, get up and do it!  Asshole!”

The Black man got up from his seat, and I started praying.  Suddenly, two angry men were close to blows right across from me.  The Black man said “You called me a name!  Keep it up, and you’ll have lots of reasons to call me a name.”

The Black man said, “Don’t call me a name again!” and then, listening to his friend, he sat down.

The seated white man (still across from me) said, “All I said is that you are an asshole, which you are for not giving me a seat. I didn’t call you a name.”

With that, John was on fire again!  “What?  Why are you calling me names man!  Don’t make me get up again!”

I went on high alert. I signaled to a couple of men sitting diagonally across from me.  “Is there a seat over there?”  With kind eyes, they said, “Yeah.” I got up and moved over in a hurry.

A Black woman spoke up from a distance. “Gentlemen,” she said, “It’s time to de-escalate this right now! We don’t need this.  I had a bad day at work.  All I want to do is have a drink and get to f—- Washington!”

The entire time that this drama was taking place the white man continued using the A-word and talking about how he didn’t do anything wrong. It must have looked like John was going to get up again because the Black woman who had had a bad day came running over to John.  “Don’t get up!  Stay seated!  You don’t need this!  We don’t need this.”  He shifted in his seat.  “I’m standing in front of you.  Are you going to knock a woman over to hit this man?” the Shero asked.

John stayed seated, but he did say: “Stop lying. You know you called me a name!”

The white man said, “I didn’t!”  Then a couple of passengers (Black women and white men) said “You called him an asshole several times.  That’s a name!”

The white man said, “But I only said it because he wouldn’t move over for me! He was being an asshole. Now, I am good.  I have a seat!”

The white man then got up to shake  John’s hand.  “Look,” he said, “I want to shake. You were being an asshole because you wouldn’t let me sit down, but I am not mad now. I have a seat.”

John said “Tell the truth!  I didn’t say you couldn’t sit here. I said I was a big man, so why would you want to sit next to me! Everyone on the train heard it.  Tell the truth!”

Suddenly, the conductor, a white woman, came through to take tickets.  The conversation ended as she shouted, “Tickets please!”

But there was something amiss.

Another conductor came up to her and asked if she was OK and if she heard what happened.  The conductor said she was fine, but that the two gentlemen had gotten into a verbal, almost physical altercation because Man B (she slyly pointed to the white man) called Man A an asshole, at least once.  Under my breath, I said, “He called him an asshole five times.”

The conductors put their heads together, and then she kept taking tickets.

At the next stop, four young Black and white police officers boarded the train, while three waited outside on the station platform. They told the man who called John an asshole to leave the train.

The white man expressed surprise.  “But I didn’t do anything!  I just got mad because he wouldn’t move his bag!”

Everyone stared at him and waited for the police response.

“Well, you provoked this gentleman and caused a problem.  A lot of people heard it.  You gotta’ go.”

After the police removed the offender, the car became delightfully animated. People talked with each other about how they felt during the situation. A lot of men shook John’s hand for showing restraint.  He explained how he remained (relatively) calm in the face of this public humiliation because he “knows the score.”  He also noted that “it helped that the sisters held me back and told the white man  he was a liar.”

While other people processed their feelings, I thought about what I had observed: John was right: it was the sisters who spoke up and put themselves on the line to keep a bad situation from getting worse.

One Black woman told both men to “de-escalate” and later got up to physically stop John.  Her courageous acts prevented John’s likely arrest and possible imprisonment. A second Black woman also kept her friend from losing his cool.

Other white men in the café car were on alert, but none of them got up or tried to school the white man who initiated and perpetuated the conflict; neither did the white women.  In the end, the conflict was prevented because of Black women. How is this possible in terms of current social constructs?

Here is my thesis.

Due to our historical role of living in Black America with our people and in white America as domestics and caretakers, we have experience in jumping in to resolve conflicts.  Even in a social hierarchy, which puts us last and thus, makes us deeply vulnerable, we still speak up to protect our families and calm divisive waters.

You see our skill in private and in public: in Stacey Abrams, who isn’t afraid to stand up for a fair election, in Michelle “When they go low, we go high” Obama, and in the Black women voters of Alabama.  We are the leaders and unifiers that America needs.

It is important to note that this story is not an homage to the “strong Black women,” which is a trope that I strongly resist because it does not serve Black women well.  Rather, this incident is a powerful reflection on how some Black women continue to lead and show up in spite of this dangerous world.  Many of us have a strength that America clearly needs in spades if we are to sew this country back together again.

And what of that BlackHer Shero on the train?  I bought her a drink and told her she was my shero.  She thanked me profusely and said, “Somebody was gonna’ get knocked out, right?”

“Damn straight,” I said, “Thank goodness you were there!”

On Creating a Culture of Civic Engagement that is Grounded in Love: An Interview With Nse Ufot