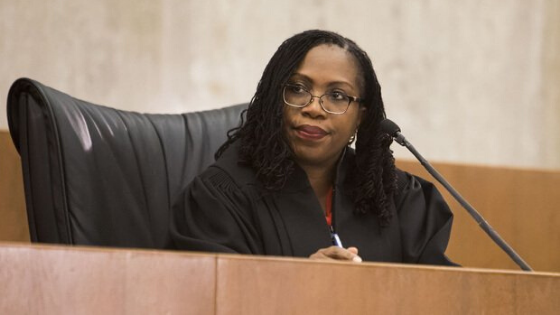 This past week, Democrats in the House of Representatives got one step closer to impeaching Donald Trump (finally!). Their win came after a federal appeals court upheld a lower-court ruling that former White House counsel Donald McGahn must comply with a subpoena issued by the House. This means that McGahn could be made to testify in the impeachment inquiry against Trump.

The real story here isn’t McGahn’s potential testimony. Of course, it will be interesting to hear what he knows, but we don’t actually need him to spill the tea to know that Trump has committed impeachable offenses. He proved himself unfit for office during his campaign and since that time he’s been engaged in numerous immoral and illegal activities, all the while throwing our nation into complete chaos.

Instead, we should be paying attention to the superstar judge who first said that McGahn must comply with the subpoena. In her ruling, U.S. District Judge Ketanji Brown Jackson decided that top presidential advisers cannot choose to ignore demands for information from Congress.

It is fitting that Jackson, a Black woman, isn’t allowing Trump and his cronies to get away with their shenanigans. Black women have been the front line of the resistance to Trump since day one. More than 90% of us voted for Hillary Clinton. Though Democrats are just now pursuing legal means to remove him from office, it was Rep. Maxine Waters who was calling for his impeachment before he was inaugurated. Senator Kamala Harris released a campaign ad calling Trump a sex predator and scam artist. We’ve been the truth-tellers and sheroes in this nightmare all along!

Jackson is well-qualified to take Trump and company to task. She earned her bachelor’s and law degrees from Harvard and worked in private practice and as an assistant federal public defender in Washington, DC. In 2009, she was nominated by our forever POTUS Barack Obama to become the Vice-Chair of the U.S. Sentencing Commission, the independent agency which sets the sentencing guidelines for the federal courts. The Senate confirmed her by unanimous consent. She was nominated in 2012 by Obama to serve as a judge for the U.S. District Court for the District of Columbia, the position she currently holds today.

In her 118-page opinion, Jackson pushed back against the Trump administration’s claims that top aides have immunity and cannot be forced to comply with Congressional requests. According to The Washington Post, Jackson wrote that “her conclusion was ‘inescapable’ because a subpoena demand is part of the legal system — not the political process — and ‘per the Constitution, no one is above the law.’”

Jackson had a strong message for Trump, who seems to believe that the president is a king and can do whatever he wants, including excusing people from participating in legal processes because they have better things to do. She wrote,

“However busy or essential a presidential aide might be, and whatever their proximity to sensitive domestic and national-security projects, the President does not have the power to excuse him or her from taking an action that the law requires.”

In other words, Donald Trump doesn’t get to decide that he and his friends are above the law. At least, not when Black women are in charge.

We may not get the impeachment we deserve and desperately need. It is likely that the House will vote to impeach Trump but Senate Republicans will not convict him. So, it’s probable that we’ll be stuck with Trump until the election when we can boot him out of the White House once and for all. But it won’t be because Black women didn’t step up to the plate and do everything we could to stand up to this madness. Shout out to Judge Ketanji Brown Jackson and all the Black women working hard to save our democracy every day!

On Covering the Black Innovation Economy: An Interview with Sherrell Dorsey