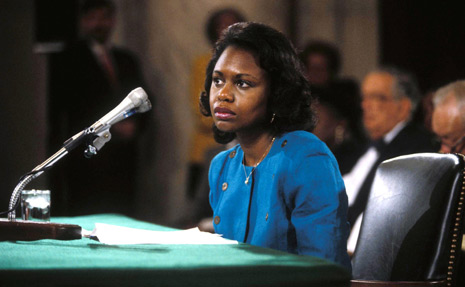 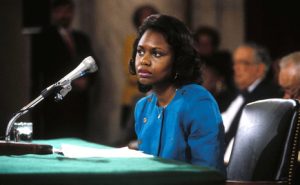 At a reception this weekend, I saw Anita Hill sitting quietly at a table while she waited to receive an award for her leadership as an activist.  I felt emotional when I saw Hill, which felt strange to me, so I tried to dissect my feelings. This post is in honor of Anita Hill and the role she played in advancing women’s rights. Thank you, Professor Hill!  We stand on your shoulders.

In October 1991, Oklahoma Law Professor Anita Hill reluctantly testified before the Senate Judiciary Committee about her experiences working for Clarence Thomas when he was Commissioner of the EEOC. Hill said that when she worked for him, Thomas engaged in inappropriate sexual behavior in the workplace.  Specifically, Ms. Hill said that Mr. Thomas asked her out on several occasions and talked about his sexual exploits and pornography at work.

It’s important to note that Ms. Hill did not volunteer to testify against Thomas.  Instead, the Judiciary Committee subpoenaed her after leftist opposition groups gave them Hill’s name. At the time, it was said that Democrats were determined to find a way to block Thomas’ appointment.  And if highlighting Thomas’ inexperience didn’t work, they discerned that highlighting his sexual harassment of women might do the trick. Republicans, on the other hand, were eager to install Thomas.  They set out to discredit Hill by painting her as a liar and a woman scorned, who was desperate for the spotlight even if that meant destroying a “good man.”

The hearings were a spectacle and regardless of which side you were on, Hill’s humanity got lost in the mix.

Most Americans focused on the “he said, she said” factor of the hearings.  And at the time, polls showed that more Americans believed Thomas than Hill.

When Thomas referred to his hearing as a “high tech lynching,” Black people, in particular, became deeply distressed.  On the one hand, Thomas was right to point out that White folks have long used the sexuality of Black men to debase, criminalize, and invalidate them.  On the other hand, Black women have long been invisible victims of sexual assault because of awful stereotypes about our sexuality.  Who were we to support and believe?

Some of us were disappointed that a Black woman would “block” a Black man’s advancement to the nation’s highest court. Others of us insisted on supporting our sister.  And then, almost as an afterthought, there was the thorny problem of Thomas’ political views; they seemed awfully anti-black.

The fact of the matter is that, in our own attempt to wrestle with the pain and reality of American racism and discern the truth, we forgot Anita Hill’s pain.  It must have been an awful time for Ms. Hill.

You know the rest of the story.  In the end, Thomas won the battle.  He was seated on the Court and sits there silently today.

Hill lost.  For having the temerity to speak up about harassment, Hill received death threats for years. She largely suffered the consequences of telling her story, alone.

Her Impact on the Present

This is a sad chapter in American history but it’s not what made me teary eyed when I saw Ms. Hill last weekend.

I got weepy because Anita Hill is my superhero!

She couldn’t have known (or felt!) this at the time, but by testifying against Clarence Thomas, she paved the way for a sea change in the nation’s views on sexual harassment. Pre Anita Hill, Americans still occasionally joked about bosses chasing their secretaries around the office. Post Anita Hill, America took a closer look at itself and at how men and women were interacting in the workplace. Even if the U.S. Senate didn’t decide that Clarence Thomas talked about sex and porn at work, most of the nation agreed that unabated sexual banter in the workplace was unacceptable and likely illegal. Anita Hill’s testimony at Thomas’ confirmation hearings changed our hearts and minds.  According to History.org,

Women felt increasingly empowered to report the misconduct of high-profile men. Men like Thomas—and, later, President Bill Clinton—were now on notice that their sexual misconduct would no longer go unreported or overlooked. The once-obscure concept had now gone mainstream.”

In the decades since Ms. Hill’s testimony, more Black women have come forward to help others speak truth to power when it comes to sexual harassment and other forms of abuse.  For example, Tarana Burke, another Black woman superhero, brought us the #MeToo movement for women survivors of sexual abuse.  Burke’s work has also changed the world and made more women free.

In fact, times have changed a lot since 1991.  Powerful White and Black men, including media moguls, like Harvey Weinstein, Charlie Rose, Matt Lauer, and others all went down for sexual harassment.

I am not sure how much Black women have benefited from starting the #MeToo movement, but I do know that when it comes to telling the truth about sexual harassment, we have made the world better for everyone. And we owe a debt to Anita Hill for standing up first.

P.S.  I recently read that Anita Hill is heading up Hollywood’s commission on sexual harassment. What could be more appropriate? Sometimes you lose the battle but win the war.

On #BlackGirlMagic and Eating Pink Elephants: An Interview with Cheryl Grace

Check out these amazing Black women running for office in 2018!