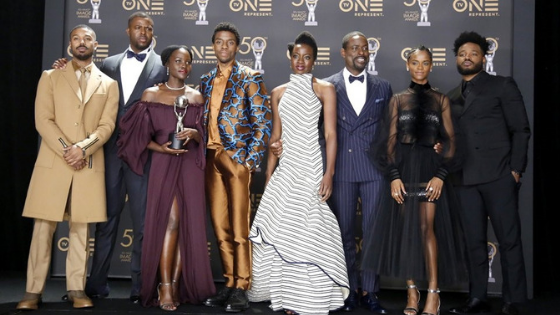 On March 30th, the NAACP held the 50th NAACP Image Awards. The award ceremony took place at the Dolby Theater in Los Angeles, which is the same place where the Oscars are held. For those who don’t know, the NAACP Image Awards is a ceremony to honor outstanding performances in film, television, music, and literature. Like the Oscars and the Grammys, the winners in over 40 categories are chosen by the organization’s members. Honorary awards, such as the President’s Award, the Chairman’s Award, the Entertainer of the Year, and the Hall of Fame Award, are also conferred.

The Image Awards is one of the occasions where the NAACP puts on a very big show! Members and leaders of the 110-year-old civil rights organization head to Hollywood, and everybody goes glam.  Women wear their best evening gown, while men don a tux.  This year’s show included NAACP leadership and Black media giants like Joy Reid, Donna Brazile, April Ryan, and Roland Martin.  In addition, Hollywood favorites like The Carters, Anthony Anderson, Tracee Ellis Ross, Viola Davis, Lupita Nyong’o, Michael B. Jordan and the entire cast of Black Panther, were in the house.  I was lucky enough to be in attendance too!

Why were the Image Awards created?

The NAACP Image Awards were created 50 years ago when some people “in the industry” got together at Sammy Davis’ house to talk about the need to elevate the best work by Black artists, particularly work that which did not perpetuate damaging stereotypes against us.

The issue was real. Through the 1950s and much of the 1960s, Blacks in the entertainment industry struggled to find work portraying Black people who weren’t maids, slaves, and minstrels. The most successful Black artists were folks like Lincoln Perry, who got a lot of work as Stepin Fetchit, the “laziest man in the world.” America loved it.  Mr. Perry/Fetchit was the first Black actor to earn a million dollars; his career lasted through the early 1950s. Similarly, the Amos and Andy show with its “yassah bosses”, Kingfish and Sapphire were on the air in syndication until 1966.

It was all too much. Everyone could see that the entertainment industry was helping to advance damaging stereotypes about Black people to keep the world “entertained.” In 1968, Davis and other Black actors and activists decided to take affirmative action to change the narrative.  They decided to develop an award for artists of color who were representing Blacks in realistic and non-stereotypical performances. Also, because the majority generally ignored our work as artists across the board during award season, artists outside of the performing arts were also recognized.  The Image Awards were created!

The short answer is, yes!  We still struggle with racial and other forms of stereotyping in the entertainment business.  Also, perhaps more significantly, people of color still aren’t recognized for outstanding, affirming performances at many major award shows. Remember #OscarsSoWhite.  All artists deserve recognition for their work.

The big winners at this year’s Awards show are below.  Go here to check out the full list!

All hail the Carters!

When the Carters are in the house, it’s hard to believe that we ever were (or are) minstrels for the entertainment industry.  When Jay and Bey arrived, the crowd including the celebrities rose, cheered and strained to get a better look.  If felt like we were part of the King and Queen’s court.

The 2019 NAACP Image Awards were magical!  I’m glad that they are still around to celebrate our genius and remind us that we are royalty.