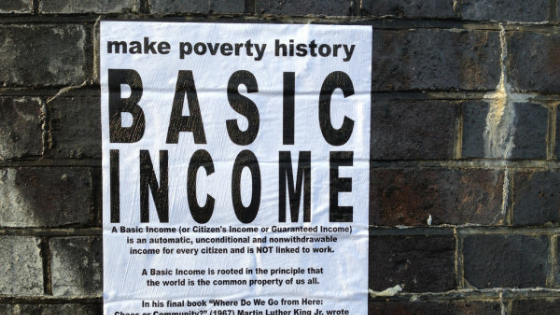 Millions of Black women are treading water economically.  The rising costs of housing, healthcare, and childcare coupled with student loan debt and stagnant wages, make it difficult for us to stay afloat. We need more money to successfully navigate our lives.

Unfortunately, Black women only earn $0.63 to the dollar compared to white men, have the most outstanding student debt after college graduation, and the lowest measurable wealth of any group in the country. The Black Futures Lab recently conducted the Black Census and found that 90% of respondents view “wages too low to sustain a family” as one of the most pressing problems facing Black communities. Raising the minimum wage is a popular strategy for boosting household incomes that is endorsed by several Democratic presidential candidates, but some progressives are calling for a guaranteed income (despite employment status) that provides a foundation upon which earned income can be layered to strengthen economic security.

Universal Basic Income (UBI) is one such policy focused on ensuring that all citizens have enough income to meet their basic needs.  Characteristics of a ‘full’ universal basic income include: unconditional use of funds, no means-test, covers basic living expenses, long-term, and distributed to everyone within a set area (locally, regionally, or nationally).  This differs from existing social welfare programs –like TANF, SNAP, and unemployment –that are means-tested, offer conditional support over a specific period of time, and have work requirements.

The Alaska Permanent Fund (a state-owned investment fund) is the only statewide UBI program in the US and has been providing annual oil dividends to each Alaska resident since 1982.  By studying the Alaska Permanent Fund, and other similar cash transfer programs, the Roosevelt Institute found that UBI would likely grow the economy and provide other quality of life benefits.  Their research reveals that, contrary to popular conservative discourse, a UBI does not discourage work.  It actually improves mental and physical health, increases educational attainment, and reduces criminal activity among recipients.

Long-shot democratic presidential candidate Andrew Yang is campaigning on a Universal Basic Income (UBI) strategy he’s calling ‘the Freedom Dividend’ that would provide unconditional monthly cash transfers of $1,000 for every adult in the country. However, under his proposal, individuals must choose between the dividend and all other public benefits programs. Hillary Clinton considered proposing a UBI strategy during her 2016 presidential campaign based on the Alaska Permanent Fund, aptly called “Alaska for America”. The proposal is described in her recent book What Happened, but she says she couldn’t make the numbers work to provide a meaningful dividend.

Aisha Nyandoro, CEO of Springboard to Opportunities, has been testing guaranteed income for Black women.  She told BlackHer,

She makes an important distinction between universal (as in Yang’s proposal to give everyone, regardless of economic position, $1,000 per month) and providing guaranteed income through targeted cash transfers that impact the most vulnerable.

When Nyandoro and her team facilitated focus groups and interviews with women in Springboard’s affordable housing communities in Jackson, Mississippi, the number one issue residents raised was a lack of cash. In response, Nyandoro decided to give people what they were asking for—unconditional cash transfers. Springboard created the Magnolia Mothers Trust as a pilot to provide twenty Black mothers with $1,000 per month for one year as guaranteed income to supplement their existing income (which was about $11,000 annually).

The pilot has realized many early successes; recipients have been able to pay down debt, complete community college, and put plans in place to increase their income now and in the future. Nyandoro hopes that they can raise funds to implement a 3-year study to assess policy changes needed and help re-write social policies so that they are inclusive of and impactful to folks who need them most.

Other proposals are on the table. Sen. Kamala Harris (D-CA) proposed the LIFT Act, which is an annual refundable tax credit of $3,000 – $6,000 (similar to the Earned Income Tax Credit).  It is based on earned income that can be dispersed monthly or annually at tax time to support families earning up to $100,000 annually, and individuals earning up to $50,000 annually. Representative Rashida Tlaib (D-MI) is proposing the LIFT+ Act, which mirrors Harris’ proposal with one major distinction – it’s not dependent on earned income. Under Tlaib’s plan, individuals who earn $0 are still eligible to receive the credit, which means a guaranteed income of $3,000. This is a meaningful ideological shift because all current social welfare programs are tied to work.

Universal basic income and guaranteed income proposals, like Yang’s, often intend to replace existing social welfare programs (e.g., TANF, SNAP, unemployment), which could have unintended consequences. While these strategies may help give everyone a minimum standard of living, they are not a silver bullet for economic security and do not guarantee that the most disenfranchised—including Black women—will benefit equitably.

As we prepare for the 2020 elections, we must ensure that the policies put forth will establish a solid foundation upon which Black women, our families, and our communities can thrive. That means ensuring that UBI and guaranteed income strategies provide a significant benefit to marginalized groups.  It also means combining guaranteed income with other progressive policies like raising the minimum wage, affordable healthcare, and housing, paid family leave, and debt-free college.