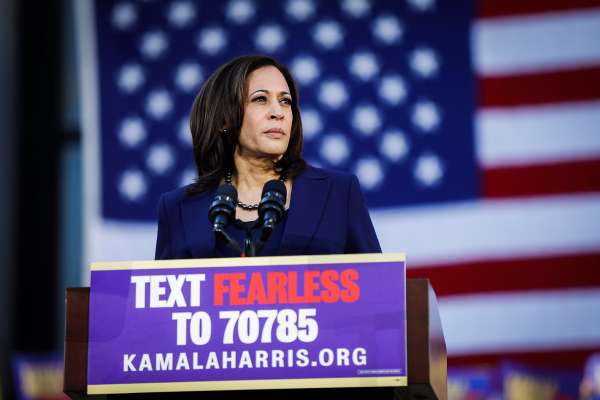 On Tuesday, October 15, Democratic candidates for president take to the stage in Ohio for another debate. Recent polls have Vice-President Joe Biden in the lead among Democratic voters, with Sen. Elizabeth Warren at a close second and Sen. Bernie Sanders in third place. Sen. Kamala Harris and Pete Buttigieg are tied for fourth and fifth place.

Harris entered the race in January and received plenty of enthusiasm from Black women. It’s about time for a Black woman to be president and many of us think Harris can get the job done. In the 5th annual Power of the Sister Vote survey conducted by the Black Women’s Roundtable, when participants were asked who they would vote for if the election were held today, Harris came in 2nd place with Black women voters ages 18-34 and 35-50.

However, this excitement hasn’t seemed to translate into momentum on the campaign trail. In June, she had a terrific performance at the first debate where she skillfully took on Biden on his past opposition to school bussing. This resulted in a boost in the polls and Harris raised $2 million in the 24 hours after the debate.

The second debate wasn’t nearly as memorable for Harris. She did a poor job explaining her position on health care, got tripped up when confronted by Biden on it, and got into a testy exchange with Rep. Tulsi Gabbard about her record as a prosecutor. Her support dropped nearly 12 points from June to August and now she’s holding steady at 5%.  But clearly, this is not enough to win the early primary states or earn Harris the Democratic nomination.

So, what’s going on? Can Harris make a comeback in Tuesday night’s debate?

Some recent, much-needed changes, may give her a boost. At the beginning of the month, plans to restructure her campaign were announced—with her current chief of staff and a senior advisor taking over the day-to-day management of the campaign. Inside sources claim that the campaign had too many bureaucratic hurdles and that the roles were unclear between Harris’ campaign manager, Juan Rodriguez, and her sister and campaign chairwoman, Maya Harris.

Harris has an incredibly talented team working for her. And she’s a compelling candidate. Even if you don’t like her, you have to admire how she so effortlessly handles her business as a member of the Senate Judiciary Committee. She can craft an argument well and skillfully debate policy.

On the other hand, Harris just lost a key endorsement this past week when Sen. Dianne Feinstein of California announced that her support for Biden’s candidacy. Feinstein is the senior senator from California and is also a former mayor of San Francisco, where Harris served as district attorney. Endorsements don’t always translate to votes and it’s so early in the race that it’s not clear why Feinstein decided to endorse now anyway. But it is a blow to the campaign that a fellow senator from California choose not to endorse her, especially because Harris is so popular in the state.

The other thing happening is a bizarre and ridiculous story being floated by two right-wing operatives claiming Harris had an affair with a 26-year-old personal trainer whom she also paid for sexual favors. To be clear, we shouldn’t take this seriously. There’s no proof and even if there were, who cares? After all, the current resident of the White House has had multiple extramarital affairs and his supporters aren’t bothered by it one bit. And whether or not a president is faithful to their partner or spouse is absolutely none of our business. These are stories created by the worse kind of trolls, who have also spread similar conspiracies about Warren and Buttigieg. But they can’t be completely ignored either.

This kind of smear tactic indicates that the Right is invested in spreading disinformation and to disrupt the democratic process. And we know that they are getting help from Russia to do it. So, I wouldn’t be surprised if they keep targeting Harris for the duration of the campaign, solely for the purpose of discrediting her and sowing further discord and division.

All of these things don’t play well in Harris’ favor. But political races are constantly evolving and unpredictable. If we’ve learned something from 2016, it’s that anything can happen. A good performance in Tuesday night’s debate might turn things around for Harris for good.

What do you think? Can Kamala make a comeback? Or is it too late? We’d love to hear from you.