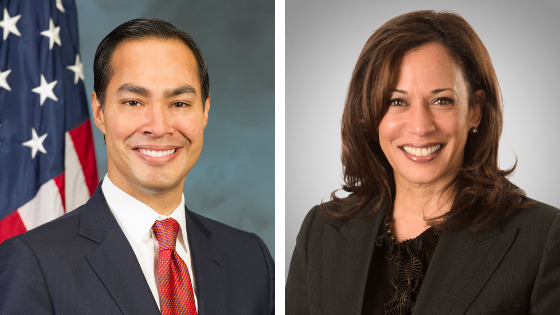 This past week, 20 of the 24 Democratic candidates for president took to a stage in Miami to debate their ideas in front of the American people. Over the course of two nights, they answered questions about policy, traded jabs and made the case for why Donald Trump is unfit for office and should not be given a second term.

Because there are so many candidates in this race, most of them failed to stand out. But there were some surprises and highlights that we should be talking about. Here’s my take on winners and losers from the debates:

On night one, former Secretary of Housing and Urban Development Julián Castro had the most significant breakthrough performance.

Angela says that Senator Elizabeth Warren won the debate. I disagree. To be clear, Warren had a stellar performance. Going into the debate, it was hers to lose. She’s jumped in the polls from 4.3% support in January to 12.8% in June. Among liberal and very liberal voters, she is polling between 14-21%. On debate night, Warren was prepared and demonstrated that she has thought out plans for addressing major policy issues.

In other words, nothing about her performance was a surprise. She is super smart and consistently a progressive on issues ranging from taxes, student loans, health care, and maternal mortality. We saw that same energy from her on the stage Wednesday night.

Castro’s presence, however, was unexpected. He’s struggled to break through the crowd since announcing his candidacy. But he shined on stage. He was the only candidate to mention the rights of trans people when it comes to reproductive justice. He also skillfully managed to go all in on former Congressman Beto O’Rourke. Castro repeatedly pressed O’Rourke on immigration, saying his ideas don’t go far enough and would criminalize undocumented families like the Trump administration has. O’Rourke went into the debate as the golden boy of many progressives. But he came out looking flustered and unprepared, thanks to Castro. Castro’s performance also gave him a boost among likely Democratic voters. Before the debate, 23.9% of likely Democratic voters had a favorable opinion of him. After the debate, that number went up to 47.4%.

Bill de Blasio had a majorly awkward moment when he invoked his Black son when asked about the issue of racial bias in policing. To be fair, it wasn’t out of context. De Blasio mentioned raising a Black son in America and having talks with him about protecting himself because of police violence against Black folks. This isn’t new to Black women, who often worry about our sons, daughters, family members and ourselves being the targets of police brutality. But this didn’t feel like a moment of solidarity—especially because there was a Black man on stage (Senator Cory Booker) who could have spoken to this as part of his daily life. Black Twitter quickly jumped on this and the GIFs that ensued were hilarious.

The most important moment of both nights was Senator Kamala Harris’s back and forth with Vice President Joe Biden on race and civil rights. Admittedly, Harris is a controversial candidate for some Black folks who think her record as a former prosecutor has done harm to Black people and families. But, Harris put her legal prowess to work in a dizzying exchange that forced Biden to cut himself off. If you haven’t watched it yet, you can watch here. Better yet, read the full transcript here.

Angela points out that Harris said she doesn’t think Biden’s a racist. Personally, I don’t think it’s useful for us to think of Biden in terms of “racist” or “not racist.” A person doesn’t have to consciously do racist things to unconsciously participate in racism and white supremacy. Biden was opposed to the federal government having a role in school busing back in the 1970s. Segregationists also held this position. Biden was not a segregationist. But he has yet to make the case for how being anti-busing wasn’t a harmful position. Instead, he keeps doubling down, saying that no one has done more for civil rights than him. He also recently went on the campaign trail bragging about working with segregationists. This is a big mistake. And it’s bad faith politics. He can’t use his proximity to the first Black president as a way to appeal to Black voters while simultaneously assuring white people that he can work with and understand racists. He has to pick a side.

Harris knows this. She’s fighting for votes too while also trying to allay fears about her record as a prosecutor. So this part of her debate strategy was brilliant. She left Biden, the frontrunner of the race, stammering and silent. She also managed to raise $2 million in the 24 hours after the debate. Biden may still be the frontrunner, but Harris has put a major dent in his candidacy. She’s also proving herself as the only candidate tough enough to take on Donald Trump. You don’t have to love or even like her to feel giddy about how she commands the stage and unapologetically takes on powerful men.

There are almost 500 days until Election Day 2020 and this is going to be a very long election cycle. The debates are our first step in finding a Democrat who can get us out of the mess we are in. This first round proves that things are just starting to heat up and it’s about to get good. I hope you all are watching!