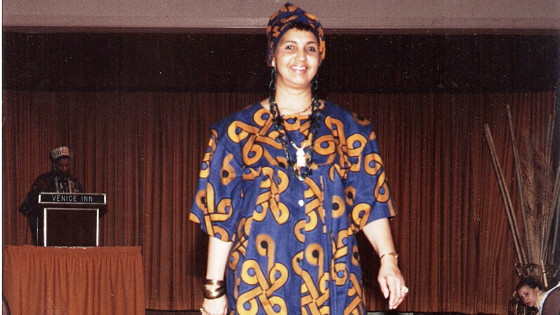 Amid the Black Power movement of the 1960s and 1970s,  the African American holiday of Kwanzaa emerged. Celebrated adjacent to Christmas, beginning December 26th and lasting for seven days, the holiday is meant to inspire unity, embrace African traditions in African American culture, and allow folks to reflect on the achievements of the past year (click here to revisit Angela’s primer on Kwanzaa).

Kwanzaa became very popular in the 1980s, which is when my grandmother, Gloria Campher, first learned of—and took an interest in—the holiday. She appreciated the thoughtful reflections on the seven principles of Kwanzaa along with its shared meals and communal elements. Recognizing the need for Black people to have a connection to our heritage and to receive positive messages that affirm us, she thought that young children could especially benefit from the holiday.

With that in mind, she spoke with her pastor and encouraged him to set aside time to share Kwanzaa with the parish. Several other parishioners got involved in support of the holiday. Before long, the school system recruited my grandmother to teach Kwanzaa to students. I remember being in elementary school and seeing my grandmother adorned in African-inspired prints and headwraps, sharing the principles of Kwanzaa with the children in my classroom.

Kwanzaa seemed to transcend racial lines because its messages focused on achievements, not deficits. My grandmother found that talking about Kwanzaa opened the door to discussions about our nation’s racist history. In a small predominantly white town of fewer than 40,000 people, encouraging these conversations was crucial especially given that the school curriculum mostly ignored discussions of racism in America.

At the time, Kwanzaa even garnered the attention of local news stations that sent journalists to take pictures at school events. However, my grandmother sensed that a big part of the reason for their presence was that they “wanted to feel good, like they were really giving us something.” They wanted it to seem as though doors had been opened for Black people, to demonstrate Black progress in the post-civil rights era. But while some advancements have been made, we are far from a post-racial America.

Today, the popularity of Kwanzaa seems to have waned. Some have said that the digital era may have contributed to this, because we now have easy access to Black history and heritage. Others dismiss the holiday as being “made up,” but many holidays are artificial—especially those that were created to support the greeting card industry and to encourage people to spend money.

Sadly, my grandmother’s enthusiasm for the holiday also lessened over time. She noted that the timing (during the Christmas and Hanukkah season) coupled with the labor (you must serve certain foods and use certain materials) is too much to do alone.

“It’s worth the time, but you need a group of people to be involved.”

When I asked her about the holiday, she offered me all of her old Kwanzaa supplies and books and seemed really excited that I was interested in learning more. I think she still sees value in the holiday and wants someone to do it. She’s looking to my generation to carry the torch.

While many holidays are flawed, we still enjoy and find meaning in them. Why not support a holiday that celebrates our shared history and common bonds, and promotes community, reflection, and affirmation? As we approach the closing of another decade, let’s reflect on what we celebrate and why.

So, who’s celebrating Kwanzaa this year?