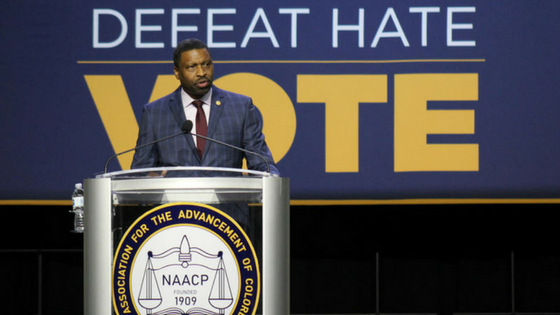 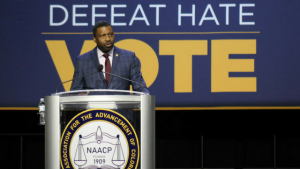 Last week as Donald Trump held a summit with Vladimir Putin, several thousand members of the NAACP got together for a summit of our own!

Like most conferences, the NAACP’s annual gathering is all about engaging and inspiring members, making connections with each other, and sharing ideas and inspiration to improve the lives of Black women, men, and children.

I must say that the male speakers at the convention did very well.  I was also truly inspired by the Women in the NAACP (WIN).  They were mind-blowing.  Here are 6 things that I learned.

1. Voting is Political and Patriotic

Everyone says that voting is a political act, and it’s true. The former governor of Massachusetts, Deval Patrick, who spoke at the convention, reminded us that voting is also an essential form of patriotism.  He said that voting is crucial to maintaining a strong democracy, especially these days when voting restrictions and gerrymandered districts are on the rise.  In a true democracy, we should welcome as many voters as possible. I agree!

“Patriotism demands we act because democracy is at risk. We must make it easier to vote, not harder – and root out insidious voter suppression tactics.”

2. We Get the Government that we Deserve

It was all fun and three-dimensional chess when President Obama was in office. Black people were ecstatic on Inauguration Day in 2009.  We were so hopeful that the U.S. was FINALLY moving away from its racist past. Many folks in the U.S. even took credit for having created a post-racial society.

Governor Deval said that now that we all realize that this was wishful (delusional?) thinking, we feel bad about the U.S. and don’t talk post-racial anymore.  That said, we are where we are and we have to “own the mess” that we are in. According to Deval:

“…we made this.  Republicans are making a righteous mess of their moment of absolute unchecked power, but we made this… All the voters who stay at home in every election from either party or no party. Because the truth is, in a democracy, as harsh as it sounds, we get the government we deserve.”

I am not as smart as Deval Patrick, so I am not sure that I can get my arms around being responsible for the mess.  But I am inspired to help clean up.

Maybe that’s his point.  We can all defeat hate by Voting, Volunteering, and GiVVVVing in every election!  Our Black Woman’s Guide to the 2018 Midterms can help!

President Bill Clinton did us a solid by attending the convention, so I have to give him props. According to Bill, being a leader means remembering our common humanity.  He said that this is especially important at a time when voting rights, family security, the best interests of children, and the bonds with our oldest allies are strained.

I agree.  If we don’t reflect on our common humanity, we may soon forget why we’re together.

4. A Little Child Shall Lead Us

After a student at her local Alabama high school was shot and killed, and after the horrific shooting at Stoneman Douglas High School left 17 dead, eleven-year-old student activist Naomi Wadler got involved in the March for Life movement. She led a student walkout at her elementary school and started marching, organizing, and speaking against gun violence. Go Naomi!

You’ve seen her on TV. Naomi became known nationwide after she spoke at the March for Our Lives rally in Washington, D.C. earlier this year.

Naomi asked us, the WIN, to help her and other students stop gun violence in our schools and streets because she doesn’t want to be killed in a classroom or see more kids murdered on school grounds. She also spoke for black women and girls who are so often the invisible victims of gun violence.

Naomi was speaking to the right audience and we gave her a standing ovation.  Black women want excellent, safe schools and streets for our children and every other young person in America.

5. Grown Black Women (Like Us!) Will Also Show the Way

Janice L. Mathis, Esq., executive director of the National Council of Negro Women (NCNW) also gave us words to live and fight by.  She assured us that she can see the light at the end of the tunnel because Black women care so much about making our communities and country better.

Black women and men will proudly and loudly stand up for the rule of law and democracy in the U.S.  This nation is not going down on our watch!  Per Ms. Mathis, Black women know how to make a way out of “no way”, and we will vote in record numbers in the 2018 midterms.  This will be another step toward righting the ship in these troubled waters.

6. We May Have Lost the Battle, But We Can Still Win the War

Every speaker at the convention urged attendees to not give up the fight, even in the face of enormous obstacles. As the nation’s oldest civil rights organization, the NAACP knows how to fight.  They’ve learned this lesson well!

On Seeding a Generation With Wealth: An Interview with Anne Price

Follow the 3 V’s: Vote, Volunteer and GiVVVe this election season!