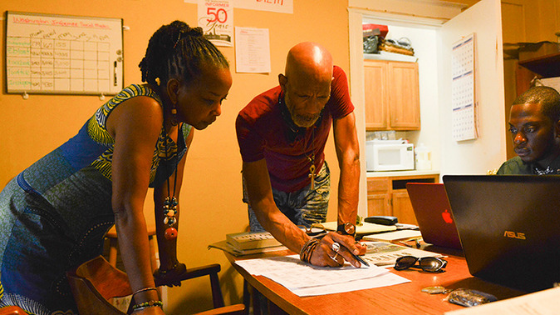 In 1994, when Calvin Rolark handed over the reins of The Washington Informer, Washington, D.C.’s African-American newspaper, to his daughter Denise, he created a legacy that would have meaning well beyond his immediate family. Denise joined the ranks of a select few women news publishers – a cohort that from then to now has barely increased.

Denise Rolark Barnes still publishes the weekly newspaper founded by her father. The Informer reports on Washington’s Black community – in all of its fullness. That means it reflects the community’s economic and social diversity, the concerns of its business citizens, and its aspirational aims. It is referred to as the “good newspaper,” because it is so different from the typical ambulance-chasing city paper or broadcast news station that most American consumers are accustomed to.

Denise worked in the family business every summer growing up. She was being groomed. But she didn’t foresee that she would one day run the paper.

“I grew up with the paper,” said Denise. “While my peers worked at the movie theatre or the soda shop, I worked at the paper. I typed address labels for subscribers, answered phones, and took the deposits to the bank. Still, I didn’t think it was going to be my life’s work. But when the time came, I was the one.”

The Informer is part of the national network of papers referred to as the “Black press.” The Black press came into being when Freedom’s Journal was first published in New York City in 1827.

Until the Internet gave us the ability to connect directly to other people across great distances, gatekeepers had a tight grip on the channels of mass media  – TV, radio, newspapers. A handful of white men and almost no women decided what was “news,” and their biases were reflected in how minority populations were depicted in the media.

The Black press operated in the gap. It has had at the heart of its mission two main things: 1) to connect Black people to each other, and 2) to shape the narrative about black life in America, in other words, to frame our issues as we see them, and to define ourselves.

The Black press today comes together as the National Newspaper Publishers Association or NNPA. Though some criticize the Black narrative as cultivating an oppositional identity, most Black people view the narrative as a necessary defense against the efforts of others to define us.

Over the years, the narrative about Black people in the so-called mainstream press has sometimes run close to “fake news.” Kimberly Fain quotes Carl M. Messer in the JSTOR Daily story about the Tulsa, Oklahoma riots of 1921, in which one of the most affluent black communities in the U.S. at the time was burned to the ground.

Perhaps as a result of government officials’ stereotyping rhetoric and the media’s biased reporting, whites and blacks interpreted the racial violence differently. Generally, white politicians and residents perceived the black community “as predisposed to crime and in need of social control.”

Denise Rolark Barnes points to the legendary news publisher Ida B. Wells for her inspiration.

Wells was a fierce warrior for civil rights. She started the Memphis (Tennessee) Free Speech in the late 1880’s to rail against the treatment of Blacks, particularly the disgusting but increasingly common practice of lynching.

Wells pioneered a style of investigative journalism that is still used today. She published the Free Press until they ran her out of Memphis in 1892. This achieved little more than to elevate her to the national stage, where she persisted through many subsequent efforts to shut down her loud, militant voice.

There have been a handful of other Black women running news organizations, but many have been forgotten.

Mary Ann Shadd Cary was an American who fled to Canada and in 1853 published from there the anti-slavery newspaper Provincial Freeman. She is believed to have been the first African American woman news publisher in North America, predating Ida B. Wells by nearly 40 years. Josephine St. Pierre Ruffin published Women’s Era from 1890-1897, the first paper by and for Black women. Ruffin is also known as a political activist who used women’s social clubs to advance the cause of women and the race.

Denise, a past chair and a current member of the NNPA board of directors, thinks that as we move forward more women will become publishers. And she is obviously a devoted member of the Black press and believes firmly in its role.

“There’s a role we – both women and Blacks – play in shaping the conversation. The people in our community depend on us, the Black press, to keep those authentic narratives alive,” said Rolark.

In this new American era, with a person seated at the top of the U.S. government who questions not just the veracity of the press, but the necessity for it, it’s all the more important that we support the media that strives to “speak truth to power,” and hold the powerful accountable. There are important reasons we consider the media to be the Fourth Estate.

Black Americans can appreciate the role the news media has played in our march to full citizenship. Even in some of the most adverse times for Black folk, media coverage of social issues and government corruption has helped swing the pendulum toward change.  And with Blacks – more and more of them women – stepping into public life in unprecedented numbers, we need trusted sources to cover these new leaders and bear honest witness to the movements they are starting and advancing.

Today, it is critical to know the sources of our information. “Fake news” is indeed everywhere. And by now, “I read it on the Internet” just doesn’t cut it as sourcing. While highly imperfect, media reporting is often as close as we ever get to the truth of things.

We have to support the Black press, and the other trusted sources that have informed and connected us and our movements since the beginning. (How else would we know what the Congressional Black Caucus is doing, for example).

It is up to us to make sure these news outlets, and the legacy of Ida B. Wells and Denise Rolark Barnes, stay alive.

On Ending Child Poverty: An Interview with Naomi Post