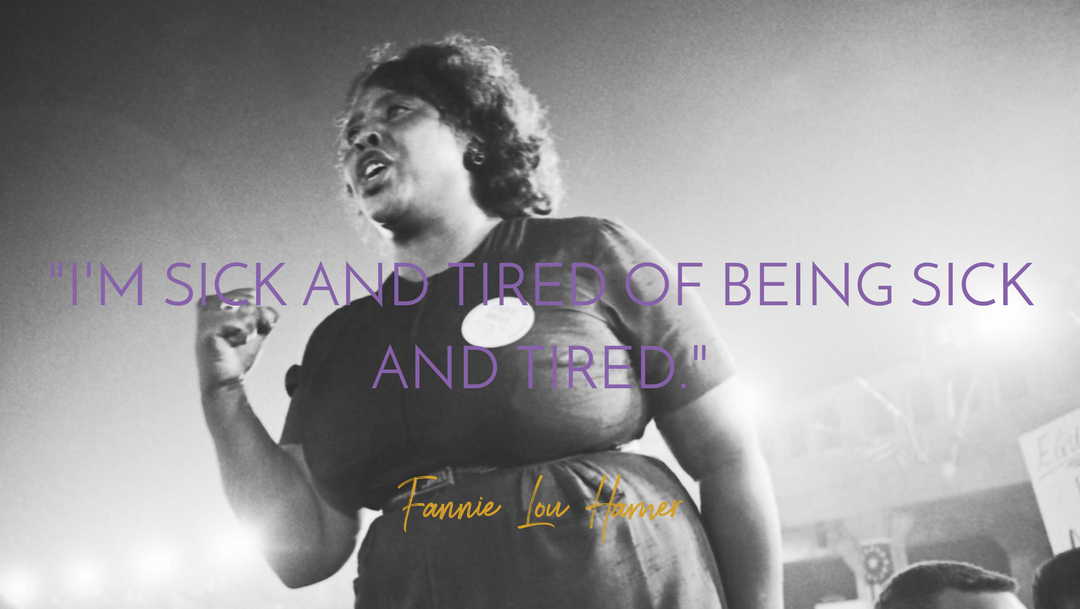 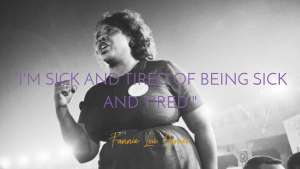 Ever since I read about her in the 1990’s, I have been a fan of Fannie Lou Hamer. Until she joined the Civil Rights Movement in the 1960s, Fannie Lou Hamer was an ordinary black woman living a difficult life in rural Mississippi. Her birthright, as a poor, black, female Mississippian was an unfulfilling life of humiliation, pain and near indentured servitude as a sharecropper. Hamer fought all of this when she took up the mantle of activism.

“Fannie Lou Hamer was born on October 6, 1917, in rural Montgomery County Mississippi.  She was the twentieth child of Jim and Lou Ella Townsend. The family moved to Sunflower County when Fannie Lou was two years old, and she began working in the cotton fields at age six. Sharecroppers, her parents finally earned enough to rent land and buy mules and a car. However, the family was plunged back into poverty when a white neighbor poisoned the mules because he did not want to see the Townsend’s succeed.

In 1944, the owner of the plantation on which the Townsend’s worked discovered that Fannie Lou could read and write, and employed her as the time and record keeper. A year later, she married a tractor driver on the plantation named Perry Hamer. The Hamers made their home in Ruleville, and Fannie Lou spent the next eighteen years as a sharecropper and plantation record keeper.

When the Civil Rights Movement came to Ruleville in 1962, Fannie Lou Hamer quickly became an active participant. With training and encouragement from the Student Nonviolent Coordinating Committee (SNCC), Hamer and several other local residents attempted to register to vote but were unsuccessful because they did not pass the infamous literacy tests. In retaliation for trying to register, Hamer was fired from her job, received phone threats, and was nearly a victim of gunshots fired into a friend’s home. But Hamer was not intimidated: by 1963 she was a field secretary for SNCC and after many efforts to do so successfully registered to vote.”

During the fight for the right to vote, while seeing slow (but steady) progress, Fannie Lou Hamer famously said that she was “sick and tired of being sick and tired.”  It was a reference to her dismay at having to fight to the death for rights that were fundamental to Whites and other Americans but denied to Blacks.

Hamer was tired of battling to get more out of her life, which was structurally designed to block her from any real opportunity. It was clear that some Mississippians believed that Hamer and other Black people were born for the sole purpose of working for White field owners at low, low wages. Fannie could see that her life and the lives of her friends and family would not change until Blacks stood up and fought for themselves. Neither she nor any other Black person in Mississippi would be “handed anything” – not even basic human decency.

The tiring and brutal fight was ultimately successful. In 1965, Congress passed the Voting Rights Act during the Johnson administration.

Today, I am older then Fannie Lou Hamer was when she took up the mantle of activism. Because of her and people like her, even though I am an African American woman, I have not (yet) had to demand my right to vote. Nor, have I experienced the violence of a police baton or the terror of racist shots being fired at me. For this, I am grateful.  As a Black woman, the fact that my life is not filled with violence is a historical anomaly. Still, there are many days when I wake up so sick and tired that I don’t want to get out of bed. I fear that the day ahead will be filled with nonsense – policies designed to divide us and practices that cause so much pain.

I have a hundred examples. I’ll mention just a few.

Fifty years after Fannie Lou Hamer fought for her humanity and ours, I too am sick and tired of being sick and tired. Maybe you are too.

“Work with your sisters to change the day.“

The fight for decency and fairness is not over.  Sometimes it feels like we’re all just getting ready for Round 3 and have to figure out what tools – words, moral authority, protest, political power, economic power, all of the above – we will use to secure our rights and set each other free.

I know, as you do too, that throwing the covers over our heads won’t change a thing. Reasonable people have to come together to bring the country that we love to its senses.  We have to stand shoulder to shoulder in the face of unreasonable people who are determined to dominate everything.

We, dear readers, are those fighters. We are the reasonable people. I have put my faith in Black women – like us – we can make the difference.  We can read the handwriting on the wall when others say, “It’s blurry.” Like Fannie Lou Hamer, we are willing to fight to save our children’s lives.  We know when it’s necessary to come together to protect our interests and our American ideals of fairness, justice, and equality.  We also know when it is time to lead others through the valley of the shadow of death and into the light.

Even on the days when I am sick and tired as all get out, I tell myself to stay strong like Fannie. “Work with your sisters to change the day.“ Together, we can make it happen, whether it is through marches, letter-writing, supporting candidates, protesting bad “leaders,” or running for office.

Who do you turn to for inspiration in the face of today’s absurdity? Who inspires you to carry on?

Take That Little Girl’s Face in Your Hands. Tell Her of Her Greatness.

Career Growth as an Exercise in Courage: An Interview with Lisa Hall