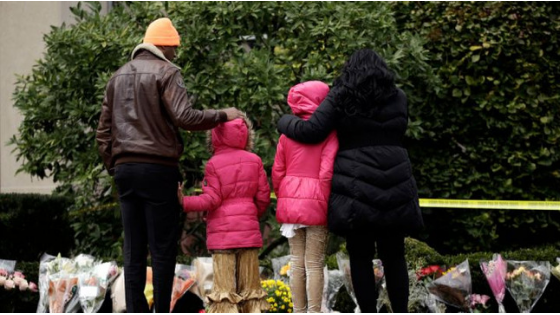 Tweet
Share22
Share
The weeks leading up to tomorrow’s election have been tough; they have been fraught with incidents of domestic terrorism. As reported by CNN:

“Wednesday [October 24th], a white man with a history of violence shot and killed two African-Americans, seemingly at random, at a Kentucky Kroger store following a failed attempt to barge into a Black church.

[That same week] [a]fter mail bombs were being sent to people who’d been criticized by the President, a suspect was arrested Friday — a man who had railed against Democrats and minorities with hate-filled messages online.

Those three incidents in 72 hours shared one thing: hate.”

And just this week, a man spouting hatred against women, shot two women in a yoga class in Tallahassee, Florida.

The pattern of violence has left a lot of us feeling angry, scared and even numb. Citizens of all creeds are asking how so much hate and evil can happen here in the United States, at this point in history.

While we are horrified by the violence and mourning the senseless loss of life, I think as Black women we are a little less shocked.  As Black women, we know that the U.S.’ stated principles of equality are true.

“We hold these truths to be self-evident, that all men are created equal, that they are endowed by their Creator with certain unalienable Rights, that among these are Life, Liberty and the pursuit of Happiness.”

That said, we also know that for most of our fellow citizens it has taken over 200 years to begin to believe that equality is innate and applies to EVERYONE.

In short, Black women have known for centuries that some of our fellow citizens are “haters”. They don’t believe in good; they believe in violence, and in hatred and killing people as a salve against their own despair, and potential loss of power.

As Black women, we sense that as bad as things are for other groups on the hate spectrum, they are worse – or will be soon – for us and ours. That’s just the way it is in America. Our common sense tells us that if we don’t pay attention, that the United States may grow even more dangerous as a nation.

So, what can we, as citizens, do to fight?

Most immediately, we can VOTE.  We can vote for change and we can vote to fight against the evil that’s invading us now and always.

We can vote to honor and remember those who sacrificed their lives during the civil rights movement and recently lost their lives to domestic terrorism.

We can speak out for what is right because we know our strength and cannot abide our country’s current path.

We can believe in ourselves and the power of everyday people to create momentous change.

This country belongs to all of us.  So many of us have fought long, hard and painful battles to claim our place as citizens.  As Black women, we can use the power of our voices to fight to the end, to keep what’s ours, and to show others the way to a more perfect union.