“I don’t need to find my voice. I never lost it.” – An Interview with Michele Jawando 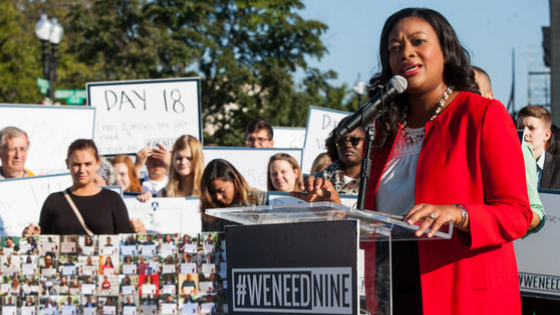 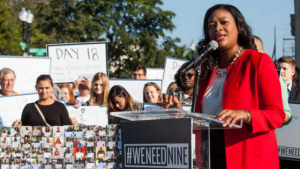 This week we were thrilled to catch up with Michele Jawando, head of progressive engagement at Google. Prior to joining Google, she served as vice president at Center for American Progress (CAP). Before that, she served as general counsel and senior advisor to Senator Kirsten Gillibrand (D- NY).  Jawando was responsible for leading some of the office’s landmark work, including the passage of the 9/11 health bill, the repeal of “Don’t ask, don’t tell,” and the confirmations of Supreme Court Justice Sonia Sotomayor and Justice Elena Kagan.

Jocelyn: It’s so good to be with you today.  You’ve had an amazing career and you’re just getting started!  Tell us about your path.

Michele: I come from a very political family.  In fact, my great aunt, Dame Lois Browne-Evans was the first Black woman lawyer in Bermuda.  In 1999, she was knighted by Queen Elizabeth II.

Michele: Our families were very close. In fact, as kids, we switched “families.”  My siblings and I, as well as my father, spent time living with my aunt and family there, and my cousins lived with my parents and grandparents here in the states.  We were and are very close.

At that time, in Bermuda, voting in elections was restricted to land-owners and there was massive discrimination in housing and education.  So, I grew up licking envelopes, passing out flyers to neighbors, and more. This is just what we did.

I grew up understanding that there is always something in your way.  It’s up to you to remove barriers.

I grew up around strong Black women who were avant-garde. They were leading these movements.  They were business owners. My mother is an AME minister.

Michele: That’s why I blanch when people say that Black women need to find their voices.  I don’t need to find my voice, I never lost it.

Michele: My father was a man ahead of his time.  I think we would say now that he broke traditional gender roles.  He took me to football games and turned me on to comics.

Jocelyn: How did you get to Google?

Michele: I did voting rights work out of law school.  I have always been interested in the intersection of policy, politics, and people.  It made sense to go to work on Capitol Hill. And I took an opportunity to join Kirsten Gillibrand’s team after she was first appointed to the Senate seat.

It’s funny because now people love Kirsten Gillibrand (as they should), but when I started working for her everyone had such low expectations and weren’t sure what she was about.

Michele: Actually, it was freeing. As a team, we had something to prove.  And it made us work harder. And Kirsten was so supportive. She was always so open to new ideas.  And when it came to work/life balance, she led the way.

I had my first 3 children while working in the office.  The Senator would support me taking the time I needed even as a member of her senior staff, including with paid leave and nursing. In fact, when I started in the office she asked me to redo the office manual to make sure all her employees had access to paid family leave before it was something others were paying attention to.

She is such a strong, competent woman.

People began to pay attention once we won permanent health care for the 9/11 responders and repealed “Don’t ask, don’t tell,” the policy that banned gays from serving openly in the military.

Jocelyn: Speaking of amazing Senators, did you see Senator Harris and Senator Booker at the Kavanaugh confirmations last week?

Michele: That’s where I got my life from last week.  Watching Cory Booker and Kamala Harris, I thought, when you have a seat at the table (on the Senate Judiciary Committee), this is how you use it.  You create systems, opportunities, and community so more people have access to power.

Michele: While I was working for Senator Gillibrand, I got a call from Center for American Progress (CAP).  I knew about their president, Neera Tanden – another amazing, strong leader.  And I joined them to do work on courts, justice, gender equality, and voting rights.

Like Google, Center for American Progress is a very innovative place.  If you have an idea, you go for it. My position allowed me to interface with various departments and work on diverse issues, including women’s equality, and criminal and racial justice reform.

I needed the complexity of CAP.

Michele: One of the worst days of my life was realizing as a staffer on the floor of the Senate that even after the horror of the Sandy Hook Elementary School shooting, we were not going to be able to pass gun violence prevention legislation.  In so many legislative battles, there is no in-between.

Jocelyn: Especially, in this current Congress.

Michele: It was an either-or and we lost.  It was devastating.

I started asking the question, “How do we win in other ways?  And, how do we win beyond DC?

The Center for American Progress is putting ideas into the world. That’s so rich.

Jocelyn: We found you because of your amazing scholarship at CAP.  Leveraging the Power of Black Women, the paper that you wrote with BlackHer Shero, Jocelyn Frye, is one of the first articles we shared on BlackHer.

Michele: Yes! At CAP, I also served as a spokesperson for media.  That was new for me and I was stretching and seeing a different part of myself.

Jocelyn: It sounds wonderful.  Why did you leave?

Michele: I got a call from a former Republican colleague who said, “I think you’d be perfect for this role at Google.”

This is an aside, but it reminded me that it’s important to be kind to everyone.  You never know when and where you might meet again.

Michele: To be honest, I had some trepidation.  It’s Google and I have spent my entire life in public service.  But I resonate with their values. The company is grounded by their values and they feel that that is getting lost in their story.

They hired me to be a validator for and to engage with the progressive community.

I said, “Yes!”  This is a great opportunity to work for a multi-national company making a powerful statement to the world.  For example, right now we are talking about the future of work in this country, and why Paid Family Leave is so important for our company. That sends such a powerful message, here and around the world.

Jocelyn: What should our readers know about Google?

Michele: We believe in the power of voices and stories. We want more people to have accessibility, information, and voice.

As Head of Progressive Engagement, I am part of the public policy team.  Part of my role is to be a better validator for more communities.

We’re also asking, “How do you get the most information to the most people?  We’re constantly asking what’s best for our users? We respect the opportunity to serve others.”

At its heart, Google is still a scrappy, engineering startup.  We want to do the most good.

Jocelyn: What keeps you up at night?

Michele: I have three girls and a baby on the way.

Michele: I think a lot about the world that I’m leaving for my children.  I affirm my daughters all the time because I want them to have a great sense of self-worth.  I want to be sure that they know that their beauty is not one-dimensional. We don’t know the sex of our baby, but if we do have a boy, I think a lot about what we will need to do to help him navigate the world.

Michele: I have so many!  My Aunt Lois, whom I mentioned above. My parents.  I also admire my baby sister. She’s studying to be an actor and director in Atlanta and she challenges me.

Cassandra Butts was a dear mentor to me.  She was involved in most of the professional decisions of my career.  She passed but I think of her often. She was such an important teacher to me.

Jocelyn: What’s one thing she taught you?

Michele: I don’t have to second guess myself.

My husband is also a great supporter.  He reminds me to negotiate and remember my value.  He says all the time, “You deserve more.”

Jocelyn: Let me ask you the Miracle Question. You go to sleep tonight and wake up in the morning and it’s September 2019.  The miracle has occurred for Black women.   What happened?

Michele: There is a Black woman serving on the Supreme Court or serving as President.  I’d take either.

Jocelyn: Short and sweet.  I love it. Amen!

On Getting Better Results by Doing Things Differently: An Interview with Christine Michel Carter

Getting to Know You: Your BlackHer Survey Results