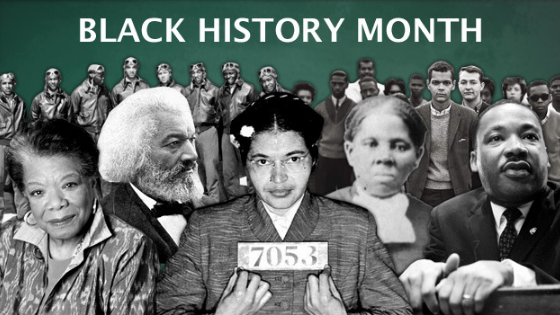 Black History Month is an annual celebration of achievements by African Americans and a time for recognizing the central role of blacks in U.S. history. It’s a month that I have come to love!

The month itself has an interesting and distinguished history and Black people made it happen.

“The story of Black History Month begins in 1915, half a century after the Thirteenth Amendment abolished slavery in the United States. That September, the Harvard-trained historian Carter G. Woodson and the prominent minister Jesse E. Moorland founded the Association for the Study of Negro Life and History (ASNLH), an organization dedicated to researching and promoting achievements by black Americans and other peoples of African descent.

Known today as the Association for the Study of African American Life and History (ASALH), the group sponsored a national Negro History week in 1926, choosing the second week of February to coincide with the birthdays of Abraham Lincoln and Frederick Douglass.   The event inspired schools and communities nationwide to organize local celebrations, establish history clubs and host performances and lectures.

In the decades that followed, mayors of cities across the country began issuing yearly proclamations recognizing Negro History Week. By the late 1960s, thanks in part to the civil rights movement and a growing awareness of black identity, Negro History Week had evolved into Black History Month on many college campuses.

President Gerald Ford officially recognized Black History Month in 1976, calling upon the public to “seize the opportunity to honor the too-often neglected accomplishments of black Americans in every area of endeavor throughout our history.”

I have followed President Ford’s advice.  For me, Black History Month provides an annual reminder to pause to celebrate and learn from our history in the United States. Part of my habit stems from my history.  When I was a child in the 1980s, my parents required me to watch the two or three documentaries that aired as “PBS Specials” during Black History Month about Dr. Martin Luther King, Jr. and the Civil Rights Movement to “show me where I came from.”  I was fascinated and terrified by what I saw. Well-dressed Black people sang, marched, and protested for their right to be treated as equals. In response, people were beaten, churches got bombed, little girls died, and MLK was assassinated. I learned that Black people had to fight and die for freedom fully 100 years after slavery was abolished! It was a lot for me to take in as a child.

With age comes wisdom.  As I grew older, I saw our history as a cause for celebration. I read about our 350-year history of slavery, domestic terrorism, and daily indignities and could not believe that Black people made it through life in the U.S. at all, let alone as fully intact human beings. I am always struck by our strength as people. We stayed alive and mostly stayed sane. We didn’t give up. To me, Black people who lived through slavery in the United States and the pre-civil rights era are some of history’s greatest warriors.

Now, February is a celebratory month for me because I am fed daily reminders that I, one lone black woman, am part of a great race of people who have been through hell and back in this country, and who have survived, thrived, and loved despite that. (Think of your family history.) We have also loved this country, and given it our best for the good of all despite our physical and/or psychological oppression. (Think of Jackie Robinson, Maya Angelou, or the Hidden Figures.)  Call me crazy, but this knowledge strengthens and inspires me. America is damn lucky to have Black people and should spend every month of the year celebrating us.

Since 1976, every Black History Month has had a specific theme provided by ASALH.  2019’s theme is Black Migrations. While this is an interesting topic, I must admit that this year I am ignoring it: in my world, 2019’s Black History Month theme is Black Women. 2018-2020 may well be our moment in time; it’s best to make the most of it. I am reading more works by and about Black women and our role in U.S. History. (By the way, Michelle Obama’s Becoming has historical significance!) I love and appreciate Black men and know about their seminal contributions to U.S. history, Black history, and my life, but I am consciously taking some time to focus on us, the ladies.

I encourage you to dive in as well. Make the most of Black History Month this year; it’s for you! We only get 28 days! Honor yourself and your history, and the Black people – alive and dead – whom you love.  Our history shows us that we have come a long way; the strength in our past and in those who lived through it makes me believe that a still more glorious future lies ahead.

P.S.  To get a daily dose of Black history, please check and subscribe to PushBlack, a nonprofit dedicated to raising up Black voices.  We love their work!

I Want To Raise My Children In A World Where People of Color Are Empowered To Vote: Here’s How We Get It Done!

On the Role of Identity in Creating Better Policy: An Interview with Leslie Herod