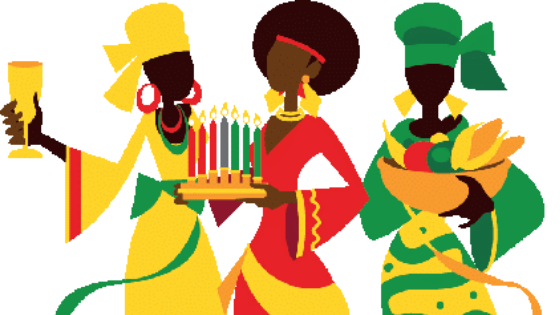 Christmas is coming and so is Kwanzaa on December 26th.  Here’s everything you always wanted to know about Kwanzaa but were afraid to ask!

I recently asked an African American friend of mine about his plans for the holiday season.  He does not have family in the area, so he usually spends Christmas with friends, at the movies, or enjoying a meal on his own.

My friend also confessed that Christmas doesn’t mean a lot to him.  He gets much more satisfaction and personal growth out of celebrating Kwanzaa.  “Kwanzaa gets a bad rap in my opinion,” my friend said.  “It was developed and got some play, but then in the 1970s Black people seemed to be afraid to be associated with anything African, for fear of being considered ‘less than’.  But it’s really an interesting holiday that’s about unity, empowerment, and self-reflection. I celebrate every day of it. You should look into it and think about celebrating it too.”

After talking to my friend, I recalled that my family celebrated Kwanzaa in the 1980s along with some other Black people in our (suburban) village.  It was a community affair that brought a lot of people to our house for a couple of days. And it left me with a good feeling about Kwanzaa.  That said, I can’t remember much about what Kwanzaa meant or why we celebrated it.  According to this Huffington Post piece on Black people and Kwanzaa, I’m not alone in that regard.  I became intrigued. I started researching Kwanzaa right away to understand that childhood memory.  Here’s what I found:

In the aftermath of the Watts riots in Los Angeles, Dr. Karenga searched for ways to bring African Americans together as a community. He founded a cultural organization and started to research African “first fruit” (harvest) celebrations.  Karenga combined aspects of several different harvest celebrations to form the basis of Kwanzaa.

The name Kwanzaa is derived from the phrase “matunda ya kwanza” which means “first fruits” in Swahili.  Each family celebrates Kwanzaa in its own way, but celebrations often include songs and dances, drums, storytelling, poetry reading, and a large traditional meal.

According to History.com, Kwanzaa is always celebrated for seven days. This year, Kwanzaa will be celebrated from December 26, 2018 – to January 1, 2019. Each night of Kwanzaa there is time for togetherness, if you are with others, and time for reflection.  Here’s how that works:

On each of the seven nights, the family gathers and a child lights one of the green, black or red candles (Mishumaa Saba) on the Kinara (candleholder).  Then, one of the seven principles is discussed. The principles, called the Nguzo Saba (seven principles in Swahili) are values of African culture which contribute to building and reinforcing community among African-Americans.

On December 26, the first night of Kwanzaa, the sole black candle which symbolizes Umoja (unity), the basis of success, is lit.  The black candle stands at the center of the Kinara or candle holder. Three red and three green candles, each symbolizing another Principle of Kwanzaa, are to the left and the right of the black center candle.

The seven principles or Nguzo Saba are a set of ideals created by Dr. Maulana Karenga. Each day of Kwanzaa emphasizes a different principle.

Kwanzaa also has seven basic symbols which represent values and concepts reflective of African culture. They are:

Each symbol also carries a specific, spiritual meaning. If you want to know more about the symbols, go here.

What Kwanzaa Can Mean to Us Today

As my friend said, “reflecting on the seven principles that Kwanzaa stands for can add meaning to your life and revitalize your commitment to living the principles.”

We are in a new age of unity, Black pride and reflection, which this holiday can help to boost. It seems especially useful to consider those principles on the eve of a New Year.

So Merry Christmas, Happy New Year, and Happy Kwanzaa to all!