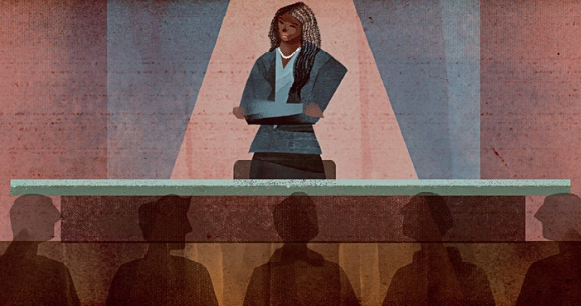 Presidential hopeful Senator Kamala Harris held one of the most important and influential roles in California’s criminal justice system when she was elected to serve as California’s attorney general from 2011 through 2016, and even before that when she served as San Francisco’s district attorney.  She led investigations, issued policies, and oversaw the state’s criminal justice system. For some Black people this translates to “she put Black people in jail,” and it’s a turn-off. They say they’ll never vote for her.

This may be a natural reaction to the word “prosecutor.” The U.S. criminal justice system is corrupt – especially as applied to Black people.  Since slavery and the Black Codes, the system has been used to oppress and imprison us.  Some prosecutors are also corrupt, making a bad system worse. (See e.g., Linda Fairstein’s corrupt prosecution of five Black children, aka the Central Park 5.) Many are, at the very least, prejudiced against Black people. The Stanford Criminal Justice Center says that prosecutors as a matter of course, seek harsher charges and longer prison sentences against Black people. Thus, there are plenty of Black people serving 10 plus years for holding a couple of joints, while rich white child molesters walk freely among us. Similarly, unarmed, innocent Black people are killed by police officers, who are never charged with a crime. All of this is maddening.

But Black folks need prosecutors too and Kamala and other Black prosecutors should not be viewed as enemies of our people.  There are people (including Black people) who commit crimes for which they should go to prison.  A Black family member of mine was recently shot at – with intent to kill – by a Black person. Do I want the attempted murderer and robber in jail?  You bet I do – and for a long time.  Being a prosecutor can be a form of public service to the Black community.

Reform leaders say that we need more Black prosecutors to be elected, appointed or hired if we want more justice for Black victims and criminal defendants and a fairer application of the law. After all, a criminal defendant’s fate lies in the hands of the prosecutor. They decide whether to pursue a criminal case or not, whether a crime will be charged as a misdemeanor or a felony, and sometimes whether prison time will be served.

More citizens are voting for and embracing Black prosecutors, possibly because they want fairer representation. In St. Louis County Wesley Bell was elected as the county’s first Black prosecutor following Michael Brown’s killing, and 27-year county prosecutor Robert McCullough’s failure to indict the police officer who killed him.  McCullough was also known for his policy of holding people with misdemeanor offenses who could not post cash bail. Bell beat McCullough soundly in the Democratic primary.  Another recently elected Black prosecutor is Letitia (Tish) James, who is New York State’s newest Attorney General.  She’s using her power to investigate misdeeds of the Trump Foundation.

What about Senator Kamala Harris?  How did she treat Black people during her time as AG? I don’t have any stunning insights. She was a tough prosecutor, and she and her office put people in jail. She also promoted some progressive policies in California, but she skews more “moderate reformer” than progressive.  Among other things, she:

At the same time, Harris made what many see as major mistakes.  While she favors legalizing marijuana today, when she served as California’s AG, over 1,000 people were incarcerated on marijuana charges. And she has not been a significant proponent of other major reforms to the criminal justice system.

I don’t know yet if Senator Harris is “my candidate” but I’m not going to let her prosecutorial record alone determine my vote.  I want to learn more about her history and her current policy proposals, and whether they will help people like me, my family, and friends.  That’s the American way.