On Advancing an Economic Agenda that Works for All Black Women: An Interview with Kercena Dozier 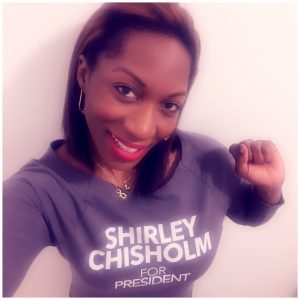 Building our personal, economic, and political power by getting educated and organized, that’s what we’re all about at BlackHer!

This week we were thrilled to catch up with Kercena A. Dozier, Chief of Staff for New York State Senator, Brian A. Benjamin.

Me: Kercena it’s wonderful to meet you via phone.  I’ve been following you on Instagram. I love your short videos about why we need to get politically engaged.  And I love your political t-shirts!

Me: What is your day job?

Kercena: For the past year, I’ve had the honor of serving as chief of staff for New York State Senator, Brian A. Benjamin.  He represents the citizens of Harlem, East Harlem and the Upper West Side of Manhattan. Before that, I was director of community relations for the NYC Department of Homeless Services.  That job, in particular, exposed me to poverty on a different level.

If I’m honest, I knew nothing about homelessness when I took the job.  In New York, right now, there are approximately 60,000 homeless people, including over 20,000 children.  And the number of Black women and children who are homeless is tragic. Homelessness is actually a Black woman’s issue.

Me: That’s a powerful statement – homelessness is a Black woman’s issue – say more.

Kercena: When we think of the homeless we conjure a stereotype – an image of a person, often a man, on the street.  But many women and Black women, in particular, face high rates of eviction and domestic violence and are in poverty. Poverty is the cause of homelessness.  And, Black women are disproportionately impacted by homelessness and poverty.

Me: Angela Dorn, BlackHer co-founder, and I talk a lot about the fact that single Black women have a median wealth of $200. That means we are completely vulnerable to any financial shock. It’s a frightening reality that so many of us are living so close to the edge.

Kercena: It is and I don’t think it’s just homeless or low-income Black women who struggle.  I have a law degree and an MBA and I have a lot of debt. We’re taught that the pathway out of poverty is education.  And I’ve heard that Black women are outpacing others in the attainment of degrees. But it costs money to get those degrees.

Income and wealth disparities are impacting Black women across the board.

Me: You’re right.  Black women are not a monolith, and some of us have achieved success.  That said, we have economic and other challenges that transcend class because of the legacy of racial and gender discrimination in the U.S.

How do we do more to embrace our similarities?  In particular, as Black women, how do we build bridges across class?

Kercena: I love Maya Angelou’s quote, “We are not our brother’s keeper; we are our brother and we ARE our sister. We must … see community.” We need to reckon with the way that class divides us and address the stigmas around poverty that make it hard for us to talk about our financial lives.

Me: I agree.  We’ll have more influence if we come together as Black women to define and advance a shared agenda versus competing with each other.

Kercena: You’re right. I grew up with a certain amount of privilege and as I mentioned earlier, it was a very eye-opening experience meeting with Black women at shelters.

Meeting a significant number of young women in their early 20s with infants, made me think.  If I had grown up differently, this would be me.

We like to say that personal choices drive our outcomes.  And we judge other Black women for not being as smart or savvy as we are.  But if you grow up in a certain environment, it is hard to have another life.

Me: Amen.  I think that the “personal responsibility” narrative is deeply flawed.  We are products of certain places and times.  The Harvard economist, Raj Chetty, has shown that so much of where you get in life is determined by where you were born.  I’m not sure why it is so hard for us to take action based on this fact.

Kercena: One of my sheroes is Fannie Lou Hamer.  She came from such humble beginnings but became an amazing advocate for change.  We can learn so much from one another if we are intentional about coming together and tackling hard issues.

I also think we need an economic agenda which helps all of us.  As you said, we have more in common than we think. A homeless woman may have different short-term needs than a professional Black woman but, for example, we are united in the need to get out of debt and access capital to start or expand our businesses and go to school.

Me: We were both at the Power Rising Summit in Atlanta in February.  What did you think?

Kercena: It was so powerful!  And I remember thinking that with $1.5 trillion in spending power we can do a lot to move our agenda.

Me: I totally agree.  We could follow the example of the Civil Rights Movement and use our pocketbooks to persuade.  We forget that in addition to protests and marches, Black consumers in Montgomery, Alabama boycotted the buses for a year and a half.  This hurt the city financially and forced it to change.

What else would be on your economic agenda for Black women?

Kercena: We need a livable wage.  I worked on the New York Fight for 15 campaign to raise the minimum wage for fast food workers.  Women and minorities are in these jobs.

It took a lot of money and strategy to do the public protests, get workers arrested, and write Op-Eds, etc.  It’s a whole machine. To God be the Glory, New York agreed to raise the minimum wage.

Let’s get real, people are not getting out of poverty at $15 per hour but the win is still important because it is a start.  Also, it helps people to see Black women as leaders.

Me: Kercena, let me ask you the miracle question.  It’s this time next May and the miracle has occurred for Black women.  What happened?

Kercena:  We’ve elected our first Black woman governor – Stacey Abrams!  Kamala Harris is gearing up for a run for president in 2020.

Me: That would be wonderful.

Kercena: We were able to flip Congress and now it is majority Democratic.  And here in New York, Senator Andrea Stewart Cousins is the first African-American Senate Majority Leader.  In addition, across the country, Black women are gaining more political power and we are advancing an inclusive economic agenda.

Me: I love it!  In addition to a livable wage, what else is on that agenda?

Kercena: We’ve got to make higher education affordable or dare I say, free?!  Next, we’ve got to get minority and women-owned businesses the capital and support they need to get ahead and gain access to bigger contracts.  It’s also really important to support women who want to transition.  I’d love to see stipends or work-study arrangements available for women (young or old) who want to intern to learn a new skill or enter a new field.  Finally, it’s not just a government issue, we also need more corporations to engage in reskilling and upskilling and put more of their budgets behind helping employees advance and gain new skills.

Me: You should run for office!

Kercena: The miracle will happen when every Black woman and girl who wants to be at the top can be at the top.  When Oprah and Ava are not the outliers. They are the norm.

Check out BlackHer’s New Guide for the 2018 Midterm Elections!