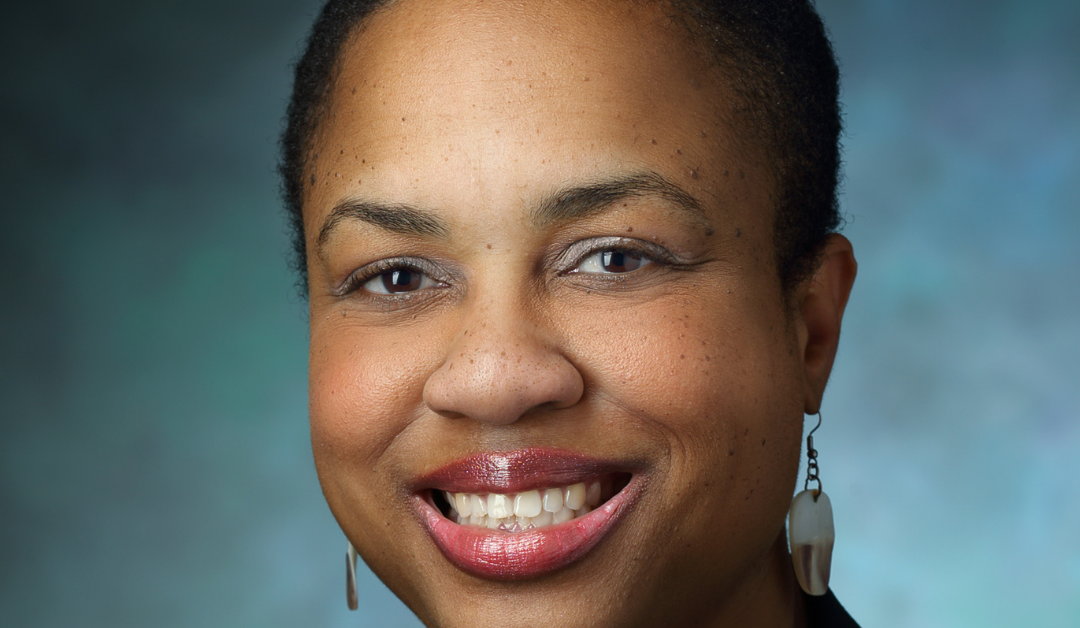 Our BlackHer Shero of the Week is Namandjé Bumpus, the E.K. Marshall and Thomas H. Maren Professor and director of the Department of Pharmacology and Molecular Sciences at the Johns Hopkins University School of Medicine. In 2020, she became the first Black woman to chair a department in the 127-year history of the Johns Hopkins University School of Medicine. Bumpus is a dedicated teacher and mentor, and an outspoken advocate for social justice and anti-racism in science. She earned a BA in biology at Occidental College, a PhD in pharmacology at the University of Michigan, and a postdoctoral fellowship in molecular and experimental medicine at The Scripps Research Institute in La Jolla, CA in 2010.

She also happens to be my first cousin!

How did you become a scientist?

I’ve always had an interest in chemistry. As a young girl, I loved figuring out how things work. For example, if you put a bean in a wet paper towel, it will start to grow. Why does this happen? If you mix two chemicals together, it can cause a reaction. That was thrilling to me. I loved receiving chemistry sets for Kwanzaa and birthdays!

In college, I was actually a biology major. But I realized that I wanted to work on medicines. After I left undergraduate school, I went to graduate school for pharmacology. Please note: pharmacology does not prepare you to become a pharmacist! Pharmacology is the branch of medicine concerned with the uses, effects, and modes of action of drugs. This is what interests me.

As you know, there is a dearth of Black female scientists in the U.S. You are definitely a unicorn. What can we do about that?

On the demand side, we need to create better opportunities, including more leadership roles for women of all backgrounds that are already in science. We also need to focus on the pipeline and developing and hiring more women of color in academia and industry.

I always say that “It’s hard to be what you can’t see.” Was that true for you too? How did you deal with the lack of representation in the field of science as you were coming up?

Few Black women are department chairs or have prominent roles in the scientific community. I remember meeting Dr. Toni Hoover, currently of the Gates Foundation, when I was a PhD student and that had an impact on me. It was very inspiring and encouraging to see her on a panel. Dr. Marion Sewer was another pharmacologist that I looked up to but she wasn’t at my institution.

I will say that even though he doesn’t look like me, my PhD advisor, Dr. Paul Hollenberg, was and continues to be a huge supporter of mine. Having a nurturing advisor is so important. As a student, he helped and encouraged me to attend national conferences, introduced me to people, and nominated me for awards. Having a mentor like that is so critical in the field of science and many others.

What scientific studies are you excited about and working on right now?

My research focuses on developing drugs for infectious diseases and my work has particularly been aimed at HIV treatment and prevention. I’m most interested in determining if there are genetic differences among people that affect a person’s ability to process the drugs used to treat this virus.

When a medication doesn’t work for a person, it is often assumed that they aren’t taking the medication as prescribed. While this certainly can be the case, one of my research goals is to determine if there are biological reasons why some drugs don’t work for some people. As a Black woman, I’m interested in ensuring that we have the right drugs and drug protocols for diseases that disproportionately affect us.

Yes. If we can prove that drugs work differently for different people, we could look at your genes before prescribing any medication and make sure that we identify the right drugs for you.

BlackHer Shero Linda Blount, CEO of the Black Women’s Health Imperative has talked about her frustration with the fact that Black women are often left out of drug trials. Do you agree that this is also a problem?

I think this narrative does us a disservice.

Our underrepresentation in drug trials also occurs because there are structural barriers to our participation. For example, our communities aren’t marketed to. We simply don’t know which clinical trials exist. Also, transportation and missed hours on the job are factors that companies don’t always consider when setting up these trials. There is a lot we can and should do to change this.

Let’s talk for a bit about the medicine that’s on everyone’s mind – the COVID-19 vaccine. Will you take it?

Yes! The data that has been released shows that the clinical trial participants for these vaccines are about ten percent African American, which is higher than the norm. Also, as far as I know, Black folks who have received the vaccine haven’t responded any differently to the vaccine than other people.

In addition to the folks I named above, I admire Stacey Abrams and Kamala Harris. Both are showing us what it looks like to stand up for themselves and for us!

Mae Jemison is also a shero. I met her in 7th grade when my dad brought me and my sister to an event at the University of Massachusetts to meet her. She gave a talk at my school the next day and remembered me. That meant a lot.

I also admire many women in my everyday life.

Let me ask you the miracle question. You go to sleep tonight and wake up tomorrow and it’s January 2022 and a miracle has occurred for Black women. What happened?

We’ve raised funding for increased access to science for Black, Latinx, and Indigenous students. Also, COVID-19 has passed and we are thriving economically.

On Developing the Collective Leadership of Black People: An Interview with Lillian Singh