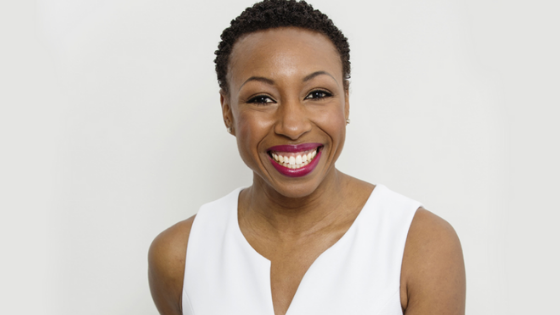 Our BlackHer Shero of the Week is Tiffany Dufu, founder and CEO of The Cru, a peer coaching platform for women looking to accelerate their professional and personal growth.  Dufu is the author of Drop the Ball: Achieving More by Doing Less, a sought-after public speaker, and a businesswoman.  She was a launch team member for Lean In and was chief leadership officer at Levo. Prior to that, Dufu served as president of The White House Project.

Angela:  Can you tell us about your past? What motivated you to achieve?

Tiffany: My life’s work is advancing women and girls. That’s why I am on the planet. I think that one’s purpose is a decision that is inspired by your experiences.

My purpose is related to my mom, Brenda, who found out she was pregnant with me at 19.

Both of my parents are from Watts, California.  When they found they were having me, they were two young, poor black kids who weren’t sure what to do.

My mother knew that with a child coming, they needed a path towards a viable future. They had very few role models.  My mother had an uncle who’d been in the army and who was an army recruiter.  She told her uncle that my father needed to join the army.

Angela:  You had quite a start in life.  Are there other experiences that made you who you are today?

Tiffany: I was ablaze with the feminist flame by the time I was 16. My mom was a non-paid working mom, and I appreciated all that she did.

Dad got out of the military and went to college on the GI bill.  He eventually got a Ph.D. in Divinity.  My father ended up becoming a preacher.  Mom was the preacher’s wife.  They got divorced when I was growing up.  Before the divorce, I thought that “we”, meaning our family, had a nice middle-class life. When my parents divorced I learned that all our family’s prestige was really dads. He was the educated one, the church leader, the person who was being paid.

I was driven to achieve because I saw what can happen to a woman when she is too reliant on a man. That experience drives my ambition and desire to reach as many women as I can, to help them know their strength and learn how to take care of themselves.  That will be on my tombstone.

My mom told me every day, “You are smart, beautiful and you are loved.”  I want all women to know that the same is true for them.

Tiffany: She’s alive as far as I know, but I am not in touch with her. I couldn’t save my mom from the vicious cycle of poverty and addiction which destroyed her life, but I am so grateful that she gave me the strength to believe in myself.

Angela: You’ve helped develop some big brands in the social and corporate sector, including the White House Project and Lean In. Please tell us about your very public and seemingly non-traditional career.

Tiffany: First, with my dad’s help I went to college.  I graduated from the University of Washington in Seattle.  I ended up pursuing a master’s degree and Ph.D. at the University of Washington. I was going to be an English professor.  One day another student asked why I was going to be an English professor. I said because I got great grades on my English papers. I was told that I could be anything and that I had moved in a certain direction because of an “early affirmation” – meaning getting good grades because of my writing.

I could not believe it when she said this to me. It was very liberating. I could be anything.

I started reading about different career options.  I grew interested in working in philanthropy and the nonprofit sector to effectuate social change.

I stopped pursuing my Ph.D. and things took off from there!  I was hired as the associate director of development for Seattle Girls’ School.  When I was hired by Seattle Girls’ School, I did not know how to raise money: a board member realized this and took me under her wing. Her name was Janie Williams and she was my first sponsor.  Janie took me to fundraising meetings with her for six months where I watched her in action. She showed me what to say, showed me how to dress and propped me up in front of a lot of people.  She’d introduce me by saying:  “This is Tiffany.  She’s a superstar.  She’s learning how to raise money.” And in time I did learn.

Angela:  You’ve had a number of “headline jobs,” from working on The White House Project to Lean In.Org.  How did you get these positions?

Tiffany: I achieved a lot of this through help from my sponsors and their contacts and advice.  When I moved to Boston, Janie Williams told me to go to a particular headhunter to find a job.  I did, and I ended up at Simmons College as a major gifts officer.

Women invested their time in me, and following their instructions made the difference. Now I am paying it forward by contributing to other women’s lives.

Angela:  You were also a launch team member of Sheryl Sandberg’s Lean In project.  I’d be remiss if I did not note that we’ve had a lot to say about Leaning In and its ilk at BlackHer, and how it doesn’t work for Black women.

Tiffany: We were never meant to lean in alone!  All of us need scaffolding.  We missed the message on that. If we had communicated that point, it would have taken some of the pressure off women.

Angela: Thanks for that insight! You’ve reached a new level of influence as an author and entrepreneur.  Please tell us about your best-selling book, Drop the Ball.  What is it about?

Tiffany: It’s about achieving more by doing less.  I’ve had career success and I am a mother and wife, so I was getting inundated with the same question from a lot of women: how do you do it all?  At first, as a feminist, I was annoyed by the emphasis on “doing it all,”  but I soon realized that women were really struggling with this. If my life purpose is building up women and girls, I knew I had to answer the question.

The basic premise of the book is that we are all under a lot of pressure.  And that means we are going to drop the ball sometimes and that’s ok.  I want women to re-appropriate the term  “dropping the ball,” to be less about failure and more about letting go of unrealistic expectations, and figuring out what matters most.

Angela:  I love Tiffany’s Epiphanies, which I watch on LinkedIn.  You give a lot of advice in your three-minute videos.  What’s your best advice for Black Women who want to achieve as you have?

Tiffany: I just did a commencement address for Simmons College.  They read this incredible bio of me as an introduction.  I explained that that was the “insta-filter” version of my bio, and that the unfiltered version would talk about my not getting accepted to graduate school when I first applied, and how the first time that I had a job as president of an organization (the White House Project), the board voted to close it.

I told the graduating class that the biggest factor in success is the story that you tell about yourself to yourself, and I have the same advice for Black women. Tell the truth about you. Your adversity can be your street cred.  Lean into your failures. That’s what will get you on the stage giving commencement addresses, not the successes.

Angela:  You are the founder and CEO of The CRU. What is The Cru about?

Tiffany: The Cru is part of my commitment to reaching as many women as I can. At a fundamental level, The CRU is a peer matching and personal network for women who want to grow and reach their goals.  You are matched with nine other women. The ten of you works together (as a crew!) to help each other through advice, connections, and leverage.

I have a crew of sponsors, friends, and mentors. I would not have gotten anywhere without them. They’ve held me accountable for reaching my goals. I could see that more women needed this tool to succeed, but didn’t have the money and time to form a crew of their own.  I took the time to help women do this.

Angela: So, the ladies who are connecting, helping and being accountable to each other are strangers? Does The Cru really work?

Tiffany: Yes, it does. The feedback is that it’s a great lever for participants.  Here’s one theory as to why it works.  These are people who care about you, but they are not invested in your decisions. It doesn’t impact their lives. They support you, help you and tell you what you said you were going to do, but they have no personal or vested interest in whether you do it.

Angela: Let me ask you the miracle question:  You wake up and it’s a year from now, June 2020.  Everything has changed for Black women.  What happened?

Tiffany: Can it be November 2020 and Kamala Harris has been elected President of the U.S.!?   That would be my dream.  The biggest lever for me is LEADERSHIP.  If I could change everything, we would be in charge and we would be running things.

Want to learn more about Tiffany and The Cru?  Read all about it here!  Buy Tiffany’s book Drop the Ball here!