On Being a Trailblazer and Blazing a Trail for Others in Media: An Interview with Dorothy Butler Gilliam 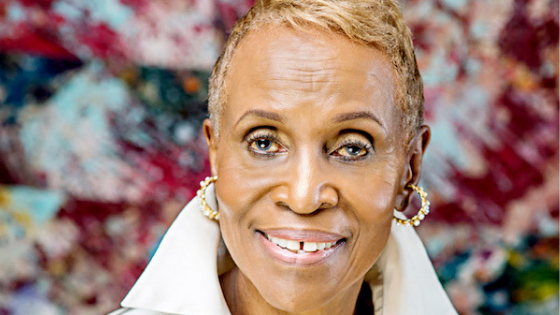 Our BlackHer Shero of the Week is Dorothy Butler Gilliam, award-winning journalist, and a trailblazer whose influence at one of the nation’s top newspapers inspired a generation of women and minorities to enter the media profession. In fact, a more diverse media was a goal Gilliam worked toward all her career. Her second book, Trailblazer, A Pioneering Journalist’s Fight to Make the Media Look More Like America, was published by Center Street in February 2019.

While the headlines of Gilliam’s long career are well known – in 1961, at the age of only 23, she became the first Black woman hired at The Washington Post – the book reveals the personal side of the woman, giving readers a truer sense of the costs of her accomplishments. We learn a great deal about her 20-year marriage to the artist Sam Gilliam; and she describes racially-segregated, early-1960s Washington with a candor that has a lot of people talking. (“The nation’s capital at that time was virtually a colony,” she writes about 1961.)

The book reminds us that she is a product of two historically Black colleges and universities (HBCUs), earning a BA in journalism at Lincoln University, then pulling a stint at Tuskegee University before heading for a Masters at the Columbia School of Journalism.

During and after college she cut her teeth at Black newspapers on the southern side of the “Cotton Curtain” – the Louisville Defender in Louisville, Kentucky and the Tri-State Defender in her home town of Memphis, Tennessee (both offshoots of the legendary Chicago Defender). It was in these years that she fell in love with journalism. Gilliam then spent two years at Jet magazine in Chicago before coming to D.C.

At The Post, she would be mentored by the likes of Simeon Booker and Robert Maynard, two pillars of the profession, themselves trailblazers.

I spoke to Dorothy about her extraordinary life and career:

Karen: Dorothy, this is an honor for me. When I came to Washington in 1994, you were already a columnist, what many would consider the pinnacle for a career newspaper journalist. Twice a week, usually on the train on the way to work, I and every person I knew would check out your column to pick up the latest buzz in D.C. Because you were somewhat of a public figure, because we both worked for Washington news organizations and I met you numerous times, I sort of thought I knew you. But I learned a great deal from the book that I did not know – about your early life, how you got into journalism. So, may we talk about that?

Dorothy: I got into journalism as a college student. Almost immediately I saw it was a profession that could open new worlds to a person. When I saw those new worlds, I was fascinated. I was happy to get picked up by the Tri-State Defender in Memphis.

The Defender had hired me as a secretary, but my break came when the society editor got sick, and Editor Frank Stanley turned to me to cover some stories. That’s how I got introduced to Memphis’ Black elite, a world I had not known existed, and was sent to cover the Kentucky Derby. I was hooked.

Then, I got to cover the “Little Rock Nine,” the infamous moment when the Supreme Court ruling in Brown vs. Board of Education decreed public school integration and then-President Eisenhower sent the National Guard to Arkansas to enforce the judgment. It was hard news.

They tried to keep me out of the trouble zones because I was “just a girl,” but when Mr. Wilson got hurt – he had been traveling with a group of Black journalists that was brutally attacked by a white mob – I grabbed a staff photographer and jumped in the car for the 90-minute drive to Little Rock. That was my first taste of The Movement, but it was not my last. I learned from those journalists how to report in the South, experience that served me well when I went back years later as a national reporter.

Karen: (Laugh) That’s how you know if you’re a real newswoman or newsman. You run toward the trouble while everyone else is running away, right? But that’s all pretty extraordinary for a woman at that time. I mean, Little Rock was a war zone. And most working women back then were secretaries, teachers, or nurses – those were the professionals. For Black women, domestic worker was the most common job title. How did you manage to make the jump out of all those boxes?

Dorothy: Well, both my parents had been teachers, although my father became an AME minister and after starting her family my mother became a domestic. Like most Black parents, mine pushed education. Of their children that lived to adulthood, three of us went to college, and one went to a 2-year technical school and became a tailor.

But you see, once I had tasted journalism, I could see it could be a career that mattered. I saw firsthand how hard the black reporters worked, and how when they got below the “Cotton Curtain” they essentially took their lives into their own hands. The brutality was wrenching. Some reporters had to pretend they were preachers, to get in and out of the south to tell the stories. They would walk around with Bibles under their arms. They would wrap up their typewriters in heavy cloth to conceal them. That’s commitment. I gained a lot of respect for them. And I just had to be part of it.

Karen: So, when you left the South you went to Chicago and worked a couple of years for Jet magazine – one of the two publications, along with Ebony, that every Black family in America had on their coffee table when I was growing up. And this was a real training ground for you.

Dorothy: Yes. There I met people like Era Bell Thompson, the longtime editor-in-chief at Ebony, and Clotye Murdock Larsson, who covered civil rights for Ebony and whose reporting helped keep the Emmett Till trial in the national headlines. I got significant mentoring there. Coming from the South, working for a publication that everybody (Black) wanted to be featured in, they had to school me on who to trust and who not to trust. It was an excellent education.

Karen: I’ve heard newspaper editors say that a college degree isn’t necessarily an asset for a reporter. The ability to get into the trenches and find important untold stories – sometimes described as having a “nose for news” – is said to be much more critical. Yet, you pursued the formal path.

Dorothy: Well, I don’t know about that. I did both. We knew that as Blacks we had to work twice as hard to get half as far and, as I said, we were brought up believing that education would be our ticket out of poverty. I already had a degree, but I went to Columbia because I knew I had to have some white credentials. As for beating the street, I did plenty of that. I talk in the book about what a challenge that could be, for a Black woman at a time when taxis would not pick us up – and how I needed to be really creative to get to assignments and back in time to make our daily deadline.

Karen: As a columnist, you became a voice for Black DC. The city was known unofficially as “Chocolate City” because it became almost 80 percent Black after the unrest of the 1960s. Even though the job carried a lot of prestige, it must have been hard to come up with a scintillating, relevant topic two times a week, every week!

Dorothy: A lot of prestige, yes; but also, a lot of pressure! Suddenly, I didn’t have to get approval for what I wrote. So, I wrote what I honestly thought. Lots of my colleagues didn’t like what I wrote. They would let me know. It was uncomfortable, but I had this platform. The point was to use it, not to pretend to be someone I was not. Sometimes, once my column got through editing, I’d just get the heck out of there.

Karen: You left active reporting in 1998, after close to 40 years in the business. But instead of fading away, you set out to pay it forward. Please talk about the programs you worked on after you left the columnist job.

Dorothy: Passion for diversity in the media is what pushed me to work with young people. We were continually trying to get more young people – our Black young people – into journalism.  We let them know that they had something to say and that their voices deserved to be heard. When the column writing days were over, I wanted to see how else I could be useful in the effort to diversify the media.

I found out in 1997 that there was not a single high school newspaper published in the city of Washington. I was outraged. I got The Post to fund the Young Journalists Development Program. We would send our journalists into the high schools on their lunch hours – to mentor, edit copy, and train students on the ins and outs of newspapers. Some people you’ve heard of – Milton Coleman, who would later be a senior editor of the paper, and the influential journalist David Broder – were among those who participated. (Broder would later say to me: “This is a better newspaper now that we have more diversity.”)

Later, we launched the Prime Movers Media Program, which focused on inner-city schools, where there was little to no training or support for journalism.

Karen: Finally, Dorothy, let me ask you our miracle question. It’s a visioning exercise. You go to sleep tonight and wake up tomorrow, and it’s April 2020. The miracle has occurred for Black women.  What has happened?

Dorothy: The miracle for Black Women would look like no more white supremacy. The racism that’s in the American DNA would be dissolved. No more of the anti-black narrative that has dominated America since the beginning. No more mass incarceration of black men. It would be like the dream Dr. Martin Luther King articulated for the nation. It would look like equality.

“How it feels to be free” – Nina Simone