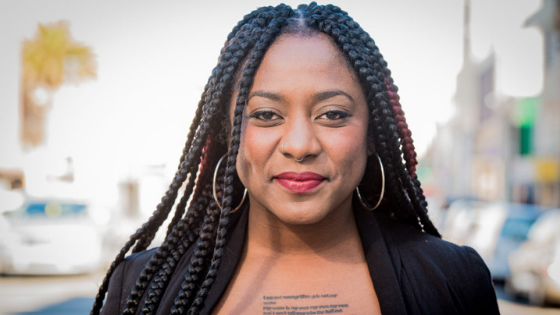 Our BlackHer Shero of the Week is Alicia Garza, the founder of Black Futures Lab, which launched the Black Census Project.  She also serves as the strategy and partnerships director for the National Domestic Workers Alliance, the nation’s leading voice for dignity and fairness for the millions of domestic workers in the United States. She is also the co-creator of the Black Lives Matter Global Network, an international movement and organizing project focused on combating anti-black state-sanctioned violence. She lives and works in Oakland, California.

Jocelyn: Alicia, you ignited a global movement to change Black lives.  Today, I want to talk to you about another powerful initiative you are leading –The Black Census Project.  What is it and why did you start it?

Alicia: The Black Census Project is the first initiative of The Black Futures Lab, an organization I founded about a year ago.  Our goal is to make Black people powerful in politics and build independent progressive Black political power.

Since the enfranchisement of Black folks in the U.S., there have been barriers to our participation in politics.  We are changing that.

To be clear, for us, politics is bigger than political parties.  While Black folks have helped to boost the platform of the Democrats, for us, being in power means making progressive policy and changing the culture, regardless of party.

Jocelyn: Amen!  You use the word progressive.  I think that’s a confusing and even distasteful term for a lot of Black folks.  What does progressive mean to you?

Alicia: It is a confusing term for a lot of Black people because often we don’t see ourselves reflected in progressive movements.  And, if we’re not sure that our lives are better because of these movements it makes sense that we may not want to claim, join, or lead them.

It’s up to us to define what progressive means and what that looks like.

For me, being progressive means having an expansive vision about the important quality of life issues for communities that have been disenfranchised.

Being progressive isn’t just about flipping who is in power.  It’s fundamentally about transforming power so that more people have agency over their own lives.

Also, my definition of progressive includes making progress by tackling the biggest barriers to inclusion.  We do this by centralizing the people who have borne the brunt of underrepresentation and disenfranchisement.

Jocelyn: Let’s talk for a moment about another term – intersectionality.  It’s another word that runs the risk of being diluted and/or misused because people don’t really understand what it means.

Alicia: You’re right.  Intersectionality gets thrown around a lot.  It’s not the same thing as diversity.  It’s also not the same as representation.

Intersectionality is about mapping power.

Alicia: We all have social identities that are prescribed, and these “markers” lead us to experience life in certain ways.  For Black women, the way we experience the world is even more unique.  And our experiences are not subjective.  Our social identities objectively shape our circumstances.

These are the experiences that Black women have because they are Black women.

Jocelyn: As we talk, I notice that you use the word power.  You don’t talk about empowerment.  Why is that?

Alicia: I think we often confuse empowerment for power.  They are not the same.  For example, you don’t see the word empowerment in men’s magazines.  It’s not part of their messaging.  You don’t see the KKK talking about empowerment.  That’s because they have power and aim to keep it.

Empowerment is about making the best of your situation as it is. Power affords you the ability to change your situation.Click To Tweet

Jocelyn: Dr. Brittney Cooper has also talked persuasively about the difference between empowerment and power.  I think it’s something we should be talking about more as Black women.  In my opinion, Black women focus too much on, as you say, doing better in the world as it is vs. disrupting the entire system for the betterment of ourselves and more people.

Alicia:  I want power.  I want Black people to have resources – good schools, access to healthcare, family members out of prison – and more.  This is not about empowerment.

Jocelyn: Let’s go back to the Black Census Project.  Why did you start this amazing project?  And what’s next?

Alicia: As mentioned, the goal of the Black Census Project is to build independent, progressive Black political power.

That starts by changing the narrative of who Black Americans are.  The Black community is not a monolith.  We are urban and rural, liberal and conservative, heterosexual, LGBTQ and gender-nonconforming, immigrants, incarcerated and formerly incarcerated.

Second, even though we are participating in elections at higher rates than other demographics, we often receive the least in return from our elected officials.  We surveyed more than 30,000 Black folks across the nation and asked about their goals for the economy, democracy, and society because we want to define our own agenda.  We asked folks, “What do you want to see for your future?”

Too often, policy decisions are being made on our behalf without our input.  The Black Census Project is changing that.

Our third goal with the Black Census was to make sure that we leave communities better off.  We don’t want to be an extractive force – to show up in communities and just take.  To that end, to date, we’ve invested more than $500,000 in Black-led organizations.  We’ve also trained 106 Black organizers and shared political tools to make change.  Over 11,000 Black people have joined our action list as a result.

Alicia: We’re going to share the results of the Black Census this month.  Our goal is to use the data to influence policy change in cities and states across the nation.

Jocelyn: We promoted the Black Census on BlackHer and a lot of folks told us that they took it, but some folks missed out.  What can they do?

Alicia: Email us at holla@blackfutureslab.org to get involved in future projects of the Black Futures Lab. 2020 is coming and we need all hands on deck!

Jocelyn: Alicia, I’d love to learn more about you as a person.  You’re such an inspiration to so many Black women (including me!) because of the depth of your knowledge about how to build social movements and make structural changes, but also because of how gracious and grounded you seem to be as a person.  How did you become you?!  How did you become, as you call it, a “freedom dreamer”?

We had more explicit conversations about sex, intimacy, and relationships than most. This was at the height of the HIV/AIDS crisis when there was a lack of public conversation about sex.

I moved back to the Bay Area because there is no place like home!  Also, I wanted to find more models for change than advocacy and service.  I became an organizer in the Bay Area and I’ve been doing that work for close to 15 years.  I’ve worked on multiple issues, including gentrification and environmental justice and racism.

In 2013, I joined the National Domestic Workers Alliance and started Black Lives Matter.

Jocelyn: Wow!  You’ve had an amazing career.  My sense is that you launched Black Lives Matter at a time when the other civil rights institutions weren’t speaking to folks.

Alicia:  That’s right.  When we launched Black Lives Matter, there was a real hunger for an up-to-date political organization that reflected the realities of Black people.  Also, we addressed the fact that there was little infrastructure for Black folks to get connected to each other and get involved in advancing our power.

Even though Black Lives Matter launched in 2013, when President Obama was in office, we realized that having a Black president, while amazing, was not enough. Some folks said that we hated President Obama but that’s not true.  I love President Obama, and while that’s true, we can’t be afraid to challenge him.  He often lacked nuance in his narrative about Black folks.  And, it was troubling that he was often calling us to stay calm and work within the system without acknowledging how the legacy of racism had shaped the system he asked us to trust.

Why would you work within a criminal justice system that doesn’t deliver justice?

We gave people an avenue and outlet to act.

Jocelyn: Let me ask you the miracle question.  You go to sleep tonight and wake up and it’s March 2020 and the miracle has occurred for Black women.  What happened?

Alicia: Black women are the most powerful force in this country and are recognized as such.