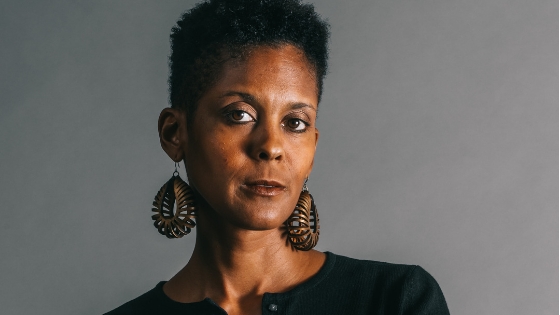 Our BlackHer Shero of the Week is Dani McClain, a reporter on race, reproductive health and activism. McClain is a contributing writer with The Nation and a fellow with TYPE Media Center. She’s the author of the newly released We Live for the We: The Political Power of Black Motherhood.

Jocelyn: Dani, congratulations on your new book!  How and when did you become a writer?

Dani: My mom figures heavily in my book.  She gave me my first journal when I was seven.  I used it for the practice of reflecting on what I was observing and thinking about at a young age.  When I learned about publishing opportunities in high school, I took them. I wrote for the high school newspaper and in college, I wrote for literary journals and did theatre reviews.   Later, I  wrote for alternative weeklies and other political and progressive papers.

In 2006, I got a graduate degree in journalism from Columbia University.  I left Columbia focused on working full time in journalism. At the time, for me that meant going to work for a traditional news outlet – a major metro daily.

I secured two internships, one at the Milwaukee Journal Sentinel and another at the Miami Herald. Then I returned to the Journal Sentinel as a staff reporter covering education.  For two and a half years I worked in newsrooms and it was a good experience because I learned how to work a beat.  That said, I felt culturally out of sync in traditional journalism. We told stories but weren’t supposed to bring much analysis into our reporting.  That felt off to me.

I met James Rucker, a co-founder of Color of Change in 2007 or 2008.  He told me about their efforts to build a rapid-response online organizing platform.  They needed people with skills in research and writing and experience working on deadline.  That was me! So, I moved to Color of Change and was there from 2008 – 2012.

Jocelyn: We met when you were at Color of Change.  Why did you decide to leave?

Dani: I was missing reporting. Eventually, at Color of Change, I was mostly managing process and people and I was moving further away from writing and research.

I applied for and won a fellowship from TYPE Media Center, formerly the Nation Institute.  They provide financial support for independent journalists. I focused on reproductive health and reproductive rights.  At the time, a lot of repro-rights coverage focused on abortion and contraception, which are important issues. But I was meeting organizers and activists who were talking about something else – “reproductive justice.”  They were talking about the human right to have a child, to not have a child, and to parent children we already have, in safe and healthy communities.  Black women had developed this framework 25 years ago.  It was a conversation about families.

Jocelyn: You helped to broaden the conversation about reproduction.

Dani: Yes.  I’ve covered reproductive justice for about 6 years as a freelancer.  I started writing for The Nation. I’m proud of several of the stories I’ve done there, including Long-Acting Contraception Makes Teen Pregnancy Rates Plummet. So Why Are Some Women Still Skeptical?. At that time, I was also writing about the Black Lives Matter movement.  I was developing all these amazing sources and realized that many of these women who were challenging state violence or doing other social justice organizing were also mothers.  I had never talked to them about parenting.

In 2016, I was pregnant, and I was reporting on the Black maternal health crisis.  I experienced some complications with my pregnancy. And I couldn’t find a Black woman obstetrician, doula, or midwife in my area. I interviewed other Black women about their experiences with pregnancy and birth as well as Black birth workers. That’s when I started to understand the challenge of Black women not being listened to in medical settings.  We are three to four times more likely to die from complications due to childbirth.

My research, writing and personal experience crystallized the issue for me.

Jocelyn: Dani, you’ve been talking about the importance of developing a beat and sources to truly understand an issue or story.  What is a beat?

Dani: A beat is a term that journalists use to describe a “coverage area.”  For example, at the Journal Sentinel, I worked the education beat, which meant that I focused on schools and that parents, teachers, administrators, and students were my primary sources.  I sat in school board meetings and classrooms to understand what was happening.   When you work a beat, you develop the relationships necessary to tell fresh stories that haven’t been told yet. Learning to work a beat was a key skill I learned while writing for newspapers.

Jocelyn: Now, you’re a published author. What was the impetus for your new book – We Live for the We: The Political Power of Black Motherhood?

Dani: The book is a result of all these questions that I had when I was pregnant about how to be a parent.  I have a close relationship with my mom and I have developed a close relationship with my daughter’s dad’s mom.  I also have aunts and elders I can turn to with questions. But I was particularly interested in questions about how and when to introduce certain ideas to our children, especially when we are navigating such a challenging social and political climate.

I had spent time organizing and writing about organizing.  I thought, OK. I know all these people but never talk to them about their parenting.  I should interview them about that and get my questions addressed. I can then share this information with the world.

Jocelyn: I love it!

Dani: The book is organized chronologically, as you might think about a child’s development. The first chapter is about pregnancy and birth. The second is about home culture and deals with issues of discipline.  The third chapter is about family formation and how we decide to put our families together. Chapter four deals with the importance of play.  Chapter five is about belonging and how we create community for our children. Chapter six deals with schools. Chapter seven covers the body and sexual health.  Chapter eight is about spiritual development. How do we help our children develop a moral compass, especially when we want to help them learn about a space or philosophy that is different from the one in which we were raised?  Chapter nine, the last chapter of the book, is the most explicitly political.  I share how women are talking about their politics with their kids and expressing political action in the world.

Jocelyn: I can’t wait to read it!  What made you most happy about the book?

Dani: Taking the book on the road and sharing it with people in Cincinnati, Detroit, Chicago, the Bay Area, DC and New York has been so rewarding.  It’s exciting to connect with the Black women who show up and want to have these rich conversations about our parenting.  I’m happy to center black women and be able to reflect their lived experience.

Jocelyn: What has surprised you most about being a mom?

Dani: Before you have a child, people tell you that everything is going to change and it’s true.  I met up with a friend who is in a leadership position. She’s in her late thirties and is thinking about having a child and she wonders if there is enough room in her life for parenting and work.  This is something that I am figuring out for myself as well.  How can I do the work I love and give it the time it deserves and find lots of time with my daughter.

Jocelyn: Dani who are Black women writers that you admire?

Dani: One of the pleasures of writing We Live for the We, was discovering and rediscovering Black women who have been writing about family.

I revisited and drew on the work of sociologist Patricia Hill Collins.  I learned from Audre Lorde’s essay Man Child in her book Sister Outsider.  bell hooks’ writing on patriarchy was essential for me. I also love asha bandele’s Something Like Beautiful: One Single Mother’s Story. Stacey Patton’s Spare the Kids: Why Whupping Won’t Save Black America and Rebecca Walker’s Baby Love were important to me.  When I read Baby Love years ago, I thought ‘This is needed.  There are too few books for Black women contemplating motherhood.’

Jocelyn: Dani, what do you want BlackHer readers to know about your new book or your work?

Dani: I want them to know that it’s for them.  It’s for us. It’s such a privilege to center Black women – our lessons learned, our honest mistakes.

Jocelyn: Let me ask you the Miracle Question.  You go to sleep tonight, and you wake up tomorrow and it’s April 2020 and the miracle has occurred for Black women.  What happened?

Dani: We have accessed even more positions of power.  What we know and already practice in our communities can have a broader impact on the world.