On Changing Things Through Steady, Loving Confrontation: An Interview With Lynda Blackmon Lowery 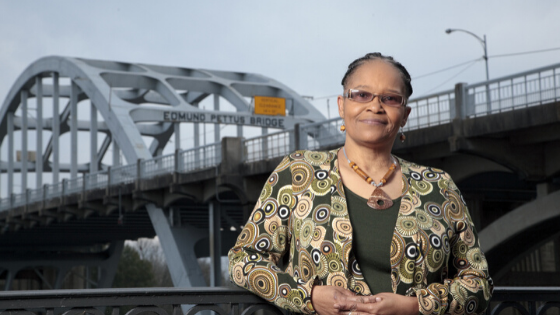 Our BlackHer Shero of the Week is Lynda Blackmon Lowery, the youngest person to participate in the 1965 march for voting rights from Selma to Montgomery, Alabama. Because of activists like Lowery, the Voting Rights Act was passed in August 1965.

Lowery is also the author of Turning 15 on the Road to Freedom: My Story of the 1965 Selma Voting Rights March as told to Elspeth Leacock and Susan Buckley, which has inspired a musical of the same name.

Lynda, thank you for talking to BlackHer! You were born and raised in Selma, and you live there today.  How did you get involved in the Civil Rights movement as a child?

I first got involved in the Civil Rights movement on September 19, 1957, the day my mother died as a result of blood poisoning related to childbirth. I was 7 and the oldest of four children.

I heard adults say that my mother would not have died if she was not colored. She needed a blood transfusion, but in the Jim Crow south, she couldn’t get treatment or blood from a nearby white hospital. Instead, blood was sent to Selma by a Trailways bus from Birmingham, 90 miles away. When the blood arrived at Burwell Infirmary, where my mother was being treated, she had been dead for 15 minutes.

I vowed then that I was going to change things. No one would have to grow up without a mother because of racism if I could do anything about it.

Were you inspired to participate in the Selma movement in the 1960s as a result of hearing Dr. King?

I jumped up in the church that day and said, “That is how I will change things – through steady, loving confrontation!” Dr. King was amazing. There were 500 people in the church, and everybody was mesmerized by him.

Immediately after hearing him speak, I signed up to get training on the principles of non-violence by Dr. Bernard Lafayette, Hosea Williams, and SNCC leader (now Congressman) John Lewis.

My personal Emancipation Proclamation Day was less than two years later on January 2, 1965, at another mass meeting with Dr. King, when he said it was time to move forward to secure our voting rights. He said there would be two marches the next day – one at 9:30 a.m. and one at 12 p.m. I committed to marching.

Dr. King was obviously a giant amongst us. Were there also women in the movement that inspired you?

Yes. Two local women in Selma, Mrs. Amelia Boynton Robinson and Mrs. Marie Foster were part of a local civil rights group called The Courageous 8.  They invited Dr. King to Selma. I was also inspired by Mrs. Colia Lafayette and Mrs. Corretta Scott King, both of whom were very involved in Selma.

How did the movement take hold in Selma?

The Selma movement, just like the Birmingham movement, was a children’s movement. People remember the fire hoses and dogs, that were unleashed on children in Birmingham.

Most of the Black high schoolers in Selma and nearby communities marched. We knew that if our parents protested, they would be jailed and lose their jobs.  We decided it was our job to take on the protests. We had our parents’ support. From January 3, 1965, to March 7, 1965, I marched every day unless I was in jail. I was arrested nine times before the march on the Edmund Pettus Bridge.

What was it living in Selma like during the 1960s?

When I was 9, my father took me to downtown Selma to buy a pair of dress shoes. I was skipping and singing alongside my father. He was walking with me and standing tall and proud. We went into a store called Boston Bargain.  A little white girl, close to my age, looked at my daddy, and asked him, “What you want, nigger?” My father’s shoulders slumped. He squeezed my hand. The little girl brought him down in front of me, his baby, with that word.

I cannot tell that story without crying.

I purposefully use the word “nigger” when I tell this story to make a point.  Back then, in Selma, all Black people were niggers. My father was a nigger, as was I and every Black person I knew.

The N-word was dangerous then, and it’s still dangerous now. Nothing is loving or powerful about that word, no matter who uses it, including Black people. Being a nigger meant someone had ownership of and power over us.  It still means that. We need to erase the word from our vocabulary.

I’ve seen the video, The Woman Who Marched with Martin Luther King, and I was moved by it. Can you tell us what happened to you on Bloody Sunday, March 7, 1965, at the Edmund Pettus Bridge?

The march was led by John Lewis and Hosea Williams. We were not expecting brutality, as there had not been any before then. When we got to the apex of the Edmund Pettus, we saw Alabama State troopers, Selma’s Sheriff Jim Clark, and men on horseback spread across a four-lane highway.

They said we were part of an illegal assembly and that we had 3 minutes to disperse. We followed our usual protocol of kneeling to pray, but the next thing we knew, there were gunshots and thick smoke. Someone pulled me back by my collar.  I resisted. I was hit repeatedly in my face and called the n-word twice. I bit my attacker, which was not non-violent. Next, I remember running into a cloud of tear gas. The man was still hitting me, now on the back of my head. I passed out. When I woke up, people were still running and being hit by law enforcement. I was being put in the back of a hearse.  I told them I was not dead.

As a result of that beating, I received 28 stitches in the back of my head and seven over my right eye.

You’ve written even more about this and your other life experiences in Turning 15 on the Road to Freedom: My Story of the 1965 Selma Voting Rights March, which will soon open as a play in New York.  How did the book and play come about?

I did not talk about Selma for over 40 years. It was like I could not talk about it. When tragedies happen now, they bring counselors in to talk folks through it.  We had none of that. A lot of stuff stayed inside.

Many years ago, my sister Joanne was the director for a time at the National Voting Rights Museum and Institute in Selma. Someone told her about two writers, Elspeth Leacock and Susan Buckley, who wanted to write about children and their participation in freedom movements. My sister told them about me.  Elspeth and Susan put me in their book, Journeys for Freedom. Later, I joined them at a Chicago festival where I told my story to a few hundred kids.

More invitations followed. The more I told my story, the lighter and freer I felt.

Elspeth and Susan helped me to tell my full story in a book about my life; Turning 15 on the Road to Freedom: My Story of the 1965 Selma Voting Rights March as told to Elspeth Leacock and Susan Buckley. Other folks in the artistic community thought Turning 15 would be a good play.  The title of the play is also Turning 15 on the Road to Freedom. Baby, it is a good play, and it’s playing to children’s audiences at churches and small theatres in New York City this month. We’ll also be playing on the road in 10 U.S.cities.

In the 1960’s many young activists like you helped to change our country.  Are today’s young people going to change the world?

Yes! Young people and women will change the world in 2020!  Birmingham children marched against segregation in 1963; the Civil Rights Act passed in 1964. In 1965, the children of Selma protested for Voting Rights. On August 6, 1965, the VRA was passed, ensuring that everyone had the right to vote.

Children, along with women, are inspiring change today.  Our gun laws and fundamental human values are slowly changing because children and women are demanding change.

Let me ask you the miracle question. You go to sleep tonight and wake up in the morning, and it’s January 2021.  The miracle has occurred for Black women. What happened?

There is a female president and vice president.  Females of all kinds, especially Black women, are running this country and showing people how it’s done, period.  We know what we need to do.

Learn more about Lynda Blackmon Lowery and  get your copy of Turning 15 on the Road to Freedom: My Story of the 1965 Selma Voting Rights March

In NYC?  Check out Turning 15 on the Road to Freedom on January 18th and January 19th at the historic Riverside Church.