On Fighting for Fairness and Equality at Work: An Interview with Alma Henderson 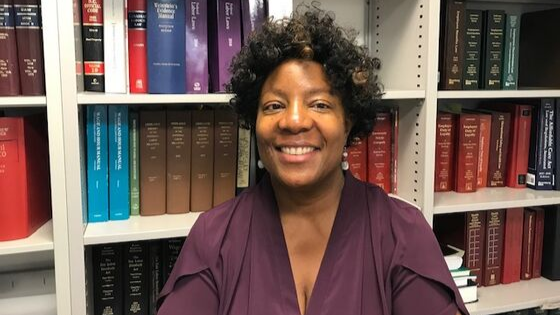 Our BlackHer Shero of the Week is Alma Henderson.  Henderson is associate general counsel at SEIU.  A product of a union home, Henderson stands up for labor every day.  In this interview, she explains why organizing is important for Black women.

I am an associate general counsel for SEIU, one of the largest labor unions in the United States.  I grew up in a union household in St. Louis, Missouri and became a union supporter at an early age.  My dad was an assembly line worker for Chrysler for almost 30 years. My parents always impressed on us that dad’s union job included benefits that allowed him to support our family.

Growing up in St. Louis, I saw lots of Black families struggle.  These families were as hardworking as mine, but they didn’t do as well because they did not have as much economic security.  My dad’s job, along with the push that we got from our mother, put my siblings and me on a different path. I grew up knowing the importance of union work and wages and how some security could make your life better. I could literally see it in front of me.

What does SEIU do?

SEIU represents 2.1 million workers in the U.S. and Canada. Our members work in the services industry.  SEIU members are security guards, janitors, and airport cleaners. They work in wheelchair transport, health care, and many other places.  The majority of our members are Black and Brown women.

SEIU is also working to organize fast-food workers in the Fight for $15, a national campaign to advance a $15 per hour minimum wage.

What is Fight for Fifteen about?

Fast-food workers in most states earn the federal minimum wage, which is $7.25 per hour and has not increased since 2009. Fast-food workers are pressing for help in their efforts to bring attention to the fact that they do not earn a living wage.  If these workers earned $15 per hour, their wages would be much closer to a living wage.

SEIU seems to have some avenues for growth, which is interesting. I’ve read that union membership is declining in the U.S. right now, with only 10% of American workers in unions.  Why is that?

That’s a mistake because it is not a zero-sum game. Something being good for workers is not necessarily bad for business, especially given the fact that businesses need workers to succeed.

Your website says “SEIU is united by the belief in the dignity and worth of workers and the services they provide and is dedicated to improving the lives of workers and their families and creating a more just and humane society.”  What great core values.  Why don’t more workers see the value of joining unions, making more money and working together to make things better for themselves?

People don’t know that the labor movement has made things better for everyone. People have to be shown that value. If it weren’t for the sacrifices of people in the labor movement, we would not have minimum wages, OSHA regulations, a forty-hour work week, and many other things.

For me, it was very simple. Because he was a Chrysler worker, my father’s job enabled us to have a few things that made our lives so much easier.  For example, we had a car when a lot of people in our neighborhood couldn’t afford one. That car was essential. My dad’s job was 40 miles out of St. Louis. Having a car ensured that he got to work every day on time.

Many people in my neighborhood had to rely on unreliable public transportation to get to work. This made it harder for them to keep and do their jobs well.

All of this showed me that life is totally random. I was born into a union household which meant that there were some things in my life that I did not have to worry about.  My father had a good job that we could depend upon. There would be food on the table. My siblings and I could go to a good private school.

You figured this out as a child.  What should Black Women know about labor unions now?

Black women should know that unions help them and other workers live better.  Unionized Black women make 37% more money on average than Black women who are not unionized.  In our world, we call this “the union advantage” or the “unionization effect.” Today, Black women and unions are a natural match. Black women have been fighting for years for justice and equal opportunity. America’s unions stand with people fighting for fairness and equality.

Do unions get involved in elections?  If so, how?

Yes, definitely. A lot of union members volunteer in voter registration drives.  They educate people on issues that are important to working people, like higher wages and better wage laws. They explain how the issues can benefit an entire community.  Unions also endorse candidates who support pro-labor policies, like a $15 an hour minimum wage, and income equality. For the 2020 elections, there are summits taking place where candidates are talking to labor unions and answering questions from members.

Can the American people come together through workplace organizing?

Absolutely. Unions show us this. The history of discrimination in unions is fading. SEIU is committed to equality, which means we’re striving for a discrimination-free workforce, and pressing for societal advancements in areas where we have fallen short.

Years ago skilled trades unions like construction workers, welders, and others did not have large numbers of women or workers or color, but that’s changing. Today, union workers of all kinds recognize and come together to advance their common interests.

Let me ask you the miracle question. You go to sleep tonight and wake up tomorrow and a year has passed, and a miracle has occurred for Black women.   What happened?

Black women are leading the pack across all age and demographic groups in election turn out! Just like we did in 2018.  And Senator Kamala Harris is the democratic nominee for President.

Yes, Impeachment for That.