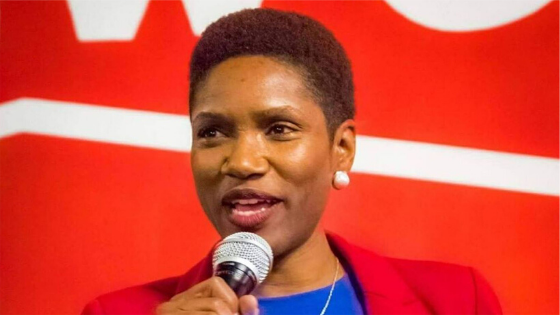 Tamara, thanks for talking to BlackHer.  You are running for the United States Senate.  That’s a very big deal. Can you tell us a little about yourself and how you got here?

The problem in my industry is that beauty and barber professionals are not organized.  We’re artists and beyond interacting with state licensing boards, we don’t often engage in politics. This is where my organization came in.  We engaged professionals in fighting for laws to protect our health and safety.

In 2014, I felt a calling to run for the Georgia State Senate.  I was tired of what was happening in my district. The politics were divisive and entrenched.  In 2014, I won my primary election and then went on to win 37% of the vote against my Republican opponent in the general election.  I stayed in the fight and ran again in 2016 and did much better the second time. I had no challenger in the Democratic Primary and in the general election, I garnered 43% of the vote against the same Republican opponent.  I felt really good about a third run in 2018, but this time, I had a challenger in the primary and it got interesting.

There was an undercurrent of racism in the 2018 election that I had not experienced in my previous campaigns.  My Democratic challenger was a white woman named Sally Harrell. Some folks, including some of my volunteers, considered her more “electable” because my district is predominantly white.  This broke my heart and almost broke my spirit. After running three times, building and nurturing relationships, and working so hard to defeat a staunch Republican, I was suddenly less electable because I was Black.  It was a painful experience. I lost in the primary to Harrell, who did not have a Black agenda. She then went on to win the general election by riding the coattails of Stacey Abrams. It was very frustrating to see a white woman win because of the Black and brown voters who voted for Stacey Abrams.

It sounds like a very hard experience.  But running for U.S. Senate will be even harder.  How do you think about that?

This is a very interesting time in Georgia politics.  We have two Senate seats on the ballot in 2020 and demographically speaking, Georgia is becoming a majority-minority state.  I believe there is an opening for Black women to win and lead. Stacey Abram’s campaign for governor helped prove that.

I see Stacey Abrams as a modern-day Moses.  She did a phenomenal job galvanizing Black voters and because of her, the Democratic Party is waking up.  Democrats know that they can’t get elected if they ignore Black people.

I see myself as a modern-day Joshua.  I am centering the issues of Black people and my goal is to galvanize the next generation of Black voters.  We must give a voice to Black voters and ensure that we have a place in politics. This next generation is not waiting or asking for this place, they are taking it.  Black people have done too much work in this country for our needs to be ignored.

One of the things that I love about your policy platform is that you are absolutely clear about the need for reparations.  Can you say more about that?

Yes, I am absolutely clear about the need for reparations and I am very vocal about it.  I am 47 years old and my lineage dates back to slavery. I was the first in my family to get a bachelor’s degree.  I was born and raised in Savannah, in Chatham County, Georgia but my family is from Effingham and Bryan, Georgia, two very rural counties.

At 47, I shouldn’t remember the outhouses, the tin roofs, and the tobacco truck coming by to take my family members to work, but I do.  There is a debt owed to American Descendants of Slavery (ADOS). Far too many of us are still living with the devastation and generational trauma caused by historic and present-day systemic racism.  In addition to slavery, ADOS experienced the Black Codes and Jim Crow laws, convict leasing, redlining and exclusion from government programs like the GI Bill and the New Deal. Now, we are suffering because of the War on Drugs and mass incarceration.  We are a broken people. America has a debt to pay to ADOS and reparations are past due. In the words of Dr. King, “we are coming to get our check.” That is why I am running and why I am reaching out to ADOS to help me do it. My goal is to create a federal agency to provide the funding we need to address reparations.

You mentioned ADOS.  The ADOS movement has been criticized for being racist at worst and divisive at best when it comes to immigrants and other Black people.  Won’t that hurt your candidacy? How are you thinking about that?

The ADOS movement is the voice of pain for a lot of people who are demanding to have their needs addressed.  I do not believe that is racist. The data shows that unless something changes Black America, the net worth of Black Americans will move to zero by 2053.  I believe that seeking reparations is a form of self-preservation.

The ADOS movement is not perfect. I myself, have been attacked and criticized on Twitter by people in the ADOS movement regarding my stance on immigration even though I am an ADOS. My agenda specifically says that we should “allow immigrants a pathway to citizenship that first addresses the needs of American Descendants of Slavery and Americans who are the working poor.” I have had to defend that statement even though I have placed ADOS in the forefront of my campaign issues.

American Descendants of Slavery built this country and want to make sure that their needs are met and that reparations are on every candidate’s political agenda. I do not think ADOS is divisive.  I think they are being strategic and you know the saying, “the squeaky wheel gets the grease.”

In an interview with Egberto Willies on Politics Done Right, you talk about the brokenness of many African Americans and the need for Black folks to come together to get our own house in order here in the U.S.  Can you say more about that?

Slavery broke us as a people.  We are all clear about that and there is a lot of healing that needs to happen both individually and collectively. Our healing must be led by qualified professionals and experts.  This is a part of reparations.

How can BlackHer subscribers help you?

They can volunteer for and donate to my campaign and spread the word about my candidacy.  I need BlackHer subscribers to do whatever they can to help me take a reparations agenda to Washington.

Harriet Tubman, Shirley Chisholm, and Angela Davis.  I am channeling them in my work.

We are respected, we are trusted and we are leading.

BlackHer does not endorse ADOS.