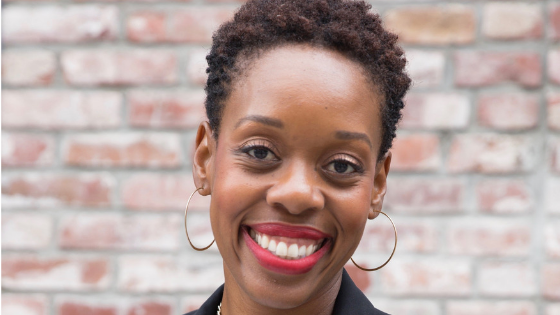 Angela:  Hello Shiju.  Thank you for talking with BlackHer. Please tell us about your past.

Shijuade: I grew up in Atlanta, Georgia and I have three sisters.  I am a first-generation U.S. citizen; both of my parents emigrated to the United States. My mother is from Trinidad, and my Dad is from Nigeria. The mantra that I heard growing up was “work hard and then work harder.”  My parents followed this mantra themselves.

My dad has his Ph.D. and my mom is a physician. Because of my parents, I grew up with intellectual curiosity, awareness, and pride in my Black identity. I was always reading and listening to learn more about Black culture.  I have been very proud of Black people from a very young age.

My parents also told us, “We want you to be successful, but your responsibility goes beyond you. You should help others, either in your profession or outside of work.” They believed in the adage: to those whom much is given, much is expected.

Like me, all my friends were first generation Americans.  We had the same ethics and exposure. Work hard at school; listen to NPR at 10 pm every night.  Our parents helped to instill pride in us based on our brilliance as Black people. We were reminded that Black people have a proud history beyond what kids are taught in school. I carry these values and traditions with me to this day and my wife and I are passing them on to our three-year-old.

Angela: You have been involved in policy and the LGBTQ community.  What led you to that work?

Shijuade: I got started on my current path in college at Emory University in Atlanta.

As an undergraduate, I participated in a fellowship on community building and social change.  The program focused on environmental issues and social change in the Atlanta community.  There were lots of landfills and dumping grounds in an area near a more urban, predominantly Black section of Atlanta.  There was also underutilized green space in the area.  People assumed that Black people didn’t like to be outside in the parks – which was weird.

As part of my classwork, I talked to Black people in the community about the landfills and the parks.  They told me that they didn’t go to parks because the best ones were only open from 9 am to 5 pm during the week. The parks that were open on weekends were not well-lit or monitored and were places where illicit activity occurred.  The people needed support to change park hours and to petition the city to make them usable.

We worked with them and the people won! Park hours were expanded, and they got the services that made them safer places for families: the parks were cleaned up, monitored by law enforcement and/or expanded their hours. The energy and excitement around this win were awesome.  I learned how to leverage community power effectively. I had always wanted to be a lawyer because I wanted to work for social change.  This experience made me realize that there are many career paths that a lawyer can pursue to create change, including through community organizing and policy advocacy.

After college, I got a master’s degree in public health along with a law degree from Emory. I wanted to understand the science behind health disparities and use the law to remedy those disparities.

My first full-time job out of law school was for the Brooklyn Defender Services in their child welfare practice.  I spent over four years there representing parents who were in danger of losing their children due to abuse and neglect charges. The law was often biased against my clients, who were poor Black and Latina women.  White, male judges looked down on my clients and made condescending speeches to them about their weaknesses as parents.

After a few years, I felt like I could only be as good as the laws to which I had access.

I knew I wanted to get into policy advocacy because I thought I could do more for people as a policymaker than as a litigator.  I landed at the New York City Council as a legislative attorney.  I was assigned to do work for the Committee on Housing and Buildings and the Committee on Governmental Operations. I learned all about the Council and who you must be “in with” to work the system. I knew I would take this information with me when I left.

At some point, a mentor told me that The Lesbian, Gay, Bisexual, and Transgender Community Center was looking for a government relations person.  My first reaction was that I was not ready for the personal to become professional. I am a queer woman. I wasn’t sure that I wanted my entire life to be centered around my work.

I got over my concerns and interviewed for the job and I got it. I have been at The Center for almost four years.  I like my job and appreciate the opportunity to build and grow an entire space here, including serving as the first woman of color on the executive leadership team!

Today, I am the chief advocacy officer at The Center.  I oversee government relations, government fundraising, program management, and a statewide advocacy program, called RiseOut.

I’ve brought an intersectional lens to The Center. LGBTQ people exist in all forms, including as women and as people of color (“POC”). I can see the impact of my point of view, while still working on the challenge of bringing a wider lens to the space.

Angela:  What does The Center do?

Shijuade: We offer a wide range of social service programs for the LGBTQ community, from substance abuse clinics to programs to keep kids from entering the child welfare system, or becoming homeless because they are queer or TGNC (transgender nonconforming.)

In many ways, The Center is a single stop for help for people in the LGBTQ community.  We are a nonprofit community service center that is highly responsive to our community’s needs, while also being mindful of our privilege as “the providers.”

Historically, The Center focused on serving white, gay men.  This changed over time.

Our services are low-cost or free, so by default, a lot of people of color take advantage of them, as that is the community most in need in New York City.  The Center is evolving and now, more intentional outreach and engagement are taking place to connect with and serve queer POC.   I have had many hard conversations with leaders about checking our privilege and evolving our organizational identity. This has led to more engagement with queer POC and more intentional conversations about diversity, equity, and inclusion.

Shijuade: Black women are generally pro-solidarity with other Black women. We’ve had to be.  We tend to support each other at all costs, regardless of sexual preference or gender identity. However, folks are not always down with gender identity politics.

Angela: It seems like there is a crisis with respect to violence against and murder of Black trans women.  How do we fight back and protect these women?

Sadly, murders of Black trans women are often perpetrated by cisgender (a person whose sense of personal identity and gender corresponds with their birth sex) black male partners. The Black community should call them on it, even knowing the struggle that Black men face in the U.S. with the criminal justice system.  We can’t allow our sisters to be murdered because of the pain that our men feel.  We must address toxic black male masculinity.  A trans woman’s life should be as safe and affirmed as a Black man’s life.

We also need to address the larger disdain and violence toward the Other in this society. It contributes to the transphobia that exists in this country.

For example, until Wednesday, June 19, 2019, you could violently attack someone and kill them in New York City because you were freaked out and felt “threatened” by the person’s sexual orientation or gender identity. It was true in New York and 45 other states. It’s called the Gay and Trans Panic Defense.  It allowed defendants to cite a victim’s sexual orientation or gender identity to justify their crime. It was used as recently as 2013 in the murder of a transwoman in Harlem named Islan Nettles. We got this law overturned in New York last week. The Gay and Trans Panic Defense has been banned in New York!

Angela: Let me ask you the Miracle Question. You go to sleep tonight and wake up tomorrow and it’s July 2020 and a miracle has occurred for Black women. What happened?

Shijuade: America values and appreciates Black women so much that an appropriate percentage of Black women are in elected office.  This could translate into a Black woman as president or head of the Democratic National Committee.  We are the most reliable voters!  We are relied upon and engaged; it would be great to see that completely flipped.  When you are looking at the world from a Black, queer, feminist perspective, you are operating with a tide that lifts all boats; everybody is better off because Black women are inclusive.