On Following and Amplifying the Leadership of Black Women: An Interview with LaTosha Brown 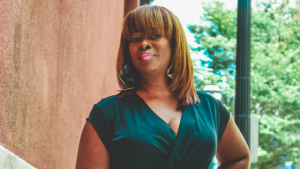 Building our personal, economic, and political power by getting educated, organized and taking action for progressive change, that’s what we’re all about at BlackHer!

This week, we were thrilled to catch up with LaTosha Brown, co-founder of Black Voters Matter Fund and a member of the board of directors of The National Coalition on Black Civic Participation.  Brown is also a professional singer.

Me: I just listened to your wonderful performance of “I Know I’ve Been Changed” on YouTube.  Wow! How do you combine your artistry and activism?

LaTosha: Thank you for asking!  I pushed my creative projects to the side several months ago because Trump and his gang are crazy as hell and I felt like I had to put all of my energy into funding and organizing folks.  But neglecting my art made me feel so hopeless. I literally felt like I was dying.

I’m an artist and an activist.  It’s important that my work incorporates both parts of myself. Every time I speak, I sing.  Because both of those things are a part of me and I want to show up in spaces as my whole self.

For my birthday I’m going to complete an album.  And celebrate with a release.

Me: Ooh!  I want an invitation.

LaTosha:  I’ll send you one!

Me: The Civil Rights Movement was steeped in song.  Would you say that you are following in that tradition?

LaTosha: That’s right.  I do freedom songs but I also do modern stuff too.

Me: Why did you start the Black Voters Matter Fund?

LaTosha: My co-founder, Cliff Albright, and I have been doing voter engagement and power-building work for the past 25 years.

We started Black Voters Matter Fund for three reasons.  First, we observed that there are a lot of groups and people hard at work in our community.  We just don’t get the investment we need.  We saw an opportunity and need to build an independent Black political infrastructure.  So, that was the reason that we incorporated as a fund.  We want to get more resources to the ground.

Second, we have a network approach to doing organizing work.  And we know the influencers in communities.  For example, everyone knows that the pastor is not the one running the church.  There is always a sister running things.  She’s somebody who knows what’s going on.

In many organizations, it’s the people with the titles and the positions who are the messengers.  But not here.  We know the women who have the street cred and the track records of getting things done.  The ones who are respected.  They are the critical part of the ecosystem.

LaTosha: We start every training with the question, “What does the landscape look like?”  And we’re comfortable with the depth, breadth and even the gaps in how leadership shows up.

Finally, we started Black Voters Matter Fund because we wanted to be intentional in prioritizing the leadership of Black women.

LaTosha: We have five principles for our work.  And one of them is lifting, supporting, and amplifying the leadership of Black women.

I’ll give you an example.  There is one woman we work with and she really doesn’t know how to use a computer but she can organize her butt off.  Her value, her leadership would get minimized by others.  But we’re clear about the fact that leadership shows up in different ways.

For us, elections aren’t the end.  They are actually an opportunity to build the capacity of the grassroots groups and leaders already dong this work.

Me: I think that’s so important.  And makes so much sense.  Why reinvent the wheel?  Why not build on your existing strengths?  Then you have a lasting infrastructure.

LaTosha: I want to say something about that.  There is a lot of talk about the need to build infrastructure in Black communities but we need to reexamine this.

LaTosha: There has always been an infrastructure in Black communities.  Slaves had a system of moving food and protecting others.  The perfect example of this is the Underground Railroad.  It was a network of organizations and people.

Me: So true.  And that’s a problem because we all know of institutions with lots of resources that haven’t done as much as they could to build an infrastructure to harness and amplify Black women’s power.  Speaking of institutions, what do you make of the Democratic National Committee’s (DNC) recent pledge to invest in training and listening to Black women.

LaTosha: Now they’re going to train us?  Train us to do what?  White women need to be trained.  53 percent of them voted for Trump.

LaTosha: It’s so typical.  This may be another way for white folks to feel good about themselves by teaching us things we already know.  It’s like being hungry and being offered a bite of cake.  What about sharing leadership, resources and following our vision?

LaTosha: We need endorsements, support, and funding.  The DNC needs to support the organizations already doing this training, not hire new folks to come teach us nothing new.

Me: So who is doing this work well?  Who is investing in Black women’s leadership in an authentic and powerful way?

LaTosha: The Black Women’s Roundtable.  They are consistent and are bringing women organizers together across sectors.  At one of their conferences, you will find a CEO and a woman out of prison sitting next to each other.  They don’t flex around titles. That’s not what their space is about.

Me: Let me ask you the Miracle Question.  You go to sleep tonight and wake up in the morning and it’s July 2019 and the miracle has occurred for Black women.  What happened?

LaTosha: Trump and Jeff Sessions and the rest of his gang are kidnapped by a group of Martians and shipped off to a new colony on Mars.

Me: Are you sure you want to wish that on the Martians?

LaTosha: HaHa!  I believe the Martians will be OK.  They won’t wait as long as we have waited by being civil!  Oh, and they can take the 53% of White women who voted for Trump with them too.

For Black women, a $100M fund has been set up that is specifically allocated to supporting the vision and capacity-building work of progressives.  We’ll call it the SisterPower Building Fund.

LaTosha: And that will just be seed money.  It will be a fund that is constructed and envisioned by Black women.

Me: Who are your BlackHer Sheroes?

LaTosha: I love how she led in a place that she was from.  She was indigenous to this community.  She was a sharecropper who started a third political party – The Mississippi Freedom Democratic Party.

Me: She’s an incredible inspiration.

LaTosha: And, of course, there is Ida B. Wells.  She was also incredibly courageous.  She was a leader in the suffrage movement and she changed the game as a journalist.

I know I’ll get laughed at for this but I love Oprah too!

LaTosha: She totally accepts herself and she brings her best self to bear in every situation.  I admire her high level of self-awareness.

LaTosha: I know her songs are depressing but I love the depth and rawness of Nina Simone’s voice.  And she was an amazing artist and activist in her own right too.  In terms of Black women who are alive, I’m impressed by Ava DuVernay.  She is intentional about combining her art and activism.

Me: If people read this and want to get involved in the 2018 election, what should they do next?

LaTosha: They can call Black Voters Matter Fund or go to our site or connect with us on Twitter or Facebook. Any Black woman who wants to get involved, we’ll find a place for her.  Also, they can join the Black Women’s Roundtable.

One other thing that I want to mention.  I am working on a documentary film called, Saving the Black Belt.

Me: Wow! You really are busy.

LaTosha: It will be out in a year.  My close friend, April Albright and I, own The Way Productions.  The documentary looks at how Black women are dealing with our own struggles even as we do so much for others.  How we find time for our own healing and humanity.

The POTUS Nominates Another Supreme Court Justice: What Can Black Women Expect From Judge Kavanaugh?

What We Get Wrong About Closing the Racial Wealth Gap