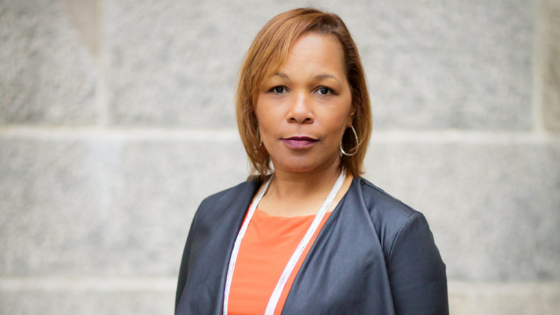 Our BlackHer Shero of the Week is Judith Browne Dianis, executive director of Advancement Project’s national office.  Browne Dianis is a civil rights attorney and has protected the rights of people of color during some of the greatest civil rights crises of our modern times, including in Florida after the 2000 election and in New Orleans after Hurricane Katrina.

Jocelyn: How and why did you become a civil rights lawyer?

Judith: Growing up I didn’t really know what a lawyer was, but I wanted to be one because I had an uncle – Kenneth Browne – who was a judge in Queens.  I remember driving by his election posters on trees.  I thought that was pretty cool!

Jocelyn: I love it.

Judith: In college, I became an activist and protested racist incidents that occurred on campus.  My mother was also very involved in the NAACP.  My “Race IQ” grew.  That said, in graduate school, everyone was going into banking and I followed suit.

Unfortunately, soon after starting my banking job, I was a victim of racial discrimination at work.

That was it for me.  I was determined to go to law school.  I went to law school to stop white people from discriminating against Black people.

Jocelyn: You were motivated.

Judith: Yes.  In law school, I learned about all the landmark civil rights cases.  I became the head of the National Black Law Student Association.  After that, I got a fellowship to go work for the NAACP Legal Defense Fund (LDF).

Because of my experience in banking, I was determined to may them pay so my fellowship focused on banks.  I was focused on suing the banks for racial discrimination in mortgage lending.

Judith: I worked on some of the first cases filed in the U.S. on discrimination in mortgage lending.  I spent five years at LDF and rose to managing attorney of the Washington, DC office.

Jocelyn: That’s a significant role.  Why did you decide to leave?

Judith: It’s interesting.  The Advancement Project is the offspring of LDF.  There were four of us that left LDF to start it.  Connie Rice and Molly Munger were in California and Penda Hair and I were based here in DC.

In the 90s, there was a recognition that the courts were moving to the right.  Right-wing judges were being appointed to the federal bench.  And, our sense was that we were also losing battles in the court of public opinion.  For example in 1996, in California, there were intense fights around California Affirmative Action, Proposition 209.  Ultimately, we lost the fight in court and in the public arena and it was devastating.

Connie, Molly, and Penda and I wanted to build an organization that was attached to the racial justice movement.  We wanted to be part of building power in communities of color and supporting them.  We reasoned that if we could lift up the stories of the people, we could change public opinion, which would eventually shift the court in the right direction.  In short, we believed that we’d have more success in advancing civil rights if the law followed the movement, not the other way around.

For example, if you look at gay marriage, judges didn’t wake up one day and determine that gay marriage should be legalized.  It was the gay rights movement that changed the way people think.  Changes in public opinion drive legal changes.  This strategy comes straight from the civil rights movement.

Jocelyn: That’s so interesting.  Can you say more about the role of communications in movement building?

Judith: Yes.  We forget that the civil rights leaders of the 1960s were very savvy about public relations.  They used media in very strategic ways to show the violence that was occurring in the south.  It was this coverage that helped transform public opinion about voter suppression, Jim Crow, and more. We wanted to get back to centering organizers and supporting them while also shifting the narrative on race and racism.

Judith: We also started the Advancement Project with the idea that we must be responsive to the changing demographics of the country.  We knew that racism affects all communities of color.  For example, immigration policies often stem from anti-Blackness and are used to divide us.  We wanted to align communities of color in the fight for justice and build multi-racial political power as we become the majority.

We asked ourselves, “How do we build the multi-racial community that this country is premised on?”

Jocelyn: So, do you know what a civil rights lawyer does, now?

Judith: Ha-ha.  I know what this civil rights lawyer does.  My brand of lawyering is not traditional.  Yes, we do litigation on behalf of nonprofits and the movement.  But the grassroots organizations are our clients and partners.  We subscribe to Ella Baker’s belief in the genius of ordinary people.  People who are on the ground are brilliant.  They understand their political context and have ideas about the solutions to their problems.

Jocelyn: Amen.  Judith, I was amazed to see that you’ve been working on voting rights issues for nearly twenty years.  How do you stay positive?

Judith: Voter suppression and the desire to restrict the ability of certain people to vote has been with us since the founding of the country.  There has always been a fight over who does and doesn’t get to participate in our democracy.  Black folks have had a long road to the ballot, but other groups have struggled as well.  That’s because voting is power.

White, land-owning men have power and they want to keep it.  It’s as simple as that.

When slavery ended, Blacks outnumbered whites in the south.  To stay in power, white folks denied us the right to vote.  In the 1960s, Jim Crow laws slowed and blocked our civic participation.  Hundreds of years later, we’re still fighting.

People in power today see how the demographics of our country are changing.  They know that by 2042, whites will not be in the majority in the U.S.  The only way they can stay in control is by changing the rules of engagement once again.  And so, they are making it harder for people to vote and they are kicking voters of color off the rolls.  They are changing laws and/or administrative rules to stay on top.

It’s hard to know what’s coming at us next.  But in Florida, in the 2000 election, we saw the cracks in our democracy.  It was a wakeup call.

Jocelyn: How do we address these “shape-shifting” forms of voter suppression?  How do we secure and protect our voter rights once and for all?

Judith: Clearly, we need to restore the Voting Rights Act but to do that we’ll need the right President and Congress.  At Advancement Project’s national office, we’re also working on a constitutional amendment.

Voting is not a constitutional right.  And because of that, the courts have leeway to interpret when they hear these voter suppression cases.

Judith: Ultimately, we believe that to get the courts to rule differently, they need different guidance.  We want to make voting as strong a right as owning a gun.

Judith: In addition, we’re pushing for national voting standards.  Every four years, we’re all voting for the President but registration deadlines and other rules about voting vary widely by state. It makes no sense.

Finally, we must address the voting rights of people who have felony convictions.  One of the intended consequences of the mass incarceration of Black folks is the devastating impact that it’s had on our ability to vote. There are only two states in the U.S. where your right to vote is not stripped if you are convicted of a felony.  We are working to change this.  Why should I lose my right to vote because I’m caught shoplifting?  And, as we know, too many of our people are innocent but in the system.

On November 6th, Florida voters will decide whether residents with felony convictions should vote.  A yes vote on the Amendment 4 ballot initiative, will support the automatic restoration of voting rights for people with a felony record, except those convicted of murder or a felony sexual offense, upon completion of their sentences.  We are talking about 1.4 million Floridians, including 600K Black folks, whose voting rights could be restored. It would be a game-changer for Florida and our country.

Jocelyn: That is wonderful.  So that gives you hope?

Judith: Yes.  You must be an optimist if you’re going to do this work.  You have to believe in a different world.  I have a vision of the freedom that I want Black people to enjoy.  I just have to do my part.

Jocelyn: What do you want Black women to know about the Advancement Project’s national office.

Judith: While we don’t just work for Black women, the issues we work on – voting rights, criminal justice reform, and educational justice – these are Black women’s issues. For example, we are interrupting the “school to prison” pipeline and ensuring that our babies are not pushed out and are safe in school from police.  We’re fighting for our families and communities.  That is what Black women do.  We’re the keepers, in many ways, the connectors in communities.

Jocelyn: Who are your BlackHer sheroes?

Judith: My mom.  She passed away in 2001 but she was a hell-raiser.  As mentioned above, I admire Ella Baker who was a consummate strategist and believed in the genius of everyday people like Fannie Lou Baker, another shero of mine.

Jocelyn: Let me ask you the Miracle Question. You go to sleep tonight, and you wake up and it’s October 2019.  The miracle has occurred for Black women.  What happened?

Judith: There is a Black woman president.  And there is a Black woman serving at every level of government – school board, mayor, governor – in every state.  We are bringing our sensibility and kickassness to bear.  The beauty of our leadership is on display and put to work.