On Helping Americans Get Healthy Without Going Broke: An Interview with Congresswoman Donna Edwards 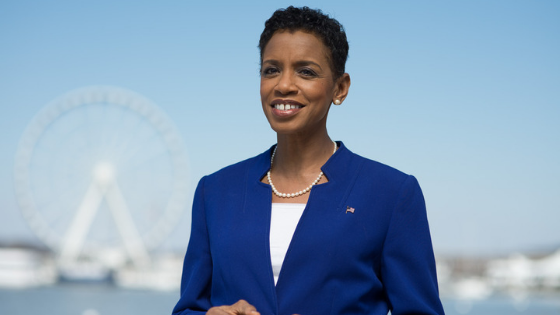 Our BlackHer Shero of the Week is former Congresswoman Donna Edwards.  Edwards was the first African American woman to represent Maryland in the U.S. Congress.  Before joining Congress, Edwards served as the executive director of the Arca Foundation, a private grantmaking foundation dedicated to advancing equity, justice, and human rights.  Earlier in her career, she was the first executive director for the National Network to End Domestic Violence.

Edwards is now serving as the national co-chair of Health Care Voter, a campaign to “hold elected officials accountable and support those who fight to protect our care.”

We spoke to her about her passion for making health care affordable for, and accessible to, all U.S. families.

Jocelyn: What is a health care voter?

Donna: In 2018, during the midterm elections, we saw that for millions of Americans, healthcare is a top policy priority. Far too many families are spending more of their money on medical bills and prescription drugs than anything else.  And they’re realizing that they should be getting more for their money.

A health care voter is someone/anyone who wants to address the crisis of health care in our country.

When I first ran for Congress in 2006 even before Obamacare, I was talking about the high costs of health care all the time.  Because of my own health care crisis, I became aware of the burden too many families were experiencing.

When I was newly separated from my now ex-husband, I lost my healthcare coverage, which he was carrying for our family.  I started a new job which provided health care, but there was a 90-day waiting period before it kicked in.

I rarely get sick, but during this 90-day period, I got a bad cold, which turned into a major respiratory illness.  One day, while I was in the grocery store, I passed out and was rushed to the emergency room.  The doctors made me well but that visit to the ER also made me broke.

My medical bills, coupled with my significant student loan debt, created a situation where I eventually lost my home.  It was enormously stressful.

Eventually, I paid off the health care bills but there was a huge opportunity cost.  For example, I was not able to put this money into personal savings.

Jocelyn: Wow!  That’s a hard story.  Unfortunately, I don’t think your experience is an anomaly.  I’ve heard that health care crises are one of the leading causes of bankruptcy.

Donna: You’re right.  If I had gone to the doctor and purchased a $20 prescription for antibiotics, I wouldn’t have gone into extreme debt.  That’s how I became a health care voter.

While in Congress, I did not serve on the health care committees, but I was very engaged with health care issues.  For example, I helped identify a problem in the Affordable Care Act, which included oversight of insurance companies.

Let’s fast forward to June 2016.  I was diagnosed with multiple sclerosis while in Congress.  It’s been quite a journey and I’ve learned even more about our health care system.  I had great insurance while I was serving in Congress.  I was put on a medication protocol that was very expensive and was covered.

When I left Congress in January 2017, I had to look to the private insurance market to address my needs, like so many other Americans.  I make too much money to qualify for a subsidy and I’m not old enough to qualify for Medicare.  There are pockets of people like me who are navigating the private insurance market.  We’re juggling premiums and paying for expensive medications.  I’m lucky that I have the income to pay for insurance, but others can’t and are forced into bankruptcy.  It doesn’t have to be this way.

Jocelyn: The whole situation seems crazy.  Black women know that healthcare costs are killing us.  I don’t think we need any more convincing that we have a real problem.  The question is, what can we do?

Donna: I joined Health Care Voter in 2018 to ensure that fixing health care was top of mind for all Americans.  We need to do the same thing in 2020.

I encourage folks to become health care voters.  You can take our campaign pledge and share your story.

Next, we need to elect leaders who will put everything on the line to change our health care system.

Regardless of party affiliation, it is hard to make big changes in health care today because the health care insurance complex is so powerful and is funding Republican and Democratic candidates.  Thus, for many elected leaders, the incentive to make big and bold changes is not there.

Also, health care is not an easy problem to solve.  There are lots of moving parts.  For example, we have too few primary care physicians in our country.  Medical school is enormously expensive, and graduates go into high-cost specialties vs. primary care to make money and pay their loans.  That means that people get sicker and instead of going to a primary care physician, they end up seeing a cardiologist.

We also have a nursing shortage which contributes to the problem.  With too few nurses, folks end up seeing medical doctors and that costs more.

Finally, there is the issue of drug costs.  The fact is that drugs made by the same company with the same formulation can cost $7K in Europe and $70K in the United States.

One of the campaigns we’re working on now at Health Care Voter is called Affordable Insulin Now.

Jocelyn: Ugh.  It does seem to all come down to greed.  What else can Black women do to help reform the system?

Donna: Demand that candidates at every level of government make things better. We forget about the power of our local representatives.  But local officials have a lot of power.  For example, they can authorize the placement of hospitals.

Second, we want all voters to examine the campaign finance records of candidates.  That means answering the question, “who funds this candidate?”  If we follow the money it will help us to understand how bold or reticent any candidate will be in standing up to the drug companies and the “donor class.”

Finally, after elections, we must hold our elected officials accountable to their campaign promises.

Jocelyn: How do we do that?  Often, I feel like we lose momentum after voting.

Donna: I’ll be honest, online petitions don’t work.  It’s much better if you send me a letter.  Tell me your name, address, and why you are a health care voter.  Share your personal story and experience.  Letters like this make a difference.  Your representatives want to hear directly from you about how health care affects you.

Also, visit us.  The offices of elected officials aren’t museums!  When you do come to see us, come with an agenda and a plan and don’t be afraid or reluctant to speak with our staff members.  They are often the ones closest to the issues, who are writing the legislation.

Finally, when we hold town halls, please come.  I know that we are all busy. When my son was little and I was a single mom, the last thing on my list was to show up at a town hall after a long day. But I did show up and we all have to show up.  We can’t be too busy to show up for our lives.

Donna: Congresswoman Barbara Lee is my living shero.  I like being around women who are fearless, and Congresswoman Lee is not afraid.

I also love to remember and honor Congresswoman Shirley Chisholm.

Finally, Congresswoman Barbara Jordan was an amazing leader during the Watergate hearings.

Jocelyn: Let me ask you the miracle question.  You go to sleep tonight and wake up tomorrow and a year has passed, and a miracle has occurred for Black women.  What happened?

Donna: Donald Trump is out!

On Investing in Programs, Policy, and Power to Create Change: An Interview with Lisa Hamilton