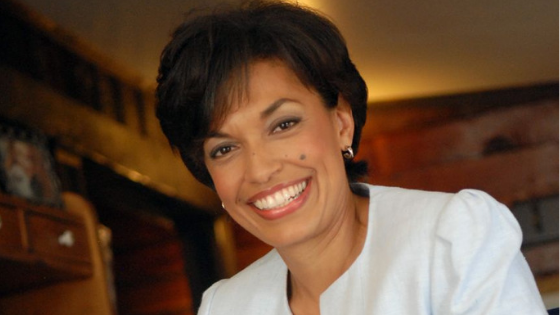 Our BlackHer Shero of the Week is Bonnie St. John. St. John’s leg was amputated when she was only 5 years old. Despite this obstacle, she became the first African-American to win medals in Winter Olympic competition, when she took home a silver and two bronze medals at the 1984 Winter Paralympics in Innsbruck, Austria as a skier. In recognition of her historic achievement, St. John was quoted on millions of Starbucks coffee cups and was honored with her portrait in the Main Hall of Trinity College at Oxford as a distinguished alumna.

Today, St. John is a best-selling author, a sought after corporate and motivational speaker and a corporate consultant.  She is working to help more women of color succeed in corporate America as the CEO of Blue Circle Leadership Institute. Check out all that she has done, and is doing here.  She has been recognized as an inspiring person and gifted leader by, among other folks, President George W. Bush (43). We agree! Read on.

Angela:  You were the first African-American to win medals in the Winter Olympic competition at the 1984 Winter Paralympics in Innsbruck, Austria. How did you get into skiing as an amputee? It seems like a metaphor for your whole life.

Bonnie:  A friend invited me to go on a ski trip with her family when I was in high school. My family had very little, but I was bussed into an affluent community in San Diego: La Jolla.  I really wanted to go with her family.  However, to ski, I had to find equipment for amputees. In doing that, I ended up getting involved in an amputee ski group. I became a very good skier and started skiing competitively.

For me, it was and is all about not being closed off. First, I had to realize that I could ski with the right equipment, and that realization grew on itself. “Oh wait, I can ski. Oh wait, I can race. Then, I can be one of the best!”  It’s about taking risks! We all must allow ourselves to get out of our comfort zones. That’s part of what you need to do to succeed in corporate America.  Working through lunch isn’t enough: take on new challenges and show yourself that you can do it.

Angela:  Your accomplishments did not end at the Olympics. Can you tell us about your background, and how you ended up creating a virtual leadership development program to help women of color succeed in corporate America?

Bonnie:  I had a lot of success as an Olympic skier by the time I was 17 years old.  That was my first experience with public recognition which led to making a lot of speeches and being seen as a representative of disabled people. Then I went to Harvard and when I graduated, to Trinity College, Oxford on a Rhodes Scholarship. I spent several years at Oxford and earned an MLitt. degree in economics.

I worked in the White House during the Clinton administration as a Director for the National Economic Council. I also spent some time working on Wall Street.

Before long, I was writing books about success in business and in life. I also started doing some consulting on leadership, teambuilding, and diversity.  When I talked with business executives they often asked for advice on why so many multicultural women left corporate jobs? and didn’t advance to leadership. The corporations asked me for solutions, but I kept thinking I was too small to address the problem. I tried to partner with bigger consulting companies and highly-esteemed nonprofits, but I couldn’t seem to get them to focus intensely on women of color. I decided that I needed to take it on with my own small company. If the one-legged Black woman whom the President honored, didn’t tackle the issue head-on, who would?

Angela: So, your consulting practice got very specific? You started to focus on working with corporations to help women of color get ahead?

Bonnie: Yes, we did! I work in partnership on this business with my husband Allen Haines, who has extensive experience with the corporate world as a CEO; he’s won awards for promoting women in the workplace. He helps ensure that our solutions engage the white, male, executives, too.  Enlisting male allies is crucial to our success in the business world.  We can’t transform corporate America alone.

Around four years ago, Allen and I started talking to corporations and their diversity officers.  We asked them what a good development program for women of color could look like. They talked about personal coaches—who are great—but they are very expensive. We wouldn’t be able to move the needle for women in larger numbers, earlier in their careers when it matters.

We wanted a solution that was lower cost and scalable. What we’ve created is a virtual program.  We give women information on the unwritten rules for informal relationships, influence, selling your ideas, and enlisting powerful advocates.  They take action, share their successes each month, and make incredible strides.  One company has measured that our participants are 3.5x as likely to be promoted as their peers!

No one talks about the fact that there are too few women of color succeeding in the corporate world. People talk about race and they talk about gender, but many folks just don’t realize that women of color face double headwinds. The result is that multi-cultural women are not making the same advances as white women.  I am so proud that our company is helping to address the problem and helping women and corporations to talk about these issues. And we do train the (mostly male) leaders to advocate for women of color in addition to assisting the women!

Our methods work. We have worked with over 800 women so far. The number of women of color who are advancing in the businesses with whom we work is increasing. We are already working with major corporations like American Express, Aetna, Bank of America, and JPMorgan Chase. Ultimately, we will reach thousands of women and companies with our scalable, virtual programs.

Angela:  This is fantastic! But then, so is your extraordinary life! You have written 7 books and are a favorite corporate speaker. You were honored by George W. Bush during Black History Month as a role model, leader, and extraordinary person, and you have met the Dalai Lama. Finally, you have been featured on Starbucks cups.  How did all this happen?

Bonnie: To me, my life is like the Forrest Gump movie!  As a child, I had the same brace Forrest had in the movie until my leg was amputated. Now my life is so unreal. I have been honored by several Presidents, won Olympic ski medals, traveled to more than a dozen countries, and even been quoted on a Starbucks Cup. Today my portrait hangs in the halls of Oxford as a distinguished alumna, which even I find hard to believe!

I met the Dalai Lama when I was working for a wellness conference that was hosted in India.  As part of the team, I got to meet him.  He saw my artificial leg and he said “no pain” – he has pain in his knee – and he was laughing.  Years ago, I made a decision to remove the cosmetic sheath over my prosthetic leg and expose it clearly. I love that people see it and comment on it. Experiences like that would not have happened with a covered-up prosthetic, yet it took me a long time to get to the point where I accepted my prosthetic as an amazing machine, not a fake leg.  I would rather have a leg that looks like a robot than put fake-looking skin on it. To me the “robot leg” is more authentic; I believe that my authenticity is part of the reason why I am successful.

Here’s another way to say it: I have been in the spotlight since I was 17 as a role model for disabled people, African Americans and others. However, being a role model doesn’t just mean accomplishing things; it means making yourself available to help others break through.  I chose to pursue this career where I am always putting myself out there with articles like this one, speeches, and books to make myself self available to more people. I could have been an economist, or a lawyer, or any number of other things. I like helping others break through to leverage themselves for success.

Angela:     Can you tell us about your latest book, Micro-Resilience?

Bonnie My husband and I co-wrote this book.  We started working on it in 2011. It stems from research by Jim Loehr who asked the question, “Why are certain tennis players consistently winning? Many players are world class, but only a few are consistently winning.”

Loehr could not understand what defined the most successful players until he looked at what these players did between the volleys. They recovered energy better between points. In Micro-Resilience we take this “between the points” notion and apply it to everyday lives – particularly with regard to high performance.  We present research-based tools and techniques to recover mental, spiritual and emotional energy during long and busy days.  Recovering your energy enhances your skills and strengthens your ability to combat the stresses and strains of modern life with grace and ease.

We created a platform for the book, and now thousands of people have been through the Micro-Resilience training; it has helped them immensely.  The book has been translated into several languages, including Japanese and Chinese.

Angela: It’s time for the miracle question: You wake up a year from now in April 2020. A miracle has occurred for Black women.  What happened?

Bonnie: I have devoted my whole life to helping people reach their potential.  For me, the miracle happens when we, Black women, are able to achieve our full potential.  We wake up and there are 10 Black women CEOs in the Fortune 100. That would be so impactful for the world!