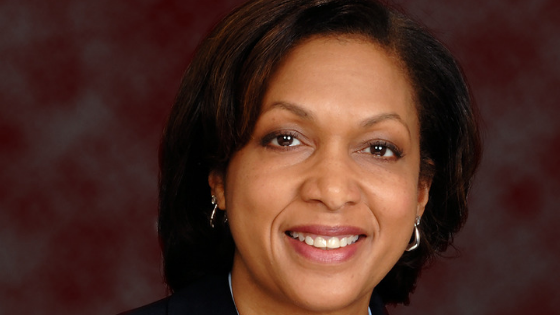 Our BlackHer Shero of the Week is Sylvia Stein, vice president, general counsel and corporate secretary of Modine Manufacturing Company, a multi-national $2 billion publicly-traded company, which operates in North America, South America, Europe and Asia.  As general counsel and corporate secretary, Stein leads Modine’s global legal team and serves as counsel to Modine’s executive team and board of directors.

Angela:  Sylvia, you are a general counsel at a public company; not many black women have this job. Can you tell us about your career?

Sylvia: I was born and raised in Detroit, Michigan. I attended Northwestern University as an undergraduate. Directly after that, I attended the University of Michigan Law School. After law school, I was a law clerk for the incredible Judge Ann Claire Williams in the United States District Court in the Northern District of Illinois, in Chicago, Illinois.  After clerking, I went to Latham and Watkins, where I was an associate in the commercial litigation practice. I left Latham to join Kraft Foods.  I was there for 16 years and served as chief counsel to various business divisions, and ultimately became associate general counsel. After Kraft, I joined Modine, where I am the general counsel.

Angela: Please tell us what Modine does.

Sylvia: Modine is an international, publicly-traded company located in Racine, Wisconsin. We make thermal management heating and cooling products and systems and components for the automotive and industrial industry.  In short, we cool your car engine and battery!  We also create office heating and cooling units (HVAC systems).

Last year, Modine generated $2.1 billion in revenue. We have just under 12,000 employees worldwide, and operations throughout the world.

Angela:  What does the general counsel or “GC” at a public company do?

Sylvia: GCs are a corporation’s chief legal officer, meaning that I run Modine’s legal department. I have a team of 13 including lawyers, paralegals, patent experts and support staff.

As GC, I am involved in a lot of legal issues that I would call “standard business issues” – significant litigation, leases, contracts, general corporate matters, etc. Since Modine is a public company, I also make sure that we make all the appropriate disclosures to our key stakeholders, including the government, stockholders, and the public.

Finally, I’m responsible for global legal compliance matters and matters of intellectual property.  I provide advice and counsel to the management team on business issues and strategy and support the board of directors and its attendant committees on corporate governance.

Angela: At BlackHer we often talk about how Black women must strive to attain personal, political and economic power and recognize when we have it. Are GCs powerful? How can we tell?

Sylvia: There are a lot of articles about the changing role of the GC.  There used to be a perception that in-house counsel were merely managers of outside lawyers.  Now, more and more articles tout the “changing role” of the GC as counselor, key business leader and ethical corporate watchdog.  We ensure that products, boards, and management teams are following the law.  Because of our expertise, we are key members of the executive decision-making team at major companies that help to make this country strong. We have a seat at the table, meaning that we can make our values heard as they relate to running a corporation.  So, on that level, yes, GCs of public corporations are powerful. We serve an important role in business and in society.

Angela: It sounds like a great job. You can get paid well, do interesting work and influence outcomes in corporate America. From what I have read though, not many Black women hold the GC position at public corporations. Are many Black women GCs?

Sylvia: It is a good job, and no, not many Black women hold my position, but I do think that more Black women are pursuing the role.   Certainly, there are a lot of us who could do well as GCs.

Angela. As a general counsel, you control legal spend and, at times, decide which law firm your company will work with. Is it important to you to work with diverse lawyers?

Sylvia: It is important.  There are articles and studies that show that diverse teams get better results; the same is true for lawyers.

Also, I am a woman of color, so this is an issue that I personally care about and am committed to. The number of lawyers who are Black women or people of color is surprisingly low, given that it’s 2019.  Black people comprise only 5% of lawyers in the U.S, meaning that an even smaller percentage of U.S. lawyers are Black women.  To help to address this, I work with organizations like Just the Beginning.  They are building the pipeline of people of color going to law school so that there will be more of us in the future.

In my GC role, I hire firms to represent Modine.  I ask about their levels of diversity, and it matters what the answer is. Firms have turned me off by saying that they don’t think about diversity, equity, and inclusion issues or know how many lawyers of color they employ.

Ignoring the issue sets the wrong tone for me.   At a minimum, the firms I work with must acknowledge the importance of having partners and members who are lawyers of color. Also, just as I did at Kraft, I instruct the law firms that I hire that I care about this issue and want people of color working on our matters when appropriate and possible.

I always have a meaningful conversation about diversity with the law firms that I work with. Is the firm committed to diversity and inclusion?  How do you show that? Whether the GC you are soliciting for business is a Black woman or not, what role does diversity play when you are staffing a case? If you don’t have a person of color to work on my matter, why is that? Is the right person busy on other matters or is there no one? Having this discussion is not a mandate to hire someone or to take some other action, but if you want to do business with me, we have the discussion.  I believe that diverse staffing will become the norm and we will change the world faster, if more of us have this discussion.

Angela:  Lawyers have asked corporations to withhold business from firms that are not committed to diversity for years.  It’s different now because there are more diverse in-house lawyers controlling the purse.  So, the plea is not falling on deaf ears.  We seem to be making some traction on diversity, but the process is slow.  As you know, less than 1% of partners at major law firms are African-American women. Given this fact, is law a good profession for Black women?

Sylvia: I think it’s a good profession for the right Black woman. You must know why you want to be a lawyer, and, in my opinion, you should be motivated by practicing law.  Before you become a lawyer, ask these questions: What does the legal profession mean to you, and why do you want to join it?  Having a law degree is not a guarantee of money, prestige, fame, job satisfaction, respect, or anything else.

That said, law can be a great profession.  It’s interesting and it’s a launching pad for so many other careers: being a corporate lawyer, prosecutor, public defender, politician or judge.

You must know going in that there is more to be done to move the profession forward with respect to diversity, equity, and inclusion, so that more great lawyers of both sexes and all races get real opportunity to achieve their full potential. Change won’t happen if more Black women and other people of color who love the law don’t join the profession.

Angela: It’s time for the miracle question.  You wake up and it’s January 2020. Everything has changed for Black women. What happened?

Sylvia: The systemic racial and sexual barriers that hold Black women back no longer exist, meaning peoples’ minds have opened and we are valued the same as anyone else in the American workforce. When I go to business meetings, I am not the only Black woman in a high-level position in the room.  Overall, we have higher levels of participation in boardrooms, as board members and as CEOs.

More importantly, Black women everywhere are in a healthy place both physically and emotionally.  We are educated and fully-employed in decent and good paying jobs.

In the miraculous year 2020, we don’t read any more stories about how “Jill Jones” is the first Black woman to do anything. Being first is no longer a reality for us – we’ve already arrived.