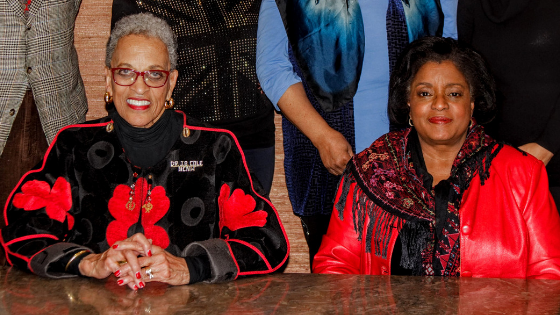 Our BlackHer Sheroes of the Week are Dr. Johnnetta Cole and Janice Mathis, Esq. aka “Dr. C” and “Sister ED,” president and chair of the board and executive director of the National Council of Negro Women (NCNW), respectively.  Dr. Cole was the first female African-American president of Spelman College serving from 1987 – 1997.  She was president of Bennett College from 2002 – 2007.  From 2009 – 2017, she was director of the Smithsonian Institution’s National Museum of African Art.  Dr. Cole joins NCNW as their 7th National President.  Ms. Mathis joined NCNW as executive director in 2016.  Previously, she served as vice president for legal affairs for the Rainbow PUSH Coalition led by Reverend Jesse L. Jackson, Sr.

The National Council of Negro Women is the country’s largest civic “organization of organizations” for Black women.  They have 200 community-based sections, 78 sections on college campuses and 32 national women’s organizations. They serve over 2 million Black women from Massachusetts to Texas.  You do not have to have a college degree to be part of their ranks, unlike other organizations that serve Black women, they are not exclusive.

NCNW was founded in 1935 by Dr. Mary McLeod Bethune.  Dr. Cole and Ms. Mathis follow the footsteps of Dr. Dorothy Height, who passed in 2010 after leading the organization for 40 years!  She was followed by Dr. Barbara Shaw and subsequently Ingrid Saunders Jones, who served as its president and chair of the board from 2012 – 2018.

According to its leadership, NCNW is “alive, well, and solvent and ready for the future!”

Below is text from a media avail that I attended in early December.

Janice: We’re thrilled to have Dr. Johnnetta Cole as our new president and chair of the board.  There are only two colleges in the U.S. serving Black women and she’s led them both.  She also served as director of the Smithsonian Institution’s National Museum of African Art.

Before we hear her vision for NCNW, I’d like to share more about NCNW’s program priorities for the year.

First, we promote education with a special focus on science, technology, engineering, and math—STEAM.

Second, we promote entrepreneurship and encourage Black women to become business owners. In 2018, we provided training and counseling via free webinars to over 15K women and we awarded $5K to aspiring entrepreneurs at the first Millennial Entrepreneurs (ME!) Pitch Competition during our national conference on November 9, 2018.

Third, we educate women about good health and HIV/AIDS prevention.  We are happy to note that Black women’s rates of HIV infection are down.

Fourth, while we don’t have lobbyists in Washington, D.C., we work with our membership to enhance our civic engagement and advocate for public policies that promote our values.  For example, we helped secure a $58 million appropriation for Clean Water for Flint.  We also worked to expand the Child Tax Credit and make it refundable so that more taxpayers can access it.  Our other policy priorities include passing sensible gun legislation, expanding internet access and protecting our privacy on the internet. In 2016, approximately 39 percent of children ages 3 – 18 didn’t have internet access at home.

Now, I’d like to introduce you to a woman who needs no introduction – Dr. Johnnetta Cole.

It is an immense privilege to walk into a leadership role in any organization but especially this one. NCNW knows her history and her story! The organization was founded by Dr. Mary McLeod Bethune in 1935.  I am proud to say that Dr. Bethune was one of my mentors.  The organization was also led by the inimitable Dr. Dorothy Irene Height for 50 years!

I’m honored to become the board chair and 7th National President.

While you’ll want to know my vision for the future of NCNW, I’d prefer to spend my early days learning, observing and participating before speaking.

But to run for this office and get elected, I had to say something.

NCNW will celebrate her 85th anniversary in 2020.  In my view, an organization that has survived since 1935 doesn’t need a lot of change.  However, we are going to modernize the way that we communicate.

First, I’d like to see NCNW become even more intergenerational.

Second, we’ve worked on civil and gender rights for over eight decades.  But we haven’t always been at the table where we need to be.

Going forward, NCNW will be at all the tables we can be at when social issues are at hand.  As Congresswoman Shirley Chisholm was fond of saying, “If they don’t give you a seat at the table, bring a folding chair”!

And as Dr. Bethune said, “If we have the courage and tenacity of our forbearers who stood firmly like a rock against the lash of slavery, we shall find a way to do for our day what they did for theirs.”

To learn more about NCNW and become a member, visit http://ncnw.org/members/join.