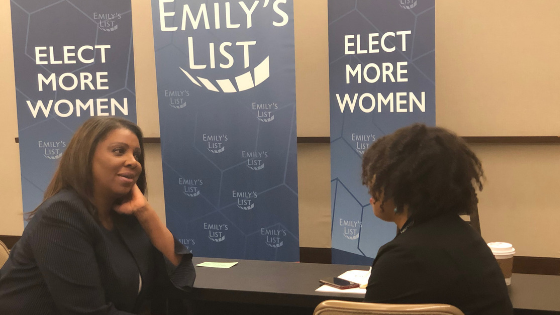 For the past 34 years, EMILY’s List has been investing in pro-choice Democratic women running for office across America. The organization is not named for a person but is instead based on a fundraising principle. It is an acronym for “Early Money Is Like Yeast,” which founder Ellen Malcolm has said: “makes the dough grow.” In other words, when political candidates receive donations early in a race, it can lead to big money in the future. Raising money for progressive women candidates is work that the organization undertakes with the utmost seriousness. In its three-plus decade history, EMILY’s List raised over $600 million for candidates at the state, local and federal level.  And 40% of the candidates that the organization has helped elect to Congress have been women of color.

On Thursday, April 4th, EMILY’s List held its annual We Are EMILY Conference and gala in Washington, DC. This year was all about celebrating the historic 2017-2018 midterm cycle, which resulted in record numbers of women being elected. I was fortunate to attend and hear from some of the rising stars in Democratic politics.

One of the women I was able to spend some time with at the conference is New York Attorney General Letitia James who was there to speak on a panel about statewide elections and the current political climate. She has been affectionately dubbed the “Guardian of the Galaxy” by Angela, who wrote in January about having high hopes for James to end corruption in business and government during her tenure—specifically through investigating Donald Trump in 2019. When I told Attorney General James about this, she laughed and joked that she loved the title and that all she needed was a magic wand to match! Unfortunately, she didn’t share much about her plans to take on Trump’s corruption. But here’s what I did learn from her:

“What keeps me going are the women I see every week in my church on Sunday, with lines on their faces and heavy hearts. Brothers on the corner who say ‘Hey Tish, what’s up?’ and those who are missing because they are incarcerated…Little children who jump rope in front of my house who dream big and jump because they want to touch the sky. I’m their Auntie Tish and I’m their protector.”

“I want to thank you…for telling our story and for connecting the dots. So from one dot to another, God bless you!”

When running for attorney general, James’ slogan was “the people’s lawyer.” After meeting her in person, I can definitely attest to that being true. She is guided by a sense of purpose, justice and deep compassion that is incredibly rare in a politician today. I’m inspired by “Auntie Tish” and thrilled that the people of New York were wise enough to choose her to use her powers for good.

Because Leaning in Doesn’t Work for Black Women: An Interview with Minda Harts