On Telling Our Own Authentic Stories: An Interview With Angela Tucker

Our BlackHer Shero of the Week is Angela Tucker, founder/president of TuckerGurl, Inc, a film production company.  Tucker is passionate about telling compelling and irreverent stories about underrepresented communities.

I talked to her about All Skinfolk, Ain’t Kinfolk, her new film about the 2017 runoff between Desirée Charbonnet and LaToya Cantrell for the first female mayor of New Orleans.

Before we talk about your work, tell us how you became a filmmaker/documentarian?

I consider myself a filmmaker because I create films in both fiction and documentary format.  Also, it’s just easier to say filmmaker vs. documentarian. 🙂

If I go way, way, way back, originally I wanted to be an actor.  I took acting classes in high school and college.  But I kept coming up against the fact that I’m Black, I’m 6’1” and folks were like “I don’t know what to do with you.”  There were barely any parts for Black people.  I wanted work to exist that I could be part of.

I got into directing by directing plays at first.  But after college, I wanted the ability to make work that could be seen by more people; that’s how I got interested in film.

Documentaries are interesting to me because I’ve been politically active and involved since I was a teen.  I realized I could direct work and be politically engaged through documentaries.

What would you tell a young (or old!) woman who wants to get involved in filmmaking?

Learn the craft of filmmaking.  I went to film school but you don’t have to.  However, it is important to look at what other films are out there and take the time to determine what you want to say and the best format in which to say it.

There are creative decisions you make before you go out and start shooting. As you get into it, you may learn that you know a lot less about your story than you think.

I thought a lot about the best format for the story I wanted to tell in All Skinfolk, Ain’t Kinfolk.

I love the poster for All Skinfolk, Ain’t Kinfolk.  What does it represent? 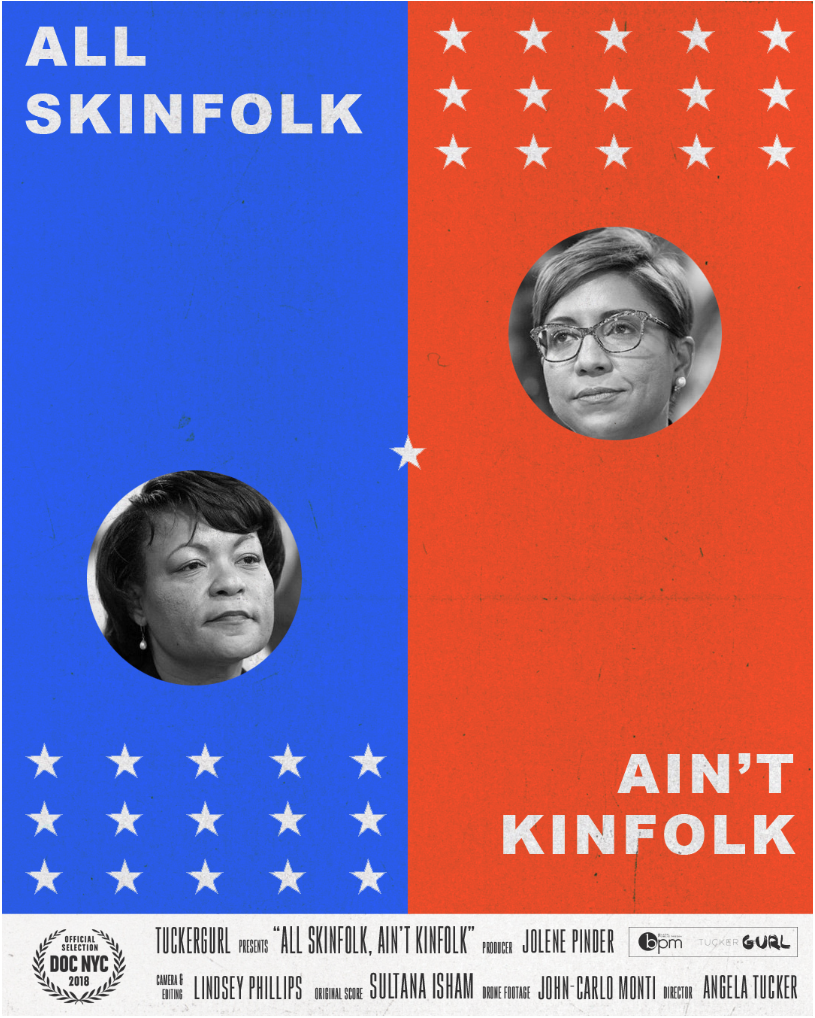 We went with the visual of the flag and the red and blue of the two political parties, even though both women are Democrats, because we wanted to play up the way that the media portrayed this race. And how pundits put people into boxes even if the boxes don’t fit.

I see the film as a “bait and switch”.  You think it’s going to be a film about an election but it’s really a larger statement on Black female voters and where we sit in the political process.

This election was an example of the fact that we can’t rely on the media to inform us.  We have to sort through and figure out where politicians stand on the issues and which issues matter most to us.  We have to create space to figure out whom to vote for and who should represent us.

You’ve said that the media had no playbook for covering this race.  What does that mean?

Folks have a lot of assumptions about Black women’s political beliefs.  They put us in a box, e.g. Black women all care about criminal justice reform.  But they couldn’t do that in this race because there were two Black women running against each other.

Fascinating.  So what happened?

It was interesting to watch how the media used racial and gender stereotypes to make the race more exciting.  For example, early in the film, we show a clip from the debate where one of the candidates, Michael Bagneris is commenting on the run-off candidates and he says,

“LaToya is a good mother.  Desirée has great shoes.”

This became a trope for describing LaToya as down-home and down-to-earth while casting Desiree as well-dressed and well-heeled.

They used these gendered stereotypes to create conflict.

Were Black women journalists covering the race?  Did they do any better?

There are newscasters in New Orleans who are Black women and they were reporting the story as well as they could. You could watch the debates and see the ads.  But there was not a lot of coverage of their actual platforms. Black women had to get that information in other ways, essentially by talking to each other.

As you know, several Black women are being vetted by the Biden campaign to be the next vice president of the United States.  Did you learn anything from your film that could inform that process?

We don’t have an opportunity to choose in the VP race and there are so many factors that we don’t have any control over.  My sense is that the campaign will choose someone super out of left field.  Also, I’m not dying for any Black woman that can make real changes to be in that position.

I hear you.  For example, I’d hate to see someone like Stacey Abrams in such an anemic role.  Is there anything else you’d like to share with us?

I hope that more Black women and girls feel empowered to tell their stories through media instead of relying on gatekeepers to make that happen.  You can make something and just put it out there.

There is a hunger now for authentic stories and authentic storytellers. If you are in the headspace, this is an incredible time to be creative.

I’d also say that, in addition to telling our own stories, I hope Black women shift our ideas around success.  A lot of us go into film or the creative arts because of this idea around wanting to be famous.  But what does that mean?  Success can also mean doing work that means something to you and sharing that with the world.

Amen. I needed to hear that today. Is it possible to do authentic work and make money?

Directing Skinfolk was not a lucrative project.  But I’m lucky that I haven’t had to do anything totally outside of my field to make money.  I’ve worked on PSA’s and commercials as well as feature-length films and documentaries.  I do work that makes money and work that is authentic and feels right to me.  That’s the balance.

I’m obsessed with Barbara Jordan right now.  She was the first Southern Black woman elected to the House of Representatives.  We included an excerpt from her in the film.  I’m reading her autobiography, Barbara Jordan: A Self Portrait.

Erykah Badu intrigues me especially ever since she and Jill Scott had that Instagram Live battle.  I’m attracted to people who are 100 percent themselves and don’t care what others think.

Dorothy Roberts is also a shero.  We interviewed her for a documentary about women who were forcibly sterilized in California prisons.  Her book is called, Killing the Black Body: Race, Reproduction, and the Meaning of Liberty.  You can also check out her TED Talk, The Problem With Race-Based Medicine.

Let me ask you the miracle question.  You go to sleep tonight and wake up tomorrow and it’s June 2021 and a miracle has occurred for Black women.  What happened?

We are paid equally to white men.

P.S.  Watch “All Skinfolk, Ain’t Kinfolk” and participate in the first Skinfolk Salon to discuss the movie on Tuesday, June 30th 7pm EST.