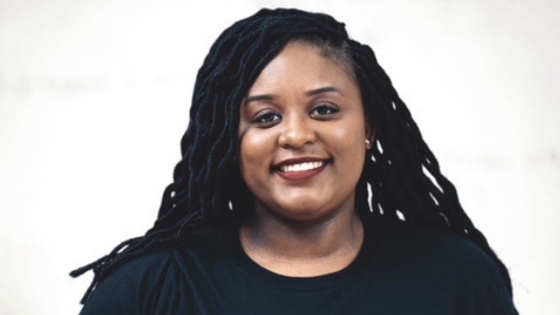 Our BlackHer Shero of the Week is Chelsea Brown, a graduate student at The University of Maryland’s School of Public Policy and the logistics manager for The Young, Black & Giving Back Institute. Brown created the Chelsea Brown Scholarship at her alma mater, Winthrop University and became the youngest person to serve on the board of directors of the Winthrop University Foundation.

Jocelyn: How do you define philanthropy?

Chelsea: For me, philanthropy is about connections and awareness. One reason to be philanthropic is to help build awareness of causes and issues that people need to know about. Some people assume that you must have millions to give but that’s not true. The monetary part of philanthropy has no requirements or boundaries. The point of philanthropy is to connect with each other.

Jocelyn: How did you get into philanthropy?

Chelsea: I was researching graduate schools and looking for a program focused on fundraising and nonprofits.  I learned about Ebonie Johnson Cooper, a former professor at Georgetown and the founder of The Young, Black & Giving Back Institute (YBGB). I reached out to her for an informational interview and after we met, I had a role at YBGB. That was two years ago. Now, I am the logistics lead for the organization.

Jocelyn: What does YBGB do?

Chelsea: Our mission is to educate, inspire, and empower young Black professionals, influencers, social entrepreneurs, and activists to effectively invest in changing their communities through philanthropy. We created Giving Black Day, an annual giving day on Aug. 28 to “promote financial support for Black-led and Black-benefiting grassroots organizations.” Aug. 28 is an important date in history. On Aug. 28, 1955, Emmett Till was brutally murdered. On Aug. 28, 1963, Dr. Martin Luther King, Jr. delivered his famous “I Have a Dream” speech. On Aug. 28, 2005, Hurricane Katrina made landfall in Louisiana. On Aug. 28, 2008, then-Senator Barack Obama accepted the Democratic nomination for president, becoming the first Black man to ever win the nomination.

Our goal is to increase giving to Black-led and Black-benefitting nonprofits. ABFE: A Philanthropic Partnership for Black Communities defines Black-led social change organizations as “those with predominantly Black boards and executive leadership, staff leadership, and constituents — if relevant — and whose primary organizational purpose is to work to build the political, economic and/or social power of the Black community. So, “Black-led” is about the demographic makeup and racial identity of the leadership as well as a political purpose of building power to ensure that the Black community thrives.”

You can learn more about Giving Black Day in this video featuring Issa Rae!

Jocelyn: What’s a bright spot in philanthropy or the causes you care about?

Chelsea: I loved seeing Robert F. Smith’s recent gift to the young men of Morehouse to pay off their student loans. In addition to raising awareness about the role of philanthropy in education, this gift will enable these young men to choose their careers based on their passions versus their bank accounts. I hope that other philanthropists follow suit and that Smith’s giving spurs more conversation about the crisis of student loan debt. I also love that through his giving, Smith is educating and inspiring young Black men to pay it forward.

We want millennials to know that you don’t have to have a million-dollar network to be a philanthropist. I hope that big moves like this will encourage others to make smaller moves. For example, many folks can start $2,000 scholarships at their alma maters to benefit a future student.

I think there is a lot of philanthropic potential in alumni networks that goes untapped. I don’t think that alumni associations are doing enough to engage millennials of color in giving. Many predominantly white institutions cultivate white and older men to be donors and board members. They aren’t leveraging younger alumni and alumni of color. Our schools don’t think of us as givers and often we don’t think of ourselves as philanthropists either.

But we are giving! For example, many of us tithe in our churches.

We need to ask this question, “what is it that Black students and alumni need in order to stay engaged with their post-secondary institutions and become funders?”

I think it will help when colleges and universities do more to make us feel heard, valued and involved during school and after graduation. They also need to change their fundraising “pitch.” For example, instead of focusing on tax breaks as a rationale for giving, it’s important to tell millennials about the purpose of giving. Lead with “the why.”

Jocelyn: Who are your philanthropic sheroes?

Chelsea: I learned a lot from Anna Barber, founder and principal consultant at Barber & Associates.  She served as the senior manager gifts officer for the Smithsonian National Museum of African American History and Culture.

And, of course, Ebonie Johnson Cooper is my mentor. I’ve learned a lot from watching her fundraise.  As a young Black woman in philanthropy, she has helped me have my own voice and not be intimidated by funders.

Chelsea: The Young, Black, and Giving Back Institute is powerful!

The energy and passion that young Black people have for giving is outstanding as are the connections we are making with each other.

We are the people who need to be on your boards of directors. I hope that more folks will mentor us and lead the way for those of us who want to be in philanthropy. Because philanthropy needs more Black people making decisions about how to invest in communities to change the world.

When We Fight, We Win!