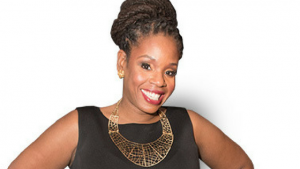 This week we were thrilled to catch up with Glynda C. Carr, co-founder of Higher Heights.  Higher Heights is the only national organization providing Black women with a political home exclusively dedicated to harnessing our power to elect Black women, influence elections, and advance progressive policies.

Jocelyn: Glynda, it is such a pleasure to finally meet you. So many folks have urged us to connect with you!  Let’s jump right in.  What makes your heart sing about this moment for Black women and what keeps you up at night?

Glynda: The good news is that progressives have finally realized what the data has been saying and what many Black women have always known – Black women are the best return on investment at the polls and on the ballot.

That said, Alabama was a tipping point for many to finally recognize our political power, including Black women, who are working to unleash our power to move this country to higher heights.

Jocelyn: Everyone that we’ve spoken to says that your organization, Higher Heights, was crucial to this success.

Glynda: We had a board meeting right after the Senate race and one of our board members said, we were built for this season.  The long hours and early commitments from our members, donors, and growing community are creating the environment for Black women to vote, run, and lead.

Glynda: Yes, and it is a remarkable time.  There are a record number of Black women running for office. We recently elected a Black Mayor named Keisha in Atlanta.  And, in Georgia, we are on our way to electing the first Black woman governor in the history of this country.

In addition to working to elect the first Black woman governor, we are supporting some amazing candidates this fall.  We hope your readers will learn more about these women, share their stories, and support them with their time, talent, and resources.

But regardless of what happens this fall, I’m excited about what this time means for my goddaughter.

I volunteered for the Stacey Abrams Campaign in advance of her primary.  My goddaughter, who lives in Georgia and proudly rocks two afro puffs, is inspired when she sees Stacey Abrams, a qualified candidate that looks like her. That means so much to me.

Jocelyn: That’s very sweet!  I hate to be a downer but what keeps you up at night?

Glynda: We’re living in one of the most politically toxic and racially divisive times.  While I’m excited for Stacey Abrams, I also worry about her safety as she goes door to door, meeting people across the state.

Many people are upset, and I worry that they may stay home this fall.

Also, while there are amazing Black women running up and down the ballot, we are still struggling to get the media coverage we need and deserve to reach more voters.

That said, it does feel like this is a full-circle moment and I am fueled by the possibilities.  It’s the 50th anniversary of Shirley Chisholm’s election to Congress. And the 24 million Black women in the U.S. are realizing that we have a real role to play in changing our democracy through our electoral, economic, and organizing power.

Jocelyn: What do you want BlackHer subscribers to know about your amazing organization, Higher Heights?

Glynda: That we are their political home.  We were looking at our logo the other day and it has steps in it.  And where do you find steps?  In homes.  We hope every Black woman, regardless of where she is on her civic engagement journey, will step into her leadership and our democracy by joining this rapidly growing #BlackWomenLead movement.

I also want your readers to know that like my mother and my grandmother, who always left an open seat at the dinner table, Higher Heights has an open seat at our table for our allies looking for ways to invest and support Black women’s political leadership.

We are a place where you will feel at home and can get politically informed, engaged and take action.

Jocelyn: Tell me about your programs and campaigns.

Glynda: We have programming to help Black women vote, run for office, and make their voices heard on the issues.

For Black women who are interested in running for office, we have #BlackWomenLead Political Leadership Webinar Series.

Research shows that Black women are often discouraged from running for office.  That’s why this training is in a webinar format.  Any woman can sign up and learn in private from the library or comfort of her own home.  Through the training, she’s also able to connect with like-minded women.  And she can attend this series for FREE!

Jocelyn: That is so great.

Glynda: For Black women voters, we have #BlackWomenVote.  This campaign is providing Black women the tools to prepare to vote and get their networks to the polls.

Jocelyn: Amen!  I love your What Are You Voting For? video!  And I hope all Black women will grab those #BlackWomenVote t-shirts!

Glynda: We also just released a video called Ain’t I A Woman? It’s inspired by the famous speech of the same name by Sojourner Truth.  The video features Senator Kamala Harris, Amanda Seales, Angela Rye, Rep. Yvette Clark and many more amazing Black women who talk about why they are politically engaged and what it means to be a Black woman.  Women can watch and upload videos to share their truths.

Being civically engaged is about raising your voice and telling your story.  We encourage all Black women to “Tell Your Truth, Cast Your Vote, and Show Your Power.”

Jocelyn: It’s fantastic!  We just uploaded it to the site and shared it with our readers!

Let’s change tack a bit.  August 7th was Black Women’s Equal Pay Day, where we recognized that Black women still face a huge wage disparity when compared to other demographics, especially white men.  As you know, 50 years after the passage of the Equal Pay Act, we still make 63 cents for every $1 a White man makes even after controlling for occupation. It’s infuriating.

Economic justice is a key issue for us and there are many more issues in our hearts and on our minds.  Let’s talk about this for a minute.  Increasing our representation at every level of government is so important.  And, at the end of the day, isn’t the end game to change public policy and pass progressive legislation?  How do you think about that?

Glynda: That’s right.  We are engaging Black women as voters, candidates, and influencers to build economically stable, safe and healthy communities.  That is the end game.  And one of the reasons we are so committed to encouraging Black women to vote is to ensure that we have leaders in place who will fight for us.  In addition, we seek to diversify leadership because data shows that diversity creates better governance.

But, you’re right, once candidates are in office, we must hold them accountable.  At Higher Heights, we seek to elect candidates who champion and advance progressive policies.

In fact, on October 2nd, we’ll be hosting a National Sister to Sister Salon to encourage Black women all over the country to come together wherever they are – on the couch, at the nail or hair salon – to engage in a night of collective power.

When you sign up you will receive a toolkit which gives women everything they need to hold these conversations.  We then ask the leaders to report back to us.

We want to hear directly from Black women.  What are the issues that keep them up at night and what are their proposed solutions?

Jocelyn: What a great opportunity to tap into the genius of Black women.

Glynda: Yes!  There was some great research in Nielsen’s 2017 report that talked about how Black women are trendsetters and influencers.  Again, at Higher Heights, we have known this for a long time.  But we’re not just influencers in fashion and beauty.  We are also making an imprint on the future of progressive politics.

Glynda: And we are organizers.  As we say, when you fire up a Black woman she does not go to the polls alone she brings her house, her block, her church, and sorority.

Jocelyn: Let me ask you the Miracle Question. You go to sleep tonight and wake up in the morning and it’s August 2019.  The miracle has occurred for Black women.  What happened?

Glynda: That makes me think of my great-grandmother, Carrie Lee Dickens.  She was born in 1895 and lived to be almost 100.  She had a third-grade education, had limited career opportunities, and did not have the right to vote for most of her life.  But she dreamt a big dream for my grandmother, mother and me.  She wanted us to be free of walls and ceilings that limited the possibilities for us to reach our full potential.

That’s how I feel about my goddaughter, who I talked about earlier.

The miracle is that we wake up and my goddaughter sees Black women leading, shattering glasses ceiling, and breaking down barriers.  So that she is free to truly step into and find her light.