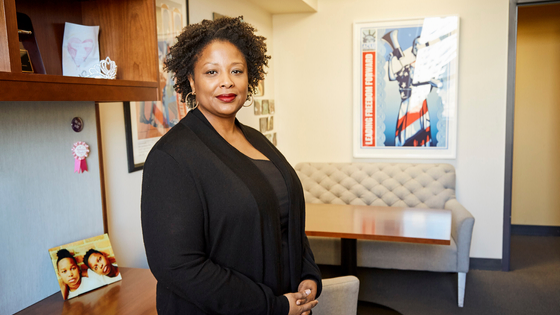 Our BlackHer Shero of the week is Deborah Archer, associate professor of clinical law, director of the Civil Rights Clinic at New York University (NYU) Law School, and co-faculty director of NYU’s Center on Race, Inequality, and the Law. Much of her scholarship focuses on criminal justice reform, education reform, and protection of civil rights.  Prior to joining NYU, Deborah was a professor of law at New York Law School (NYLS), where she led the Racial Justice Project, a legal advocacy initiative that works to advance racial justice and civil rights.

I come from a large, loving Jamaican family. My mother is the oldest of five children and my father has two brothers. My parents were immigrants to the U.S. I have a brother and a sister. They are all incredibly supportive and are a big reason I have been able to achieve so many of my dreams.

I am also married with two incredibly beautiful, smart, wonderful sons. Being the mother of two young, Black boys and raising them in America motivates so much of my work around racial justice. It may sound corny, but I do want to help make this world a safer, more loving, more accepting world for them. I don’t want them to have to live with the challenges I faced, and continue to face, as a Black person in America.

Did being a first-generation U.S. citizen impact on your life?

My parents wanted to give us a chance for a better life – to live in a safer neighborhood and attend better schools. When we moved, we were the first Black family on our block and one of only two Black families in the neighborhood. We clearly were not wanted, and our new neighbors let us know it.  One day we woke up to find our house had been vandalized and “KKK” had been painted on our house and car. At that young age, my parents had to explain to me and my brother who the KKK was and why some of our neighbors did not want us there. I was terrified to be in that house after that. My parents still live in that house and raised their three children there.

So you encountered the KKK or at least serious racism in Connecticut! What an alarming experience for a child.  Did it influence your decision to become a lawyer?

Yes, I figured out very early that I wanted to fight against the racism that sought to drive my family from our home – and that I would continue to experience throughout my life— and I believed that being a lawyer was the way to do it. I had no idea how to get there.  I was the first person in my extended family to graduate from college, so no one had a blueprint or road map I could follow. But I was blessed to find incredible mentors throughout college and law school to guide me.

Earlier in your career, you worked as a civil rights lawyer for the NAACP Legal Defense Fund, and now you are a law professor at New York University.  You clearly love the fight for justice. Why teach?

Throughout my legal career, I have always been drawn to teaching and mentoring law students and young lawyers.  I was always the person running the summer internship program! But I also teach because I think that the way to bring about true transformative change is, not just increasing the numbers of people who believe in justice and equality, but also, increasing the number of people that have the knowledge and skills to help fight for lasting change. So, in that way, teaching is another aspect of my career as a civil rights lawyer and social justice advocate.

Many lawyers in government right now are not showing us that they will uphold the Constitution or the rule of law. Can lawyers make the future better?

We also have lawyers fighting every day to defend the rule of law and to defend civil rights. During the civil rights movement, lawyers stood with activists and everyday folks fighting to protect our rights and the Constitution. They fought to make sure the values and rights embodied in the Constitution protect everyone. The same is happening today. I am proud of the way many lawyers — like those at the ACLU, the NAACP Legal Defense Fund, and the Center for Constitutional Rights who have fought and are fighting back tirelessly against what seems like a non-stop attack on the lives and rights of people of color.

Young people and even children are driving movements for change in ways that the world has not seen in 50 years.  Do students in law school have the same energy and passion for change?

Young people are absolutely changing the world in big and small ways. On a global level, we only need to look at the change that Greta Thunberg has inspired around environmentalism or the passionate advocacy of the Parkland shooting survivors. In New York, I have been inspired by the work of Teens Take Charge and students like Tiffani Torres who are speaking out about New York City’s segregated education system.

I am lucky to work with law students every day. They challenge me to think about justice and equality in new ways. Having so many mentors under the age of 25 has made me a better person, a better social justice advocate, and a better lawyer.

Who are some of your BlackHer Sheroes?

This is probably your hardest question! I have many different sheroes for the different parts of my life.

As a parent, my sheroes are certainly my mother, aunt, and grandmother who have been the backbone of our family, and who showed all of us how to overcome incredible odds. They taught me so much about what it means to love your children in a world that does not always love them back.

As an advocate and lawyer, my shero is Constance Baker Motley. She was an amazing lawyer for the NAACP and the first Black woman to be appointed a federal judge.  I also admire Congresswoman Shirley Chisholm, lawyer and children’s rights advocate, Marian Wright Edelman, and director Ava DuVernay. (Ava may seem like a less obvious choice, since she is not a lawyer, but I am inspired by the way that she is using her art to change the historical narrative and the entire conversation around the meaning of justice.)  Finally, Stacey Abrams also inspires me. She is fearless!

Let me ask you the miracle question.  You go to sleep tonight and wake up tomorrow and it’s October 2020 and a miracle has occurred for Black women.  What happened?

This is a great question! Black women are no longer being disproportionately impacted by poverty, health disparities, pay disparities, unemployment, and sexual violence. Black women are no longer being forced to live under the weight of racist and sexist stereotypes and are able to live full lives.  We aren’t feeling repressed or ashamed of any aspect of who we are. Expressing ourselves without judgment and without having to repress or swallow our anger would also be miraculous for us!