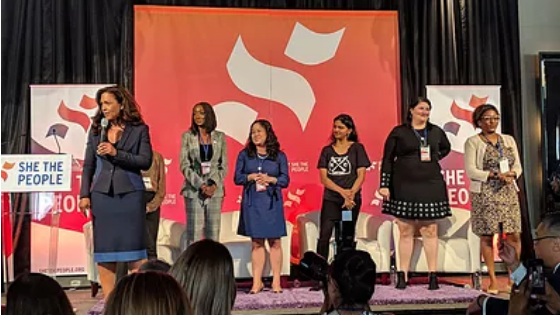 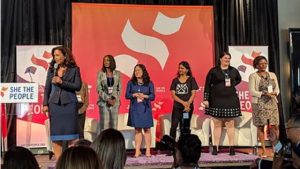 What do you get when you combine Dolores Huerta, co-founder of the United Farm Workers union, Congressmember Barbara Lee, Alicia Garza, co-founder of Black Lives Matter and hundreds of women of color (WOC) from across the United States?

She the People – an inaugural summit to showcase and advance women of color at the vanguard of the progressive movement in the United States.

The brainchild of BlackHer Shero, Aimee Allison, She the People, was held on September 20, 2018 in San Francisco, California and drew 600 attendees from 36 states.

Aimee Allison, who is also the president of Democracy in Color and host of the political podcast of the same name, shared this rationale for the gathering,

“We’re inviting immigrants, transwomen, LGBTQ women, and other powerful groups to come together. I believe we are waking up to our power and the numbers are with us.  Black and Brown folks are already the majority in many states. If we come together, we can not only win in 2018 but also set the table for 2020.” 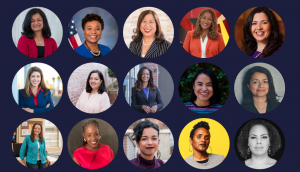 In addition to showcasing amazing women of color who are running for or already in office, the event highlighted women whom Allison calls “hidden figures,” a reference to the movie of the same name.  These women are campaign strategists, grassroots organizers, and political fundraisers and include Nse Ufot (upcoming BlackHer Shero!), who runs the New Georgia Project, a non-partisan organization which has added over 225,000 new voters to the rolls, and Tram Nguyen, co-executive director of the New Virginia Majority, a multi-racial, multi-issue organization, which has touched over 1 million voters of color in Virginia.

Finally, She the People highlighted leaders of key nonprofit and trade organizations like Ai-jen Poo, director of the National Domestic Workers Alliance and Saru Jayaraman, president of Restaurant Opportunities Centers (ROC) United which aims to “improve wages and working conditions for the 14 million people who work in America’s restaurant industry.”

She the People was a powerful homecoming for women of color.  It was also a visible sign of a growing political movement that is grounded in and leveraging the changing demographics of the United States.

It is well known that by 2050, “minorities” will be the majority in the U.S.  Political strategists are asking what this will mean for democracy.  See below. 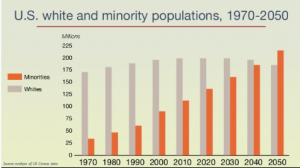 According to William Frey, Brookings fellow and author of Diversity Explosion: How the New Racial Demographics are Remaking America,

“…from 2010 to 2016, the Black population in the south grew by 2 million, while the Hispanic population grew by 3 million, largely in Texas and Florida. Black and Latino voters and young people in the South are friendlier to Democratic candidates than older, white voters are, which could affect the region on Election Day.”

Allison and her colleague, Steve Phillips, founder of Democracy in Color and author of Brown is the New White: How the Demographic Revolution Has Created a New American Majority understand this population shift.  They have been vocal about the need for a new electoral playbook which is responsive to and centers Black and Brown voters and candidates.  According to Phillips,

“Conventional wisdom in U.S. politics is that in order to win, you have to avoid alienating White swing voters, which usually results in distancing yourself from people of color and their agenda. But the demographic revolution of the past 50 years has transformed the U.S. to where the percentage of people of color in the population has grown from 12 percent to 38 percent. Now there is what I call a New American Majority consisting of progressive people of color and progressive Whites. That’s the coalition that elected Obama, and when it has been uninspired and ignored—as happened in 2010 and 2014—voters of color have stayed home, and Democrats have lost badly. We need to run towards people of color instead of away from them in order to win, and I want to drive that message home…”

Allison has big ambitions for She the People and the role that women of color will play in advancing the New American Majority.  For her, success will come from the willingness and ability of women of color to run for office and aggressive efforts to engage new voters.

“The swing voter of our time is not a Republican turned Democrat,” said Allison. “It’s a non-voter who starts to vote.”

With voters and communities of color facing the impact of mass incarceration, environmental degradation and extreme disparities in wealth and income, it seems that She the People has arrived just in time.  Oh, and there is a presidential election in two short years!

Kudos to Aimee Allison and the She the People team for doubling down on a new political strategy that promises to reward women of color for our participation in electoral politics and truly make our country great.

If She the People is right, it’s women of color and our allies who will actualize the promise of America – life, liberty and the pursuit of happiness for all!

On Being Partner and Bringing Your A-Game: An Interview with Alicia Batts