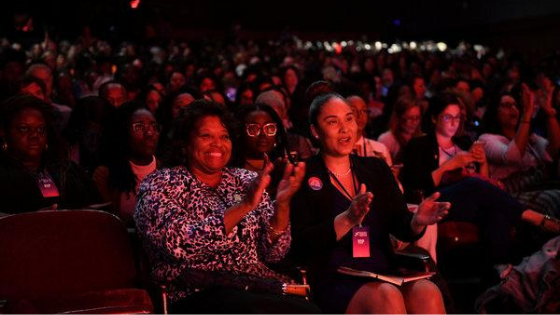 Every day that Donald Trump remains in office, Black women’s health and well-being are at risk. That’s why this next election is so critical. But, even with this sense of urgency, Black women are still selective and intelligent voters. In this historic primary season, when there are so many candidates to choose from (there are now 21 Democrats in the race and counting!), we won’t be voting for anyone who can’t clearly speak to our issues.

That’s where She the People comes in. On Wednesday, April 24th, the organization hosted the first ever Presidential Forum focused on women of color. The idea behind it was simple. Though some Democrats continue to endlessly ponder how they can win back white working-class voters in swing states, we know perfectly well that elections can’t be won without the votes of Black women and women of color. In order to win in 2020, candidates must engage with us and answer questions about our concerns.

Eight presidential candidates attended the event—which took place in Houston at Texas Southern University. It is significant that the site for the forum itself was a historically Black college and the alma mater of Barbara Jordan, the first Southern Black woman elected to the U.S. House of Representatives. Though women of color have often organized as a collective group, there is no denying the history, strength, and power of Black women’s political leadership.

In case you missed it, here are a few highlights from the forum and what they mean for Black women.

Senator Elizabeth Warren has specific plans for tackling racial disparities in maternal mortality, housing and policing. The very first question asked of the candidate was about addressing maternal mortality. And right away, Warren acknowledged that black women are 3-4 times more likely to die from childbirth or pregnancy-related causes than white women. She’s got an ambitious plan to tie hospital funding to outcomes. If hospitals don’t show that they are bringing down maternal mortality rates, she wants to have some of their money taken away.

Senator Bernie Sanders is struggling to talk about race, even though he’s had three years to get his act together! In the most cringe-worthy part of the forum, Sanders couldn’t give a decent answer about addressing the rise of white nationalism in America. He started out saying all the right things about how Donald Trump is dangerous and that, if he were elected, he would seek to end all forms of discrimination. But then things got really weird. When pressed again to more specifically answer the question, Sanders pivoted to talking about his participation in the 1963 March on Washington and his support of Jesse Jackson’s presidential run in 1988. His response was met with boos and groans.

To be clear, no one was booing marching with Dr. King. What people were annoyed about is that Sanders is constantly messing up when it comes to addressing race. This was also an issue for him in 2016. He seems to think that stuff he did decades ago in the name of racial justice is a substitute for answering basic questions about white supremacy today. Every time he brings up the March on Washington, I’m reminded of the scene from “The Color Purple” when white Miss Millie goes to the Black part of town and freaks out at all the Black people (who are trying to help her, by the way), yelling: “I’ve always been good to you people!” Sanders has a long way to go on this issue if he hopes to get votes from Black women.

When asked why women of color should choose her to be our next president, Senator Kamala Harris brought up her work on maternal mortality and the pay gap and how those disproportionately impact women of color. Earlier this month, Harris led a group of Senators to introduce a resolution to designate April 11-17 as Black Maternal Health Week. This is an issue she’s been championing for quite some time. In 2018, Harris introduced a bill to provide $30 million in grants to train healthcare professionals on racial bias and to address racial disparities in maternal health.

Former Secretary for Housing and Urban Development Julián Castro isn’t seen as a frontrunner in this race, but he should be taken seriously. Castro offered a really compelling story about growing up with a single mom who was also raised by a single mom who came to the United States at age 7. He acknowledged that their experiences have informed what he knows about the lives of women of color. And in his political career, he’s focused on issues that make a difference for Black women and our families—universal pre K, educational access, taking on housing discrimination. He’s got clear policy ideas and was smart enough to hire Maya Rupert, a badass black woman political strategist, as his campaign manager. It would be great to hear more from him as we move closer to the primaries.

There’s little question that Black women will get in formation to make sure that the Democratic nominee is elected president in 2020, regardless of who that is. But for now, we have a plethora of candidates to choose from and will continue to hold them accountable for directly speaking to Black women’s issues.

To watch a replay of the entire forum, click here.