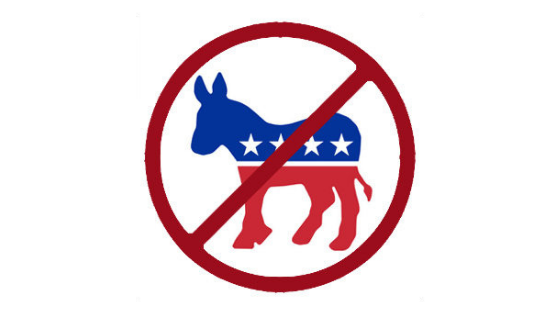 Earlier this month, I traveled to Philadelphia to attend Netroots Nation, the largest annual conference for progressives. While the election and defeating Donald Trump in 2020 were what most folks were talking about, a few Black women were having conversations about staging a Blexit and leaving the Democratic Party, once and for all.

Blexit (a combination of the words “black” and “exit”) is the brainchild of conservative Candace Owens, a Black woman who wants Black folk to ditch the Democratic Party and register as Republicans. Owens thinks Black people are stuck on the Democratic plantation and that liberation will only come by joining forces with the GOP.

The women I talked to weren’t into Owen’s version of Blexit. The idea that the GOP is our ticket to freedom is absurd—especially now, when Republicans have unapologetically become the party of Trump and white nationalism. The party is marching in lockstep with its racist, xenophobic and inept leader. As the election gets closer, we can anticipate that Trump, his supporters and enablers will double down on their hatred and continue to make America a frightening hellscape that none of us want to live in. The Republican Party, with its backward brand of conservativism, overt misogyny and racism, is not a viable political home for Black women.

In a two-party system, the Democratic Party seems to be the only alternative. But many Black women resent being held hostage by a party that frequently ignores us, fails to support us and doesn’t always act on behalf of our best interests.

Democrats need Black women. They know it and we do, too. We are the most consistent and reliable voting bloc and also play a critical role in mobilizing and turning out voters. In 2020, there is no pathway to the White House for Democrats without us. Yet, we continue to be taken for granted. When I asked other black women about their grievances with Democrats, these are some of the things they spoke about.

“We’re constantly chasing people who have never changed their minds about us.”

Every election cycle, Democrats spend millions targeting white working-class voters, the same people who’ve been voting Republican for decades. Simple math shows us why this is a losing strategy. In 2016, white voters preferred Trump over Clinton by 21 points (58% to 37%). But, according to the Pew Research Center, his margin of victory among whites without a college degree, was the largest margin of any candidate in exit polls since 1980. An astonishing 67% of whites without degrees voted for Trump compared to 28% for Clinton.

We know that these folks are voting against their own interests. But it’s an ineffective use of resources to keep centering them in voter outreach, especially when Democrats don’t understand how they are making their political choices. As Andrew Levison writes, Trump has effectively tapped into white working-class resentment and antagonism which is entirely unacknowledged in Democrats’ discussions of how to reach these voters. In other words, trying to appeal to them about policy won’t work. It’s not “economic anxiety” that made them vote for Trump, it’s his racism. His approval rating among Republicans is 72%. It went up 5 points after his series of racist tweets attacking The Squad. These folks are Trump’s base. So why in the world are Democrats so obsessed with them while continuing to ignore the voting power of Black women and other people of color? Building a coalition of people of color, young people, progressive whites and women should be our strategy in 2020, not trying to win back voters who are long gone and gleefully siding with Trump’s march toward fascism.

“Vote blue no matter the candidate.”

Since Trump took office, Black women have helped Democrats win victories in key elections. We stopped accused pedophile Roy Moore from getting a Senate seat in Alabama and elected the state’s first Democratic senator in 25 years. We helped Democrats win the Governor’s Mansion in Virginia.  We are the reason that Joe Biden is polling so high among the current Democratic candidates running for president.

And yet, it’s also Black women (and people of color in general) who are consistently told to get out and vote blue, no matter how imperfect the candidate, because Donald Trump has to go. In other words, hold our noses and vote for the Democratic, regardless of the nominee. But we already do this every election. We know perfectly well what’s at stake. We knew it in 2016, too. That’s why more than 90% of Black women who voted cast their vote for Hillary Clinton. We always suck it up. So, why is this message directed at us? Why isn’t the party telling white folks in middle America that they also need to suck it up and vote for a Democrat, even if he or she is a progressive? Instead, we are the party scapegoat for low voter turnout in 2016. Democrats have yet to acknowledge widespread voter suppression (which they did nothing about ) and that they wasted resources on turning out white working-class voters who weren’t with us to begin with.

Black women, for all our loyalty to the party, deserve better than this.

“We won’t forget how they’ve failed us before and are now failing The Squad.”

For the last two weeks, media attention has been hyper-focused on The Squad, four first-year progressive women of color in Congress—Representatives Alexandria Ocasio-Cortez, Ayanna Pressley, Rashida Tlaib and Ilhan Omar. Donald Trump has been using The Squad to whip his base into a xenophobic frenzy, attacking them for their outspoken critiques of his policies, calling them Socialists and telling them that if they don’t like America they can “go back  where they came from.”

But before Trump weighed in, The Squad was under attack by Democrats. The four women voted to deny additional funding for the crisis at the Southern border, refusing to enable the caging of babies and separation of families. Ocasio-Cortez publicly called out Speaker of the House Rep. Nancy Pelosi for approving the bill and failing to play hardball with Republicans. Pelosi fired back, dismissing The Squad in an interview as having a big following on social media but “not being more than four votes in the House.” Likewise, there are some moderate Democrats who say they are frustrated by The Squad’s critiques of the party.

There is a real tension in the party between people who want genuine change and those who are willing to maintain the status quo. Women of color, especially Black women, are unwilling to go along with business as usual in the Trump era and the party seems to be punishing them for it. This is not the first time Democrats have failed to show up for us. We all remember that Joe Biden failed to do right by Anita Hill during the confirmation hearings to appoint Clarence Thomas to the Supreme Court and he has yet to apologize. In elections where Black women have been candidates for office, the Democratic Party has often failed to give them the financial resources needed to win and/or back them in favor of moderate whites. We’ve had it with being marginalized by a group that depends on us to win. In 2017, Black women sent a letter to Democratic National Committee Chair Tom Perez noting the absence of Black women in Democratic Party leadership nationally and at the state level. Last year, Black women leaders also sent a letter to Pelosi and Senator Chuck Schumer addressing the fact that they hadn’t done enough to protect Rep. Maxine Waters from attacks by Donald Trump and his supporters.

It will be unpopular to say this, especially because it will generate cries of disunity at a time when Democrats are focused on beating Trump, but it’s worth saying anyway: The Democratic Party has a problem. Its relationship to Black women has long been abusive and won’t get better as long as the overwhelmingly white party leadership and moderates refuse to recognize our power, and our ability to champion progressive values that are good for all Americans and let us lead. Black women, as Fannie Lou Hamer once said, “we are sick and tired of being sick and tired.” There are progressive Black women who are fine leaving the Democratic Party behind for a new political home, provided its one in which they feel comfortable.

Black women are nothing if not practical. We know what’s at stake this election (and every other election) and our work is done both at the ballot box and in our communities. Some of us will stick around because we want to change the party from the inside out. Some of us will stay because there isn’t an obvious place to go. Some of us will stay because our mamas were Democrats, our grandmothers were Democrats and our aunties, too. And then there is a large group of young Black women and gender non-conforming folks who are organizing completely outside of the scope of electoral politics altogether, doing work around criminal justice reform, community development and black empowerment. They aren’t Democrats, they don’t trust the political system and it is questionable if they’ll vote at all. They understand that politics are lived outside of the voting booth and their capacity to build power and facilitate change at this moment is undeniable. It’s too bad the Democrats don’t hold enough appeal for them because they are needed now more than ever.

Should Black women ditch the Democrats? Probably not. Will we? Likely not. But these questions are worth asking, especially when Democrats seem to be grappling with how to lead in Trump’s America and what’s needed to win. How much longer should we continue to show up for a party that routinely doesn’t show up for us? I don’t know. Is this relationship serving us well? Definitely not. And if nothing else, for our generations of sacrifice, service and leadership, we deserve to have a political party that recognizes and values the important role we play in politics and in American society.