Sorry to Bother You Highlights the Role of Black Women as Revolutionaries [SPOILER ALERT!] 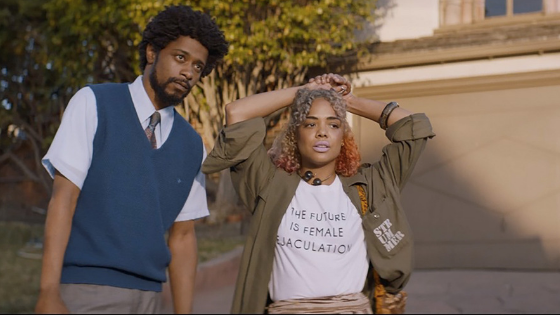 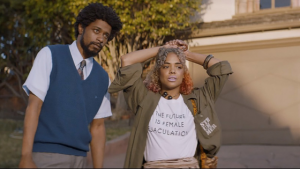 Sorry to Bother You comes out on DVD on October 23rd and for me at least, the brilliance of the film has yet to wear off. Boots Riley’s directorial debut takes us on a whirlwind tour of absurdist, socio-political critique that keeps us on our toes and transports us to a hyperreality that (disturbingly) feels as though it could be in our own future. I walked away from the film hyper-aware of the structures that keep us down. Riley’s film is a call-to-action to those who will listen.

When Sorry to Bother You begins, we meet young Cassius Green (Lakeith Stanfield) – otherwise known as “Cash.” He is sitting in the middle of a job interview for a telemarketing firm. He has prepared himself with a resume full of jobs he’s never had and fake employee of the month plaques and trophies. Though he is quickly ousted by the manager, he is hired anyway; the manager was won over by his clear determination and “ability to read,” and, Cash is overjoyed.

Following the opening scene, we learn the drive behind Cash’s phony resume. He is unemployed, four months behind on rent for a garage-turned-bedroom in his uncle’s (Terry Crews) house, and driving around Oakland in a car that is clearly on its last breath.

While at first, this seems like it could be a typical scenario for any young person in America, Boots Riley subtly and absurdly reveals that this isn’t our typical American story (yet!).

In Cassius’ world, it seems that the majority of the population is suffering and struggling to get by. Work is hard to get, and many appear to be homeless or on the verge of losing their homes; Cassius’ uncle is one such example. The jobs that people are able to find are random and odd!  For example, Cash’s girlfriend, Detroit (Tessa Thompson) spends her days twirling business signs on street corners. And even office jobs don’t pay enough for employees to make ends meet.

And what’s the alternative to this precarious state of existence?

Citizens can work for Worry Free, a corporation that seems to have a monopoly on everything in this world. By literally signing their lives away, employees receive food and shelter. Mind you, “shelter” is a relative term. The shelter is a room to share with 8 or more people, two to a twin-sized bed!  It is pretty much a glorified prison.

Boots is making a pretty clear and bold statement here.

Capitalism makes us all prisoners.  We are all captives of wage slavery, a form of modern-day slavery. (Check Amendment 13.)

I find it interesting that Riley chose to tell this story through the perspective of Cash, a character who many could easily interpret as merely being out for himself. That’s not to say that he isn’t; in fact, one will find him to be almost incredibly self-serving. But he isn’t alone and isn’t without cause.

Cash is a product of his environment, much as we all are in a capitalist system. His need to have a purpose in the world is a recurring point throughout the film. It is the reason he stays in the infamous “Power Caller” suite, a promotion he receives at the telemarketing firm by literally selling war and slavery. He believes that through this job he has finally found his purpose.

Therefore, it’s ironic that Cash hooks up with Detroit, a self-proclaimed artist and secret (or not so secret) revolutionary. When Cash goes on his existential rants, Detroit is the grounding rock, reminding him – and us – of what it means to be free.

She lives her life radically, taking each moment as it comes, creating art about Africa’s “beauty, love, and laughter,” and fighting the oppressive systems at play.

As a radical Black woman, Detroit makes her own rules in spite of the systems that surround her. In every moment on screen, she is repping a piece of feminist art – such as a t-shirt proclaiming “The Future is Female Ejaculation” – and she is incredibly committed to dismantling the capitalist system by joining the revolutionary group “The Left Eye.”

Although Detroit also ends up working for the same telemarketing firm as Cash, she makes it clear that her participation in the workforce is purely a mechanism for survival as she works toward her own vision of the future. That is why she is so disappointed when Cash takes a promotion in the midst of their coworkers’ efforts to unionize.  She attempts to stay by his side and help him see the ways in which he is complicit in murder and slavery by being a Power Caller and catering to whiteness. But when he refuses to think outside of his own selfish needs for money and validation, she stays true to her own values and leaves him.

I could dissect the ways in which Detroit’s character sells out, including catering to whiteness in order to sell her Afrocentric art pieces to rich white people.  But it’s important to recognize the ways in which artist-revolutionary types are often left with little choice about who buys their work if they want to make money. Rent has to get paid.  It’s also important to remember that the role of the artist is to get the message out and help it spread.

Detroit’s art is seen throughout the film, through her participation with The Left Eye group, and through her anti-establishment pieces.  She repurposes the racist, sexist, and classist advertising throughout the city into messages of self-empowerment for the people.

Much like the Black women revolutionaries throughout history, Detroit is always fighting back. And as long as she’s fighting, we’re winning. 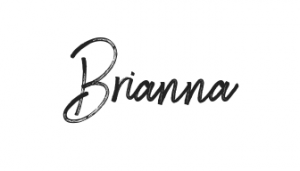 Why I Want to Take Over the World with Shea Butter: An Interview with Rahama Wright