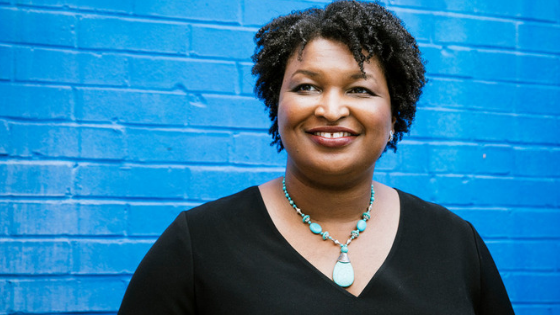 Whenever I think about Stacey Abrams, I am reminded of the very best of #BlackGirlMagic. A Spelman and Yale-educated lawyer, tax expert, entrepreneur, author and former minority leader of the Georgia House of Representatives, Abrams is best known for her recent, historic campaign to be Georgia’s governor.

Sadly, Abrams isn’t Georgia’s current governor, thanks to Republicans who managed to steal the election by suppressing votes. But she did win—many times over. She became the first Black woman ever nominated for governor by a major American political party. She tripled voter turnout among Latinos, Asian-American and Pacific Islanders, increased the youth vote by 139 percent and received more votes than any Democratic candidate in Georgia’s history.

Still, Abrams’ loss was heartbreaking. As Black women, we know all too well the feeling of working hard our whole lives, doing our very best, having all the right qualifications and still having an opportunity unfairly snatched away from us. It’s exhausting and reinforces all the ways we experience structural racism and misogyny. It makes you want to bury yourself under the covers of your bed and never come out.

Lucky for us, that’s not what Abrams has done.

Soon after the election, Abrams launched Fair Fight, an organization dedicated to ensuring fair elections in Georgia through voter education and outreach and legal advocacy. Perhaps better than any Democrat in America, Abrams understands that our voting rights are under attack and that we must fight voter suppression every way that we can. She’s been raising the alarm since November, touring the country to talk about the importance of free and fair elections as the bedrock of American Democracy.

Translation: Republicans will continue to steal elections to make sure that they win if we don’t do something about it. In 2020, they will most certainly pull out all the stops to make sure that Donald Trump gets a second term. And they have Russia to help them. This is a crisis and Democrats aren’t talking enough about it. 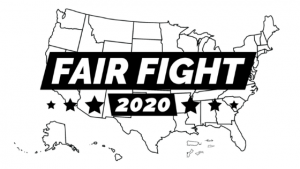 The good news is that Stacey Abrams is on the case. This past week, she announced the launch of Fair Fight 2020. Fair Fight 2020 is about working in 20 states to protect voting rights and ensure access to the ballot for all of us. According to The New York Times, Fair Fight 2020 will work in battleground and competitive states to “fix inaccurate voter rolls, address shortages of voting machines and provisional ballots and formalize the rules around counting absentee ballots.”

This is important, not just because a second Trump term would be disastrous. The 2016 election was the first national election after the Supreme Court cut certain provisions of the 1965 Voting Rights Act which prohibited discriminatory voter restrictions in Southern states. Since then, Republicans have introduced all kinds of laws to limit the ability to vote for Blacks and other people of color. And they’ll be able to freely do this without oversight from the federal government. It’s critical that we have organizations doing work to organize voters, increase turnout and fight suppression in the courts. That’s why Abrams’ efforts matter so much. She’s taking her loss and turning it into a lesson and opportunity for us to do better. She wants to strengthen our democracy by reminding us that we aren’t truly a democracy until every vote counts and every voice is heard.

After the results of her election, lots of people speculated that Abrams would run for president. Some of us still wish she would. She has been clear though, that she will not—at least not in 2020. She remains an excellent candidate for vice-president and has said that she would consider it after the primaries if she is asked. But right now, there is no more important work that she could be doing than her work with Fair Fight.

Admittedly, it would have been easy for Stacey Abrams to walk away from politics altogether after her race ended in November. But she did the opposite. In the midst of her hurt and disappointment, she decided that her state, the South and the country are worth fighting for. She chose to make sure we have the elected officials we actually choose. She became the champion of our democracy that we desperately need.

Too often, Black women are asked to be superhuman and save everyone when no one is trying to save us. America doesn’t deserve Stacey Abrams. But I’m sure glad she’s here. She’s working to make this country live up to its promise. If anyone can lead the way to a better future, it’s her.

On Helping Americans Get Healthy Without Going Broke: An Interview with Congresswoman Donna Edwards