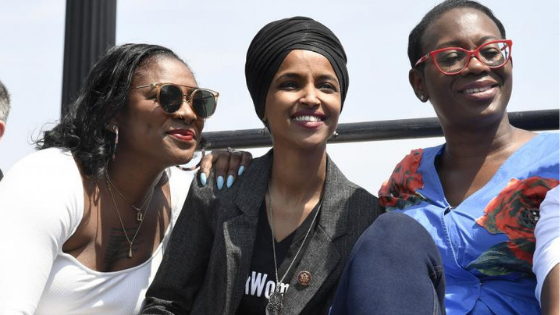 Some Republicans have subjected Rep. Ilhan Omar (D-MN) to vicious attacks ever since her election to Congress in 2018. Of course, partisan attacks are nothing new in this era of fractured politics where political parties seem to be more important than people. But the lies and smear campaign being waged against Congresswoman Omar go way beyond politics as usual. Since being targeted by Donald Trump in a tweet last month, which included doctored video of a speech she made about the September 11, 2001 attacks, Omar has experienced an uptick of death threats directed at her and her daughter.

Omar’s identity as an outspoken Black, Muslim, hijab-wearing, immigrant woman in Congress who originally came to this country as a refugee, is exactly what irks Republicans. And because they are hoping to capitalize on white America’s fear of the “other” and a combination of racism, sexism, and Islamophobia, they aren’t likely to let up anytime soon. This is exactly why Black women organized a rally in support of Omar last Tuesday in Washington, DC.

The “Black Women In Defense of Ilhan Omar” event took place in front of the Capitol Reflecting Pool and was organized by members of the Movement for Black Lives (M4BL) along with professors and activists Angela Davis and Barbara Ransby. The speaker line up featured prominent Black women such as Rep. Ayanna Pressley (D-MA), Black Lives Matter co-founder and BlackHer Shero Alicia Garza, former Ohio State Senator Nina Turner and Rep. Omar herself. 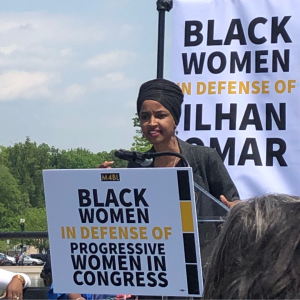 I had the honor of being there and can attest to the fact that the love for Omar was palpable. At various times, the M4BL DC organizers led us in chants of “We love you!” directed at her. She was moved to tears and even said so. As she addressed the crowd, one of the very memorable and powerful things that Omar said was that she is well aware that Republicans can’t stand that she behaves as if she has the same right to be a lawmaker that they do. She said,

“The thing that upsets the occupant of the White House, his goons in the Republican Party [and] many of our colleagues in the Democratic Party is that they can’t stand that a refugee, a Black woman, an immigrant, a Muslim, shows up in Congress thinking she’s equal to them.”

The attacks on Omar highlight the need to support Black women once they are elected to office. Enter Network of Elected Women (NEW). NEW is an organization that seeks to provide elected women with “the support and guidance needed to do their jobs well.” NEW is organized by geography and is tailored to specific communities so that women who are local elected officials can form circles to support their particular needs—whether it be about feeling isolated as the only woman member of a particular committee or detailed questions about navigating the challenges of elected office.

I spoke with Kimberly Peeler-Allen, who serves as an advisor to NEW and is also a co-founder of Higher Heights, a national organization which is dedicated to investing in Black women’s political leadership—whether it be through supporting progressive Black women running for office or organizing and educating Black women voters. I asked Kimberly what NEW could do to specifically help other Black women legislators like Rep. Omar to navigate life in office.

“There is a burgeoning circle of hijab-wearing legislators and they are planning on meeting virtually because they are all across the country. But that is a very specific experience and NEW is creating spaces where [these women] can be networked with other [women] so that they have that support system.”

Peeler-Allen says that while networks like NEW are critically important for providing support for Black women elected officials, there is more work to be done and that we can all play a part. She spoke about raising awareness about the issues that elected women face, a task she says that anyone can and should do. This will bring attention to what is happening and also highlight the current attacks faced by women in office because of their race, religion or gender.

“Everybody has a platform—whether it is you talking over your fence to your next door neighbor or your small Facebook following or your book club. Everyone talks to other people. Talking about these current issues and sharing what happened helps spread the message that this is not something that will be tolerated… Also, it’s not just calling out these racists and the Islamophobic statements that the president makes. What are the small slights that your neighbor or your uncle or your friend says that are derogatory to Muslims or Black women or anyone other than yourself? Calling those out helps eat away at the normalcy of some of these statements.”

I heard Peeler-Allen’s words as a call to action for Black women. It’s not enough to just elect Black women to office. We need to provide support for them across the board so that they can excel in their positions. And we also need to stand in solidarity with them in the face of attacks designed to diminish their humanity. We don’t have to have thousands of social media followers or large platforms to do that. What’s required is a willingness to speak out and remind everyone in our lives that we won’t accept racism, sexism, and bigotry as normal.