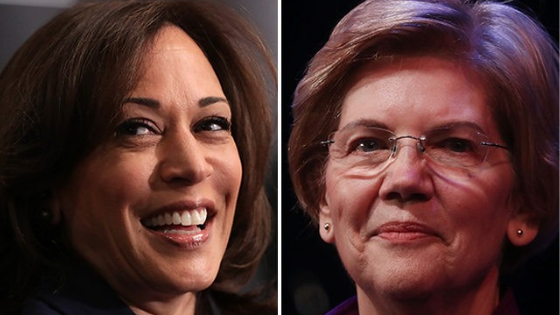 Did you watch the Democratic debates?  They took place on June 26 and 27.  Twenty candidates tried to create a sound bite and many professed to support progressive healthcare, immigration, and economic policies.  Here are a few of the highlights!

The big news from the debates was that Senator Kamala Harris commanded the stage on debate night two.  She took control of a group discussion of race and chastised former Vice President Joe Biden for his past position on busing (he was against federal enforcement of busing to end segregation in public schools).  Harris cited her own experiences as a child who was part of a voluntary busing program in Berkeley, CA in the 1970s.  Harris scored points for her passion and command of the issues, and folks could envision her “prosecuting Trump” for crimes against America.  Following the debates, the Senator’s contributions have surged as have her poll numbers, and Biden’s have gone down.

On the debate stage, Senator Harris told Vice President Biden that she doesn’t think he’s a racist.  (How could he be?  He was President Obama’s VP for eight years.)  Her main point is that he’s out of step and out of touch.

Harris also played den mother on stage, when she shut down feuding debate candidates by saying,

“Hey guys, you know what, America does not want to witness a food fight, they want to know how we’re going to put food on the table.”

This seemed like a ready response, but there was no question that she was poised and prepared.

The remainder of the debate did not go well for Biden either.   He was not spontaneous, not fully prepared, nor did he seem to enjoy answering the questions that were asked of him.  After the debate, the former Veep did some cleanup. He told Jesse Jackson’s Rainbow Push Coalition in Chicago that he never opposed voluntary busing and quoting the Chicago Tribune,

“I heard and I listened to and I respect Sen. Harris. But you know we all know that 30 seconds to 60 seconds on a campaign debate exchange can’t do justice to a lifetime commitment to civil rights,” Biden said.

Going forward, Biden needs to think about how he talks about his leadership and his recent record.  As we all know, you never stop proving yourself in today’s world.

There was another dust-up on debate night one.  It featured the battling Texans, Secretary Julián Castro and Congressman Beto O’Rourke.

Julián Castro beat up and bested Beto O’Rourke for being against the decriminalization of illegal border entries, rendering Beto speechless and motionless. Again, it was an exciting moment, which showed that on the debate stage, candidates can’t rely on nuance to make their points.  They must hit hard to show that they can fight the POTUS, who plays dirty and hits harder whenever he’s questioned or attacked.

While the men were fighting, Senator Elizabeth Warren won debate night one. If her closest policy twin Senator Bernie Sanders had been on the stage, most folks think she would have cleaned his clock.  The most left of the left may have a new leader in the intense, but composed and professorial Democratic Senator.  She continued to propose policies that help the 99% over the 1% (Can we interest anyone in a tax hike on those who have more than $50,000,000 in assets?) She explained how America’s high health care costs are bankrupting families. She got a plan to fix that!

Many post-debate tweets thanked Bernie Sanders for bringing corporate corruption and the interests of ordinary people to light but concluded that they’d found a new leader in Elizabeth Warren.

Another standout from debate night one was Governor Jay Inslee from Washington state. He’s running to address climate change, which will destroy the planet in a matter of decades if we don’t take bold action. He had a good night overall and often took command of the stage. Inslee’s standout moment came when all of the candidates were asked what the biggest geopolitical threat to the United States of America is and he said:

“The biggest threat to the security of the United States is Donald Trump.”

(That’s what I was thinking!)

The good news is that the debates underscored that several candidates would and could best Trump in being the leader of the free world.

In other news last week, regarding the actual President of the United States, columnist E. Jean Carroll  accused the POTUS of sexually assaulting her 20 years ago and Trump made light of Russian intervention in the U.S. elections at the G20 Summit in front of Putin (“Don’t meddle in our election. LOL!”)

Have a great week.