The State of the Union for Black Women in 2020 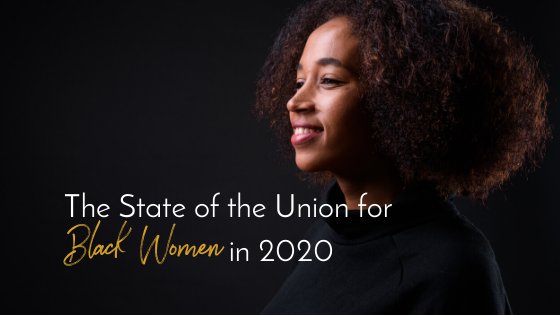 The State of the Union address will be given by Donald Trump on Tuesday, February 4th and the timing of this year’s speech couldn’t be more significant. It will be Trump’s first message to the nation after being impeached by Congress and comes only a day after voters in Iowa select their choice for a nominee to replace him.

But that speech is not for or about us. So here at BlackHer, we wanted to do our own State of the Union for Black women and see how things look for us in 2020.

Click here to see our State of the Union for Black Women in 2019.

Though the country is headed into its 9th straight year of job growth (Thanks, Obama!), Black women are still facing obstacles to finding good jobs that pay us what we need and deserve. Though we are more likely to work than other women, in 2018 we only made 61.9 cents to every dollar earned by white men. Our low wages have an impact on our families too. According to the Center for American Progress, nearly 85% of Black mothers are breadwinners for our families, a number higher than any other racial or ethnic group. We also have a disproportionate amount of financial burden, because we are often the main caregivers for our aging parents, children, and grandchildren.

This is why advocating to raise the minimum wage is so important for us. An estimated 40% of Black women would receive a wage increase if the Raise the Wage Act became law and made the federal minimum wage $15 an hour by 2024!

In addition, as Jocelyn Frye, BlackHer Shero and senior fellow at the Center for American Progress reminds us, we need to “support economic policy changes to improve access to paid family and medical leave, affordable and high-quality child care, and caregiver stipends.” Learn more.

Despite the incredibly high cost of education in the United States, we are obtaining degrees in higher numbers than ever before. Between 2004 and 2014, the number of Black women with bachelor’s degrees or higher increased by 24%. And in the last two years, we earned between 64-70% of all the associate’s, bachelor’s, master’s, and doctoral degrees earned by Blacks in the United States.

Of course, this hits us even hardest. Though Black women continue to make strides in education and earn degrees at higher rates than ever, those gains don’t translate into economic stability and security. We carry a disproportionate amount of student loan debt and our job earnings aren’t enough to cover what we owe.

We said this in 2019 and we’ll say it again: it isn’t enough to get a college degree. We need policy interventions like universal basic income, raising the minimum wage and tax reform to achieve economic prosperity for ourselves and future generations.

Our health and wellness continue to be of major concern. In late January, new data was released about maternal mortality rates in the United States. We continue to be in crisis, with Black women dying 2.5 times more than white women from maternal causes. Researchers say this is from a combination of structural racism, lack of access to quality prenatal care, and poor health such as obesity and hypertension.

We desperately need to prioritize our self-care and healing, so we can thrive as individuals and as a tool for resisting racism and sexism. Check out this video about the Nap Ministry—an Atlanta based organization founded by a Black woman, Tricia Hersey, which focuses on rest as the antidote for burnout and trauma!

Check out Black Women’s Health Imperative and GirlTrek for more resources and support in getting healthier.

Black Enterprise has noted that Black wealth may fall to 0 by 2053. Black women’s wealth (what we own minus what we owe) is disturbingly low because of decades of racist housing and asset-building policies, like redlining and the GI Bill which left Black families out.  What’s troubling is, that even when we compare the wealth of middle-class white and Black households or families, we are still so far behind.

The Black women’s wealth divide matters because having assets means so much more than having a savings account.  Having wealth means having the ability to:

The 2020 elections are a great time to talk to our legislators and each other about what we are going to do to make significant strides in building wealth for ourselves, our families, and our communities.

There are proven policy interventions that help us to put more money in our pockets and save.  And with sustained pressure and the engagement of millions of us, we can effect change. By enhancing progressive policies such as the Earned Income Tax Credit, the Child Tax Credit, Higher Education Tax Credits, and tax credits for low-income homeowners and renters, and more, we can build our wealth.

If you want a comprehensive look at the government intervention and structural change that is necessary to get us out of this mess, read The Road to Zero Wealth: How the Racial Wealth Divide is Hollowing Out America’s Middle Class by Prosperity Now.

In 2019, Black women had a huge impact on politics. Senator Kamala Harris ran for president—channeling the amazing Black women, like Shirley Chisholm and former U.S. Senator and Ambassador Carol Moseley Braun, who came before her. On the campaign trail, Harris often spoke vulnerably about what it meant to break the glass ceiling for women of color in politics. Sadly, she dropped out of the race in December. However,  because her candidacy was taken seriously by the political establishment, it’s clear that she paved the way for other Black women to run in the future.

Chicago elected its first Black woman mayor, Lori Lightfoot, in April 2019. Out of America’s 307 biggest cities, 12 are now governed by Black women! And more Black women are running for office at local, state and federal levels than ever before.

Of course, we must also shout out Congresswoman (Auntie) Maxine Waters, who has been championing impeachment since before Trump was inaugurated. Thanks to her unyielding efforts, the House of Representatives finally voted that we should remove him from office once and for all.

In 2020, Black women will be central to the presidential election. Experts are predicting what we already know, that the path to the White House goes through us. If candidates want our votes, they are going to have to address the very issues of wealth, maternal health and jobs that we outlined above. Together, we’ll do our part to pick the next president and create communities where we (and everyone else) can thrive!

Shape OUR Future: Take the 2020 Census

#BlackHer2020: Reparations or Pay Me What You Owe Me