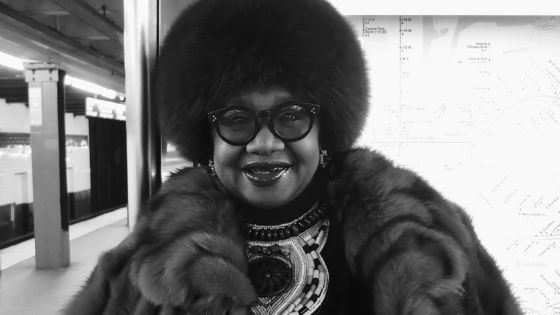 Our BlackHer Shero of the Week is Irene Gandy, an African-American pioneer and an American original.  Gandy has worked on more than a hundred Broadway shows. In 2012, she was the first Black woman to win a Tony Award for Producer for a revival of “Porgy and Bess,” starring Audra McDonald. Gandy has worked with legendary artists like Lena Horne, Bob Fosse, David Mamet, The Jackson Five, LaBelle, Patti Lupone, Phylicia Rashad, Jeffrey Richards, Freddie Jackson, Carolyn Jones, Ron Delsener, Lloyd Williams, Voza Rivers, Gerald Schoenfeld, and Linda Stewart.  In 2015, Gandy produced All the Way, which featured Bryan Cranston’s Broadway debut in the part of Lyndon Johnson. Most recently, in 2018, Gandy was a producer of American Son, starring Kerry Washington.  For her 65th birthday, Gandy was honored with a caricature on the walls of the legendary Sardi’s.  At the age of 70, she launched her own line of furs designed by Mr. Pete.

BlackHer talked to Irene about her iconic career and life. Read on!

Angela:  Irene, when I met you I thought to myself ‘This lady redefines fabulous.’  From head to toe, your clothes are always elegant standouts. Your personality is “larger than life,” as are your principles.  You’ve been standing up for Black people for decades.  Add to this that you’re a Black woman who has worked on the business side of show business, one of the most competitive businesses around, for fifty years.  It seems like you’ve had a wild ride through life so far.  Can you tell us a bit about yourself?

Irene:  I was born in Long Island, New York. I started working in the theatre in 1968.  Before that, I was a hippie living in Greenwich Village. I left New York University a few weeks after enrolling and started acting. I was doing a lot of other creative things too. I danced topless in Central Park in New York City. I met and worked on projects with other artists. I tried acid and other drugs. I was young and for me, it was all part of the time. I hung out with some incredible people too: Langston Hughes, Jimmy Baldwin, Alan Lomax, Andy Warhol and other hip artists of the time.  I loved it.  I have always been attracted to smart, creative types.  What was even better is that we were using the arts for activism. I’ve been a long-time activist, so that was also perfect for me.

Angela: How did you move from being a Greenwich Village hippie to show business doyenne?

Irene: I liked working on projects with creative people, and I started helping them promote their work.  Someone asked me to be their press agent. I think I became great at promotion and management because I never forgot that creative work is still work and that it must be profitable for you to keep doing it.

I had a few jobs in entertainment including senior positions in the music business, before focusing on producing plays.  For example, I worked with Taj Mahal Records as the head of Black marketing, as well as with some other labels. My Black artists’ records could not get played on white radio stations unless they were so popular on Black radio stations that they could not be ignored. During that time, Boz Skaggs was making records where he sounded Black and they were getting huge airplay on white radio stations.  It was ridiculous.

As a Black woman in the music industry in the 1970s, I had to fight for respect for myself and other Black people. White executives felt empowered to talk about Black people’s taste, our artists’ work, and to then make decisions based on their opinions. These guys knew nothing about us.  I got frustrated.  Eventually, I decided that if I was going to be in a room where people were talking about the “Black perspective”, I needed to have a seat at the table where I could lead the discussion.

I shifted my focus to theatrical productions.  I became a producer, part of the team putting on the play. Producing can provide you with a degree of control on a project.

I produce plays that mean something to me, whether they feature all Black, all white or diverse casts. I still am a voice for “us” when Black issues come up. White people in show business who are decision-makers need to work with us because they still don’t understand our experiences. They don’t have dangerous or humiliating police encounters, they are not followed in stores when they are shopping.  They don’t experience daily discrimination at work or any place else. Given this, they can’t fully understand our experiences or frame of mind when they produce art.

Angela:  Can you explain what you mean by this?

Irene: Black people’s strength is our ability to move forward despite the bad experiences that we have. Black people regularly experience danger, discrimination, indignity and more.  Yet somehow, we stay grounded. I don’t think white people understand this. Unlike white people, we don’t feel entitled, which is fortunate because if we did we’d go crazy, given how we are treated. We also don’t have resentment against white people or experience self-loathing. If we felt any of these things, we’d never be able to get out of bed in the morning.  We’d be paralyzed or too angry about what we know we may experience on any given day. Since they don’t get us, some artistic productions have some very off portrayals of Black people.

Angela: You are addressing some profound issues, but your perspective is so calm and matter of fact.

Irene: Well, I am in recovery.  I have been sober for 5 years.

Angela:  Really? Has your life changed since you got sober?

Emotional sobriety means that you eliminate from your life, the insecurity that drives you to drink.  With drinkers, one negative comment can throw you off course.  You can’t go there.

When I stopped drinking, I found that I was a much nicer person to other people and to myself. I paid attention to my words, both what I said and what I thought. My advice to younger women is to take care of yourself now!  Avoid excess. Don’t take too much on and say “No” with conviction. You must let things go and broadcast positivity.  If you do these things, you’ll live longer and have a more pleasant life.

Irene: My daughter, Mira Gandy.  I love her so much. She’s an amazing person and a gifted artist.

I am proud that I let my daughter be the woman I raised her to be. We are very close, but I let her live her life. At one point, I used her as a crutch.  I did not know where I fit as a person after I’d spent years taking care of her and others, and she grew up. I let go and focused on being supportive of her being her own person.

Angela:  You were married to your daughter’s dad.  Later, you divorced and came out as a lesbian in your forties. What happened?

Irene: I was very homophobic as a younger person.  As I grew older, I changed. For one thing, I saw that there were a lot of young, awesome Black women who were not attached to anyone.  They were by themselves. I wondered why. I thought to myself, why should any one of us be alone?  Everyone needs companionship and having it with a great person is a gift.  That’s part of why I became a lesbian.

I also thought that men required a lot of work.  I had to make a living and I didn’t have the time or energy to pet or serve them.

Angela: I’ve heard you say that you are living in your truth.  What does that mean?

Irene: I have been living in my truth since I was 70.  I’ve had an evolution.  For me, it means that I accept myself and others. I don’t care about my status.  Now, I do what I want without judgment or worry about how it looks. Life can be a party.

Angela:  What can other Black women do to live their truth?

Irene: Help each other. In the old days, Black people shared helpful information with each other.  Today, things are so competitive.  People don’t seem to support each other. Black women should regularly share information and come together. We’d be so much stronger if we did. United we stand, divided we fall. That’s a true saying.

We can also stop seeking validation from the wrong people and stop listening to what they say about us.  We can believe that we are loved, and value ourselves knowing that.

Angela: Let me ask you the Miracle Question.  You go to sleep tonight and wake up tomorrow and it’s February 2020 and the miracle has occurred for Black women.  What happened?

Irene: Black women, men, and children are finally seen and treated as human beings.  We have peace as women because our children are no longer killed for being in the wrong place at the wrong time.  We love and thrive from knowing that we are loved in turn.

To learn more about Irene Gandy’s life and accomplishments, visit the Ubuntu Biography Project and check out her website!

On Creating a Pathway for Black Women in Innovation Entrepreneurship: An Interview with Kathryn Finney