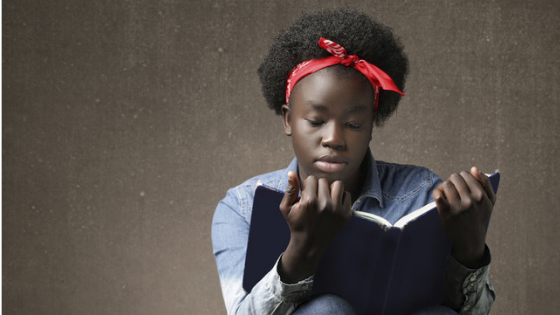 Black women are outpacing Black men in the attainment of college degrees. See the chart below. 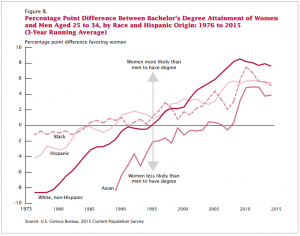 And, we have made big strides in college graduation rates over time. See graph below.

But there is still a BIG gap in college graduation rates between Black women and other demographics.  And for far too many of us, a college education is still out of reach.

To compound matters, even when we do make it all the way to and through college, our struggle is not over.  Many of us are left with debilitating debt.

A study by the American Association of University Women shows that “Black women have by far the most outstanding student debt after college graduation compared with both white men and women.  The report found African-American women amass an average of $30,400 by college graduation, compared with $22,000 held against white women and $19,500 for Caucasian male students.”  And a whopping 57 percent of us are having trouble repaying debt. See the chart below. 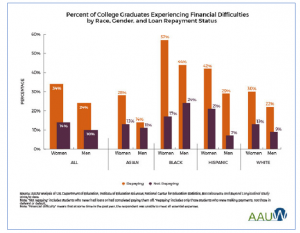 That’s why, this week’s announcement that several wealthy white celebrities paid hundreds of thousands of dollars to help their kids cheat their way into college, made me want to scream, but not for the reason you think.

Here’s the thing, however distasteful. The real driver of inequality in higher education is not corruption and fraud, it’s legal practices which privilege whites and lock Black women and so many other underrepresented students out of college.

The fact is college admissions are rigged and we’ve known this for a long time.  Elite schools like Yale, Stanford, and Wake Forest, that were all caught in this week’s cheating scandal, play by a set of rules that favor wealthy whites.  For example, many of these schools have long admitted students regardless of academic ability or white people’s favorite word “merit,” if their parents are alumni and/or are top charitable donors.

“A 2010 study of the top 100 national universities, as ranked by U.S. News & World Report, found that about three quarters provide a preference based on who your daddy or mommy is.” Other research shows, “on average, the children of alumni receive the equivalent of a 160-point boost on the SAT (out of a possible 1600 points).”

With median wealth for single Black women at $200, few of us will ever be able to donate to the annual fund much less dedicate a wing of a library or dorm.  And hundreds of years of segregation on college campuses means, that even when our parents and grandparents made the grade, they weren’t welcome on college campuses. Thus, Black women are doubly disadvantaged by our unmeritocratic admissions system.

Now that I think about it, maybe that’s why this week’s corruption scandal bugged me so much.  Felicity Huffman and “Aunt Becky,” didn’t even need to waste their millions on bribes to ensure that their white children would get to and stay at the top of the class.  They just needed to follow the current rules.

To learn more about the role of heredity in college admission, read Dream Hoarders by Richard Reeves and Affirmative Action for the Rich: Legacy Preferences in College Admissions by Richard D. Kahlenberg.