What Do the Democratic Debates Mean for Black Women? 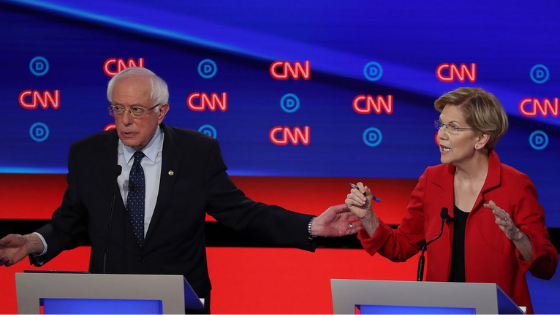 The second set of Democratic debates took place on July 30-31 in Detroit. If you missed them, then you were spared 5 long, mind-numbing hours of twenty candidates fighting over whether a progressive vision for America can attract voters in the Trump era. I’m not going to lie—this round of debates was disappointing compared to the ones in June. But it did give us some important information about what Black women can expect this primary season and which candidates care about the things we do.

Here’s what happened on night one:

On the first night, Senators Elizabeth Warren and Bernie Sanders stood out as the clear progressives in the race. They traded jabs with other candidates about healthcare, immigration, jobs and the economy. Moderate candidates had a clear strategy going into the race, which was to attack Warren and Sanders as having unrealistic ideas and being too far-left to appeal to the average American. At one point in the evening, former Rep. John Delaney (D-MD) slammed them both as making “fairy tale” promises. Warren stopped him in his tracks, with what might have been the best mic drop moment in debate history, Warren said,

“I don’t understand why anybody goes to all the trouble of running for the president of the United States just to talk about what we really can’t do and shouldn’t fight for.”

Tell ‘em, Liz. Instead of “Yes, we can.” moderate Democrats running for president in 2020 seem to think “No, we can’t.” Or “Maybe we can, but we probably shouldn’t.” Either way, this is not a compelling vision of America.  Nor is it consistent with progress for Black women. It lacks vision, enthusiasm, and courage. It’s also extremely boring.

Meanwhile, spiritual advisor and author Marianne Williamson spoke truth to power when she spoke about reparations for slavery. Every other candidate in the race has said, if elected, they will commission a study to look into the possibility of paying reparations. Not Marianne. She has a specific number in mind ($200-500 billion) and says reparations are payment for a debt owed, based on the promise of 40 acres and a mule for every family of four in the US. Williamson says,

“…anything less than $100 billion [for reparations] is an insult.”

Personally, I don’t think Williamson’s candidacy will go much farther after this debate. But I appreciate that she’s talking about cash payments. To me, reparations are specifically about the theft of capital from Black people for over 400 years. All the promises about commissions and incentive programs conveniently skip over this important point. In other words, as the great Rihanna once sang,

Here’s what happened on night two:

The second night was more of the same. Moderate Democrats tried to stand out but were unsuccessful. After a weak first debate performance, Vice-President Joe Biden came out swinging at Senators Kamala Harris and Cory Booker. Rep. Tulsi Gabbard (D-HI) also came for Harris. Harris, for the most part, did ok fending off these attacks on her record (mostly on health care and criminal justice) but her performance wasn’t as stellar as her first debate. Former Secretary of Housing and Urban Development Julián Castro had another strong performance, holding his own in an exchange with Biden about immigration. And Cory Booker had a solid performance, especially after Biden went after him about not doing enough about criminal justice reform when he was mayor of Newark, NJ. Also, Booker said what we already know,

“Too many Democrats stayed home in 2016 or were affected by Republican voter suppression or Russian interference. To win in 2020, we need to turn out Black voters, especially Black women, who are the heart of the Democratic Party.”

Others had so-so or unforgettable performances. And in a very weird twist of events, several candidates spent more time criticizing Barack Obama than Donald Trump. In a way, it makes sense. They are trying to take Biden down and the easiest way to do that is to link him to Obama. But this is a strategy that may not be effective in the long run. Obama remains incredibly popular among Democrats. And while Black folks may also have mixed feelings about Obama, we think about him the same way we think about our family members. We can talk about our disappointment with him in private, but that doesn’t mean others can talk dirt too. We don’t air our dirty laundry!

What’s next and what do the debates mean for Black women?

First, coming out of the debates, Biden is still the front runner. And he owes that mostly to Black voters. But if he wins the nomination, it won’t be because he deserves it. He is not the most progressive candidate in the race and so far, his vision has mostly been one that says he can take us back to civility and the days of old. I don’t think that’s good enough. We don’t want to go back to the days before Trump. We need and deserve better than that.

Second, moderate candidates may feel like a safe bet, but they only represent more of the same. All we’ve heard from the moderates is what they can’t do for us and how we need to win back independent and right-leaning voters. Ok, but then what?

Black women need a candidate who is bold and has big ideas that can change the status quo, not keep things as they are. For example, we need to expand access to health insurance, significantly improve public schools, make public colleges affordable or free, and immediately address climate change.  These are actions that will help everyone, not just a few. Moderates are spending way too much time thinking about getting votes and not enough time on what the American people truly need, especially the poorest and most marginalized.

Third, it’s time for some folks to drop out of the race. It’s great to have a diversity of identity, thought, and ideas. But we can’t sit through any more marathon debates where twenty candidates go in circles, especially when so many of them are going nowhere. We’ve seen the vast field, now it’s time to get on with the show. We deserve to hear more than buzz words and we need a debate where the front runners debate each other. Only 8 candidates have qualified for the next set of debates, so hopefully, the field will thin out. I don’t know about you, but I’m not sure I can do another 5-hour, two-night debate event!

What do you think? Who are your top choices and who do you think will be the best candidate for Black women? We’d love to hear from you!