What the Royal Marriage Meant to One Black Woman: Me 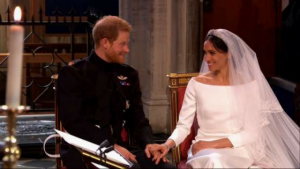 When I was coming of age in the late 1980s, a white friend told me that he would never consider an inter-racial marriage with a black person because the cost would be too high.  Having an inter-racial black family would be a real disadvantage in the business world. He knew for sure that a Black wife would have limited economic opportunities because of her sex.  Add race to the equation, and she’d barely earn enough to cover upper-middle-class household expenses. His career would also suffer. Promotions would be few and far between.  Really every aspect of life would be harder: raising children, socializing with co-workers, membership in any religious organization, and community involvement.  What rational person would sign up for such a risky proposition?

In today’s vernacular, my friend was saying was that there was no “value proposition” for falling in love with a Black person in the 80’s, so no thinking white person would allow themselves to do it.  “Marrying Asian” was a slightly different equation. Since the Japanese were buying real estate all over the country, we all feared that they were taking over America. Thus, the value proposition for an Asian marriage was potentially workable.  That was an inter-racial mix that could make sense.

I told my friend that his theories were offensive and reeked of racism, which was unfortunate because I had valued our friendship.  My friend said that I needed to wise up, and be strategic and “smart.” He wasn’t accepting racism and its ugly implications; he was just practical!

Our friendship ended, but my tough words did not end the story for me. These conversations taught me lessons about human beings that I found hard to ignore.  I already knew that because of my race and gender, I was seen as “less than” in many people’s eyes. Now, I had learned that because of my race I would never be good enough to overcome “bad economics.”  I had to reject this message along with the others to keep moving forward in my life’s journey.

I thank the Lord that people have evolved since those days. Racism, while still awful, is diminishing.

If I were coming of age now, I’d be doing it in a country that reveres growing numbers of black women for their excellence.  Black women like Oprah, Condoleezza Rice, and Michelle Obama are all icons in this country and are among the folks we admire most.  More black women icons are coming.  I’d also be coming of age in a world that talks about the effects of #BlackGirlMagic in business, elections and popular culture. Of course, we black women are mostly responsible for this new age.  We’ve led the self-love movement. Remember Whitney’s song, “The Greatest Love of All,” Iyanla Vanzant’s self-help books, and every episode of the Oprah Winfrey show? We also work hard and support each other in our victories and defeats.  Our actions are working for Black people overall. A young Black woman coming of age today can see more Black people who are passionately in love with themselves and each other, which is good for all of us.

While we have not yet received all of the respect and recognition that we deserve for our accomplishments, more Black women are breaking through and getting some of their props.

For me, Prince Harry Windsor and Meghan Markle’s marriage on May 19th was more, significant proof that the world is changing. Harry and Meghan’s generation, Generation Y, and the generations following them are not as focused on race as earlier generations. While racially aware, they strive to see themselves and other people as individuals first, which is a beautiful thing.  Because of this generation, a mixed race Black woman and a Royal can fall in love with each other and get married. The marriage is another strike against the belief that Black women are inferior.

I don’t know a lot about Meghan Markle, but based on what I do, I think I like her.  She seems like a thoughtful woman of color, who values all aspects of her heritage, including her Blackness.  She used her Royal wedding day to tell the entire world how much it means to her to be a mixed race, black woman.  The only member of her family who attended the wedding was her mother, Doria Ragland, a beautiful, dreadlock-wearing, Black woman.  In what was described by some as “a rousing celebration of blackness,” she chose Anglican Bishop Michael Curry, a black minister from the U.S. to speak at the wedding.  She also decided to have a black gospel choir sing to her Royal family and the entire world.  Prince Harry and his family fully embraced her and supported these choices.

I know that Duchess Meghan’s royal marriage won’t cause the whole world to pledge its love to Black women anytime soon, but it will likely inspire more people to see us as human beings, for which we all yearn. More important, it will undoubtedly help us to continue to see ourselves as powerful beings.

I am not the only African American woman, who thinks the future looks a little bit brighter for us because of this marriage, and what Meghan may come to mean to us. If Black women can see and believe that anything is possible for us, our futures become unlimited, and we can achieve even more.  News sources report that there has been a surge of interest in Meghan Markle by African American women because we find hope from the union.  An African American female observer said that Markle represents the kind of black woman whose life is not limited by preconceptions and arbitrary social boundaries.

“I find it inspiring,” she said.

On Power, Accountability & Building a Politics With Heart: An Interview with Aimee Allison

Stacey Abrams is Coming for Georgia!